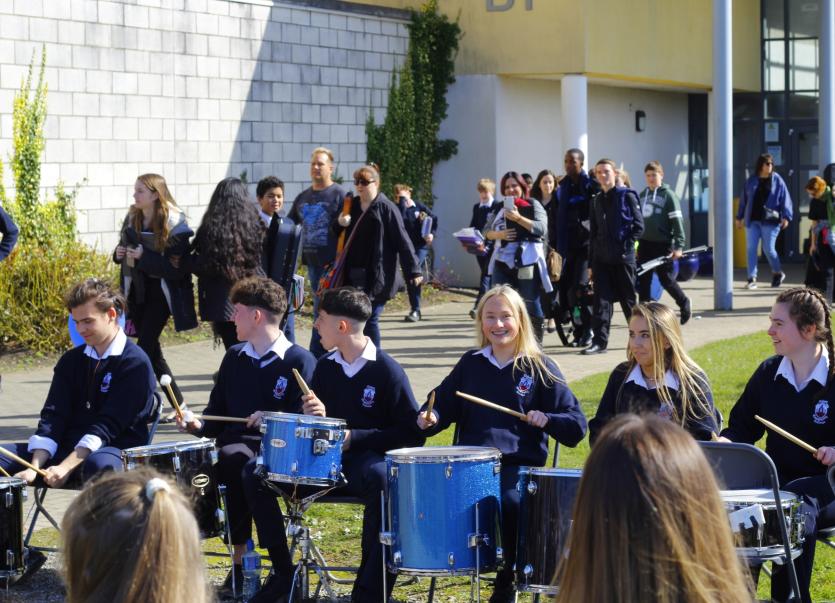 The visiting group, comprising 135 students, staff and parents, featured a very impressive choir, orchestra and wind band.
The American party had been travelling around Ireland with Encore Tours, and were welcomed to Ferrybank in glorious sunshine to the sound of the College’s Transition Year drummers beating out a warm Irish welcome. A large crowd had gathered to greet the US guests who were formally welcomed by music teacher Tammy Lapthorne and deputy principals Colm Rice and Helen O’ Connor.

Abbey Principal Michelle Jefford was unavoidably absent due to a bereavement, and condolences and messages of support were sent to her by staff and students of both schools.

The main feature of the afternoon was a concert featuring the Howard W Blake students under the direction of musical directors Dan Dubay, Jason Jerald and Jason Galeczka. The Abbey students were used to seeing American High Schools portrayed on television and were thrilled to experience the real thing as the US guests produced scintillating performances from their orchestra, guitar ensemble, wind band and choir.

In turn, the Florida youngsters were blown away by the amazing talent from the Abbey’s Music Department when the Trad Group, Brass Quartet and Senior Guitarists played up a storm.

One of the highlights of the day was the genuine and warm interaction between the Irish and American students who mixed and chatted freely swapping stories and comparing their lifestyles. The experience for all the young people involved will last a lifetime.

To commemorate the historic visit, the high school was presented with a framed bookmark specially designed for the occasion by GK Print, who also provided every student with a keepsake copy. K Sport, Glanbia Ingredients and Sun Life were also generous sponsors of the mammoth event.