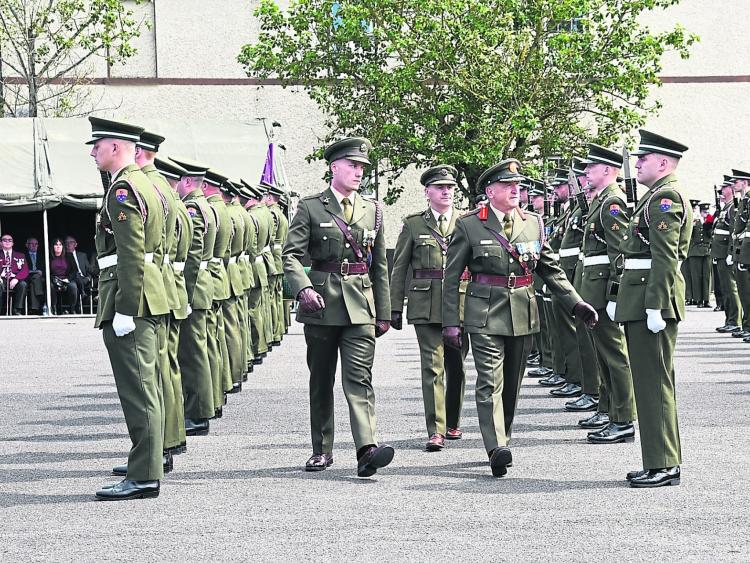 While Conahy man, Major General Kieran Brennan had an incredible military career at home and abroad, it was his kindness and his mentoring of fellow Kilkenny men in and out of the Defence Forces which punctuated his 42 years of service.
That was reflected by the huge turnout for him at James Stephens’ Barracks last Friday when he inspected the troops for the last time.
He felt it was time to reflect on the outstanding contribution that the barracks has made to Kilkenny life and the fact that 800 personnel are now stationed there.
Major General Brennan alluded to the great work carried out by the men and women of the 3rd Infantry Battalion during Storm Ophelia in 2017.
Many present felt that the army does not get proper recognition for its role in peace time and in supporting the civil power. Friday’s show of strength will do a lot to change that.
In a speech full of warmth and nostalgia, General Brennan forgot no one, remembering those killed in active service with the UN Peace Keeping missions or the part played by the Defence Forces in incidents like the showdown at Minister’s Cross, near Urlingford where dissident republican, the Border Fox Dessie O’Hare, was captured.
He picked out two men who helped his hurling career, Dermot Healy who made him captain of the All Ireland-winning St Kieran’s College senior hurling team of 1975 and Pat Henderson for giving him his chance and allowing him to go and win two senior All Ireland medals with the county, adding to the minor and under-21 medals he also holds.
He spoke of fallen comrades and one in particular, caught the attention, 32-year-old Pte Michael Dowling, Graignamanagh, who passed away in the Lebanon in 1998.
Record of Service
Because General Brennan is so low key it would be easy to forget his record of service. Tours of duty overseas on missions places like The Lebanon, Kosovo and Chad and serving as a military advisor to the permanent mission of Ireland with the Organisation for Security and Cooperation in Europe in Vienna.
It was great that Major Brennan’s two sons, Kieran and Shane, both serving officers with the Defence Forces were on parade with him on the square of the barracks while his two brothers, retired army officers, Canice and Gearoid Brennan, were also present as was General Brennan’s brother, Nickey who won senior All-Ireland medals with the county in 1982 and 1983 and former dual player, Paudie.
His nephews, Pte Eoin Fennelly, 3rd Infantry Battalion and Lt Stephen Brennan, Sarsfield Barracks, Limerick were on parade.
The general thanked his sister, Kathleen Meberman for coming from Hamburg with her husband, Wolfgang for the event and he also mentioned his other sisters, Ber and Bridget and Marian.
Former soldier, Cllr Joe Malone who attended the event said many people owed a huge debt to Major General Brennan for unseen acts of kindness over the years.
Brigadier General Brennan kept his kindest remarks for his wife Maria and didn’t forget his daughter Karen either.