Kilkenny city playground closed down due to anti-social behaviour 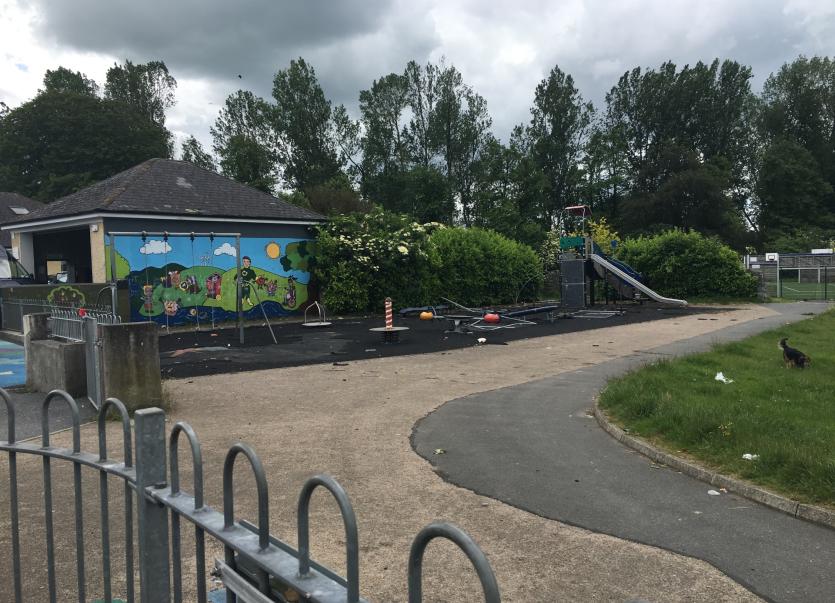 Mindless vandals have forced the closure of a city amenity for children.

The playground in the Fr McGrath Centre on St Joseph’s Road will remain temporarily closed pending a review of options going forward by Kilkenny County Council.

This decision has been made by Kilkenny County Council as a result of the increasing number of anti-social behaviour incidents in the playground over the last 12-months.

During that time the equipment and surfaces have been continually vandalised and damaged at a cumulative cost of €20,000.

The largest occurrence of such a nature took place a few weeks ago where substantial amounts of the worn out rubber matting on the floor of the playground were lifted and pulled out by vandals.

The interim barriers placed there because of damage caused were also torn down.

Gardai are now investigating this event and the lack of CCTV footage suggests that the event took place during the night time.

“We suspect that this was local teenagers even though it’s the neighbouring children that use it constantly,” said Stephen Murphy of the Father McGrath Centre after the episode. “They would’ve grown up and they would’ve used it so the damage is mindless and of course it looks like it’ll be really expensive to repair it.

Sean McKeown, Director of Services with Kilkenny County Council said the excessive expenditure incurred to repeatedly repair the damage being caused at the particular playground as a result of the incidents was simply not sustainable, especially in the context of a limited budget for Playground Maintenance.

“To put it in context, the €20,000 expenditure incurred in the last 12 months at this playground represents 25% of the total annual budget the Council have provided to maintain all 27 playgrounds across the County,” Mr McKeown said.

The short term loss of this playground will be deeply felt by the local community as many of their children would have been frequent users of its facilities.

The playing space was also enjoyed by young individuals who attended the Fr McGrath Centre’s homework club which provides education support and after school programmes to approximately 100 primary and post-primary school children.

The grounds were originally constructed 18 years ago and cost approximately €140,000 at the time.

All the funds for the development of the communal space were privately raised by the Board of St Canice’s Community Action.

According to Mr Murphy, the playground and leisure area around it was developed in response to a report published in relation to the growing obesity in Irish children.

Upon construction of the premises, the management was granted to Kilkenny County Council.

A smaller playground is available for children next to the nearby creche and this multi-use games area adjacent to the playground will also remain open to the public.