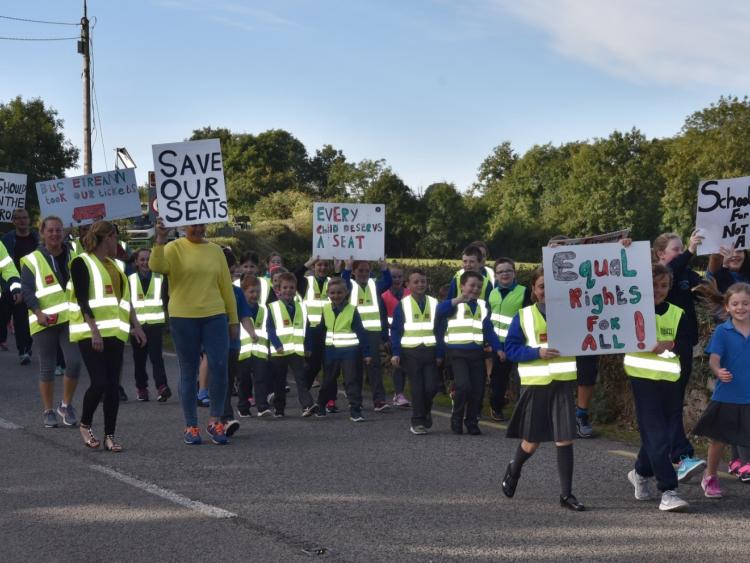 Local families are again having to make alternative travel arrangements at the eleventh hour after their children were refused a concessionary ticket on the schoolbus this term.

Among the areas once again badly affected is Ballyhale/Knockmoylan, where there are nine children left without a concessionary ticket, and school starting in a week’s time.

Local parent John Drennan was at the heart of a community campaign on this issue last year, when his four boys all missed out on a bus place. This year, thankfully, they have all been granted a ticket on the bus. However, neighbours have not been so lucky.

“It’s good news for us, but not for someone else,” says Mr Drennan.

“Other families miss out. I’m gutted for the people — I know what those people will have to go through for the next nine or ten months now, the inconvenience. They are working, they’re now scrambling to try and get people to look after kids and so on.”

In Ballyhale, a sense of disappointment remains. Little appears to have changed, despite the efforts of the likes of Mr Drennan, who left no stone unturned last year. The group there held protest marches (pictured left), ministerial visits, Dail visits, a media campaign, phone calls made week in, week out.

“It was all in vain,” says Mr Drennan.

“The whole thing is up in a heap. There’s nothing extra, nothing coming. It’s disappointing, we were given a commitment something would be done.”

Kilkenny councillor Pat Fitzpatrick has hit out at what he describes as the Government's 'continuing failure to address the urgent needs of rural communities'.

"The Government is creating an enviroment in which post offices are forced to close, rural policing has been slashed leaving rural communities vuneralble, rural businesses are falling way behind due to the lack of broadband and now we have children who can't access school transport" he said.

"Bus Eireann, The Department of Transport and the Department of Education are overseeing an unacceptable system which has parents distraught with worry wondering how their children will get to and from school. Rather than ensuring all children have a seat, they are rigging the rules so familys will not be eligible for the school bus service."

"I have been contacted by parents of chidren that have been traveling on school bus services for the last three and four years and now they have been told that their children don't have a seat on the bus for the coming school term. The Government needs to act and ensure Bus Eireann accommodate the children who now find themselves without a seat. If the numbers increase, services must increase. What is happening presently is absolutely unacceptable."