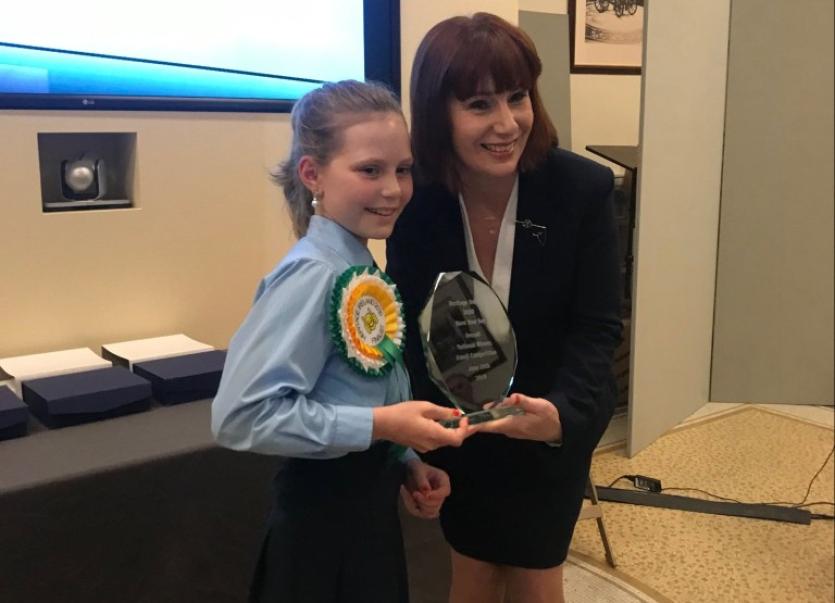 A young Kilkenny student has made waves with her artistic talents by winning a national heritage design award.

Laura Ryan, a fourth class student at Coon National School, won the national competition to design a heritage emoji. Her project depicted a helmet-wearing yellow smiley face, with a Viking longboat for a mouth.

Three girls from the North Kilkenny school entered the Heritage Ireland 2030 ‘Have Your Say’ competition to design an emoji that represents their heritage. All made it through to the regional finals. Laura was a winner at regional level, progressing to the national final, then winning outright.

“My emoji represents the Vikings when they tried to invade Ireland in the 9th Century, arriving in the boats,” she writes.

“The flag on the boat represents my local heritage colours — green and red.”

Principal of Coon National School, Eleanor Drennan, said everyone was delighted with the success. “We’re very proud of Laura’s achievement,” she said.

It wasn’t the school’s only success in the competition, with fifth class student Sarah Mooney coming third at regional level with her design also.

The competition was run by the Department of Culture, Heritage and the Gaeltacht. Minister Josepha Madigan, who presented the award to Laura, praised all the students who took part.

“It is really encouraging to see this level of passionate engagement with our heritage by our youth,” she said.