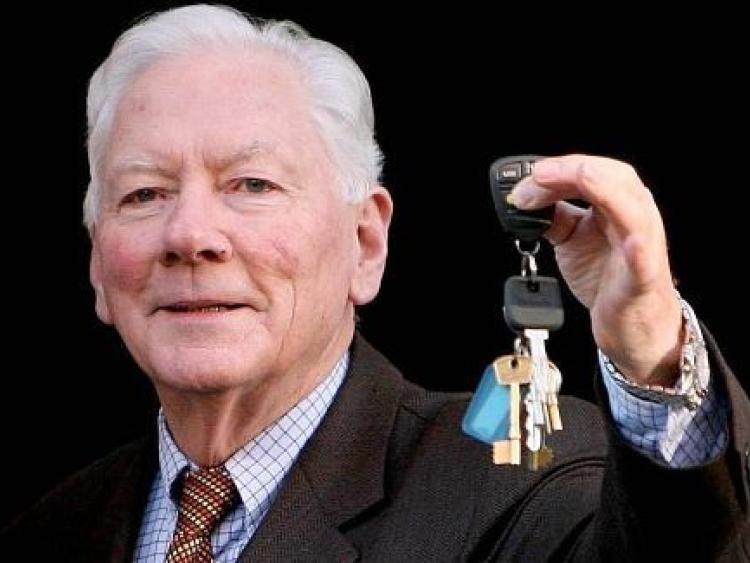 The death was announced this afternoon of the television legend Gay Byrne.

As he is fondly remembered across the country for his many outstanding TV moments, we remember this amusing incident when his car got a puncture in Thomastown!

This is from the Kilkenny People in December 2011...

GAY BYRNE was recently singing the praises of a Thomastown institution. Although the veteran broadcaster did praise Mount Juliet where he spent a couple of days it was Sim Treacy’s Hardware shop in the centre of Thomastown that he singled out as one of his highlights to his visit to Kilkenny.

A puncture had left Gay Byrne in need of a hand to get him back on the road. A trip into Kilkenny to get the repairs done was out of the question according to Mr Byrne because the parking in Kilkenny is “diabolically awful,” he said.

A local in Thomastown recommended that Mr Byrne try his luck in Sim Treacy’s Hardware shop. Gay Byrne had no idea what awaited him when he entered Treacy’s. “It is truly old-style grandad’s hardware shop, a positive cornucopia of hidden treasures, with things in boxes and shelves and hanging from the ceiling and stacked high on the floor and hidden away in corners, which hadn’t been disturbed in 40 years,” he said.

Despite his enthusiasm about the appearance of the shop Mr Byrne was sceptical of a hardware shop fixing bikes. His scepticism was short-lived with the puncture on his bike fixed and the tire replaced in minutes. The price for the services. A mere €5. A price that left the Montrose man flabbergasted.

Gay Byrne’s bike had obviously seen better days for no sooner had he been to Treacy’s to get the tyre fixed then he had to return to have a pedal replaced. Cycling between Thomastown and Bennetsbridge the pedal clip on his bike gave up the ghost after twenty years hard graft. He returned to Sim Treacy’s with little hope that the part he needed with be hidden amongst the myriad of amps, fuses, nuts and bolts that line the walls of the Hardware shop. Yet again Sim Treacy came up trumps. “So help me god he had a pair of the damn things - so long in stock that they were priced in punts,” said Mr Byrne.

The one thing that Treacy’s hardware doesn’t have is a computer. A pen, a ledger and long division were used to convert the price from punts to euro, Whether the price was adjusted for inflation is unclear.

A clearly impressed Mr Byrne recommended that anyone passing through Thomastown should stop in to Treacy’s. “They’d probably do you a lightly boiled egg and a few slices of buttered toast if you were stuck,” he said.