Kilkenny's buskers to face new bylaws in the new year 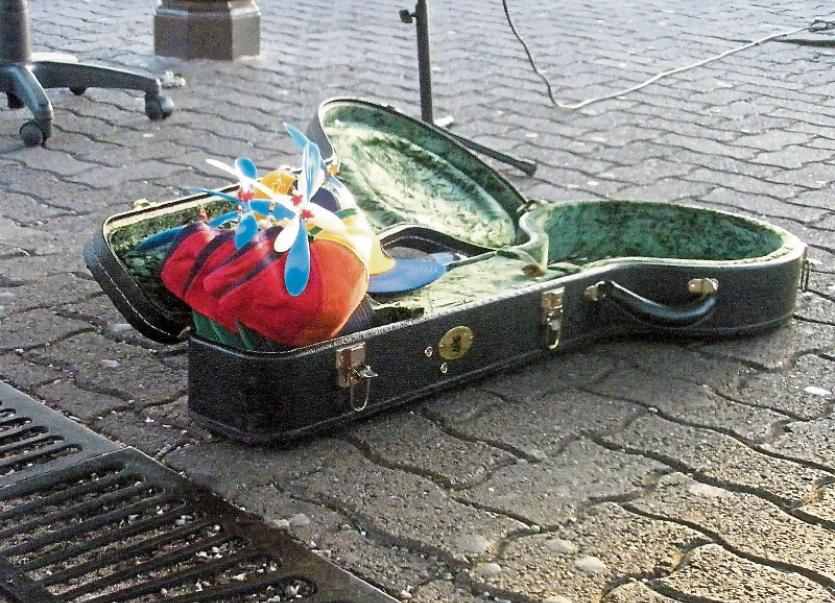 Buskers in Kilkenny City will face new bylaws in the New Year, after a draft has been subject to public consultation and been approved by councillors

New bylaws placing restrictions on buskers and street performers in Kilkenny City will be drafted in the new year, and public consultation will take place.

The bylaws, which will be similar to those in place in Galway, would place time limits and set out permissible hours of performance for street entertainers. They also look set to place a ban on the use of amplification.

Already proving controversial is a proposal to place a minimum age limit on musicians who are permitted to perform. One local councillor says that only those over the age of 18 should be allowed perform without adult supervision, while others are calling for no age limit to be in place at all.

At the November meeting of the Kilkenny City Municipal District, director of services Tim Butler circulated a summary of bylaws which exist in Dublin and Galway, along with corresponding by-laws proposed for Kilkenny. He said it would be looking more at Galway’s model rather than Dublin’s, as the latter had access to far more resources than Kilkenny would have.

The proposals so far for the bylaws set out that busking and street performance would be permitted between the hours of 10am to 8pm.

Mr Butler told local councillors it was not proposed to be prescriptive about where people can or can’t play, however, they must not obstruct public access or egress to a premises, and must not cause distress or offence to a business owner/occupier. He asked if the members wanted to exclude any one particular place, but warned this could cause difficulties.

The proposals also set out to curb the use of amplifiers and backing tracks.

“In Galway it’s more simple — it excludes amplification after 6pm. And looking at representations here, some members are looking to exclude any amplification.”

Mr Butler said some city premises have only single-glazed windows and noise can be quite intrusive. Once the bylaws are introduced, gardaí will have the ability to enforce them. However, in Galway and Dublin, community wardens have also been introduced, and that is something that would have to be considered, Mr Butler said.

Cllr Andrew McGuinness said the use of amplifiers was anti-social at the best of times. However, he said, “in some parts of this, we might be going a step too far”.

The Fianna Fail councillor said the fines being proposed were ‘substantial’, and there needed to be some discretion. He also asked if a tambourine or shaker was considered a backing track, and said percussion should be allowed until a reasonable time.

“The maximum amount of time someone can busk is two hours?” he also asked.
Responding, Mr Butler said this could be increased to three or four hours, however, Cllr McGuinness suggested there be no time limit at all.

Cllr Eugene McGuinness said that any time limits would be hard to police. Mr Butler said it was an issue that some shops had brought to members’ attention as problematic.

Cllr David Fitzgerald suggested it should be a maximum of two hours ‘at any one location’: “So you don’t have the same person outside your shop all day long,” he said.

AGE RESTRICTION
An age limit also forms part of the proposed rules, although this is already proving divisive. While some councillors welcomed the ‘no under 16s unless accompanied by a parent or guardian’ restriction as a child-protection measure, others said it could stifle young talent.

Cllr Joe Malone was of the opinion the minimum age limit didn’t go far enough: “Under-18 it should be,” he said.

Cllr Andrew McGuinness said he had a big problem with that. He said many younger people are better musicians than the adults.

“It’s a massive learning experience for them — I did it myself at 14, much to my parents’ disagreement,” he said.

Mayor of Kilkenny Martin Brett, who chaired the meeting, called for the age restriction to be taken out altogether.

However, Cllr Joe Malone again spoke on the matter, saying he had ‘a very serious reservation about young people on the street on their own’ and suggested it was irresponsible parenting to allow a 14-year-old on the street performing alone.

“If we are going to make these laws, we have to have restrictions on young people,” he said.

“I’m not going to sign up to anything to allow a 14-year-old out on the street unsupervised.”

Stop for funerals
Cllr Malone also said buskers should have to stop if a funeral cortege was passing through the vicinity.

“They should at least stop and respect the dead,” he said.

“We should have something saying they will cease for five minutes.”

Cllr Malcolm Noonan said everyone needed to be treated fairly, and said it would be good to put the proposals to public consultation.

Mr Butler confirmed the bylaws would go on display for public consultation once a draft was produced.

“What we are giving you here is an outline — we have to get legal advice and come back with draft bylaws, which may be January” he said.

“And then the public will have submissions they will want considered. We are not rushing into it.”