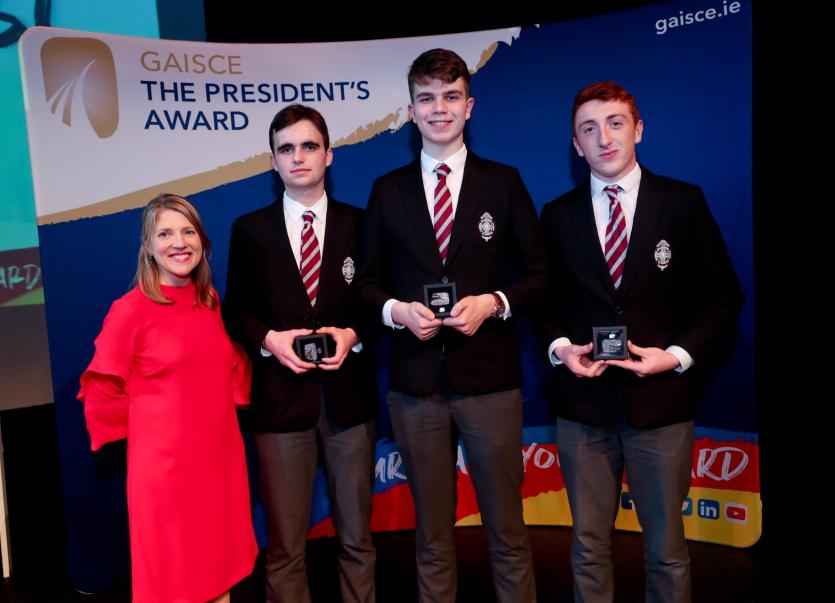 Three young men from Kilkenny were among the 148 young people from throughout Ireland presented with a Gaisce Silver Award at a special ceremony last week.

James Fitzpatrick, Eoin Maguire and Sam Coughlan from CBS Kilkenny were the three locals who achieved the award at one of the largest-ever Silver Award Ceremonies in Dublin, celebrating the achievements of young people.

Silver Awardees, who were honoured on the night hailed from nine counties across the four provinces of Ireland. They were celebrated for their commitment to personal development through community involvement, improving their personal skills and increasing their physical activity.

Each awardee successfully completed at least 26 weeks across these three Gaisce challenge areas and undertook a three-day adventure journey. For their adventure journey, Silver Awardees completed either a 50km walk or a 190km cycle.

Speakers during the ceremony included Olivia Porter, a Gaisce Awardee who received her Gold Award from President Michael D Higgins last December. The event was MC’d by Spin 103.8 DJs Graham and Nathan, and took place in the O’Reilly Theatre. The awards were presented by Yvonne McKenna, CEO of Gaisce.

“I heartily congratulate this evening’s awardees on their achievements,” said Ms McKenna.

“It’s fantastic to be honouring so many young people tonight for their dedication to personal development, and I think it’s a testament to the tenacity of young people today that we have so many awardees here tonight. I hope they have made lasting memories and gained invaluable self-knowledge through their Gaisce journey. Completing a Silver Award has required a significant amount of dedication and effort from each of them.”

Gaisce – The President’s Award is a personal development programme for young people which enhances confidence and wellbeing through participation in personal, physical and community challenges.