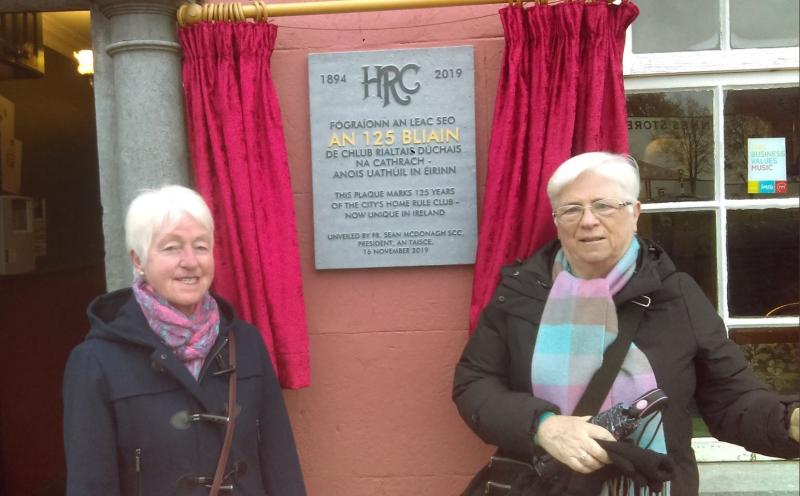 On the left is Kay Moran, whose grandfather Michael Dunne was a founder of The Home Rule Club, Kilkenny which celebrated its 125th anniversary of its opening today Patricia Bergin is on the right

The enduring links between the people of Kilkenny and Ireland's last surviving Home Rule Club situated on John's Quay, Kilkenny were reinforced this afternoon as a large crowd turned up for the 125th year celebrations of the club which is more popular than ever.

The anniversary was marked by the unveiling of a commemorative plaque by Fr Sean McDonagh, national president of An Taisce.

The plaque was donated by Gargans Monumental Sculptors, Friary Street, Kilkenny in honour of their grandfather, Matt Gargan who was a founding member of the club and a member of the first ever Kilkenny senior hurling team to win the three-in-a-row.

One unsung hero who attended the celebrations of the club which is much in demand was Sean Kerwick who did Trojan work to ensure it didn't close during a crisis of confidence some years ago.

The Club was formed in 1894 to support the Irish Home Rule movement. Today, the Club has no affiliations to any political party and is used as a social club. It is a hub for many social and cultural activities within the city, and hosts exhibitions, classes, concerts and other events.

Home Rule Clubs were once widespread throughout Ireland, and is the last remaining one in the country. If you would like to join and keep a living part of Kilkenny's history alive it costs just €10 per annum.