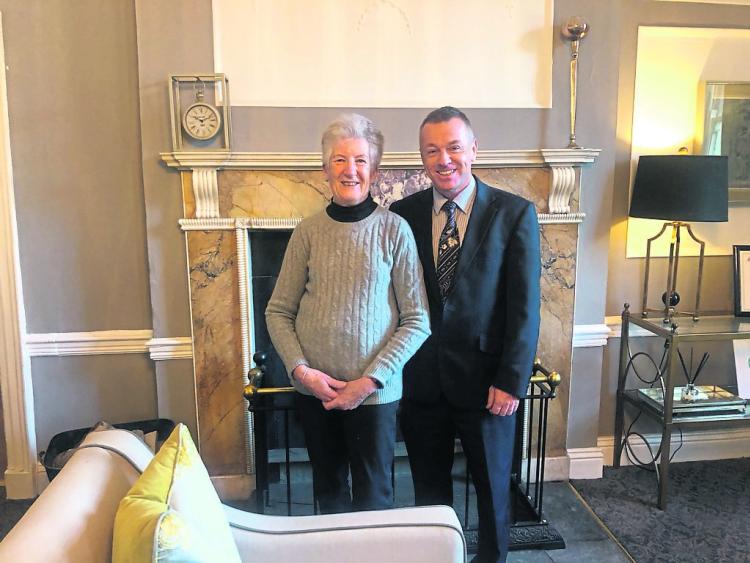 Civic Trust CEO Ciaran Conroy pictured with Caroline Roche, who lived in the Butler House from 1947 to 1971, and recently returned for a visit

After the city’s new Medieval Mile Museum, the second major undertaking for Kilkenny Civic Trust in recent years has been the transformation of 18th Century Butler House.
The house has been upgraded and renovated to open it up more to the public, with bed and breakfast, dining, and event space options. In recent weeks, a new healthy lunch menu has been launched at the Patrick Street venue, but more material changes are on the way also.
After being granted planning permission for a new lift in the building, plans are also in the offing to transform three offices into three new bedrooms, as Butler House looks to capitalise on an increasing demand for bed nights in the city.
CEO of Kilkenny Civic Trust Ciaran Conroy says the decision of the board to do so was the right thing at a time when others were battening down the hatches and weathering a recessionary storm.
“The marketplace has been strong, tourism numbers are good on national basis,” he says.
“There is a more discerning, willing to pay for it Irish domestic customer. The big changes here was we invested on bringing the food in the house; that meant we’d to build our own kitchen. We had to build our own restaurant upstairs.”
The Trust also decided to do some research into the public’s perception of Butler House.
“That was certainly revealing enough,” says Mr Conroy.
“Very often people would be passing Butler House and, you know, the front door was closed, was just the nature of it. Because it was a heritage listed building, we had to work closely with heritage officers to see was there a way we could satisfy the consumer but also make sure we protect the house.
“So we put that sort of open door, put in the sort-of foyer in there, we’ve done up significantly the foyer, we’ve brought the back office out to the front so people are feeling more welcomed.”
Each of the rooms supports top-range audio-visual equipment for meetings or events, and there has also been investment in things like signage and fittings, and windows, where modern conveniences such as double glazing and aluminium can be off the menu: “You’re trying to repair and restore and keep them the way they have always been, so there’s a lot of meticulous work to be done in that area,” says Mr Conroy.
Revenue generated by the Civic Trust is reinvested back into its Kilkenny projects — and this income stream becomes important when dealing with a heritage property. To the rear of the house, the paving stones have been replaced, and the terrace upgraded with new tables and chairs.
“We’ve invested significantly on an ongoing basis — it’s a journey,” says Mr Conroy.
“We’ve been investing in the bedrooms, the hallways, in lighting systems, making sure everything is compliant with fire regulations and all that. We put in a new bar, lounge area.”
A definite feather in the cap was the venue’s inclusion of the house in the Blue Book, which lists a collection of unique country houses, historic hotels
“We are the second only after Mount Juliet to have that, and it’s really, really good for us,” he says.
“It bolsters the business, and we are ahead of target on that in our first year, and I can see it growing and growing.”