Scientists of the future wowed the judges at national awards 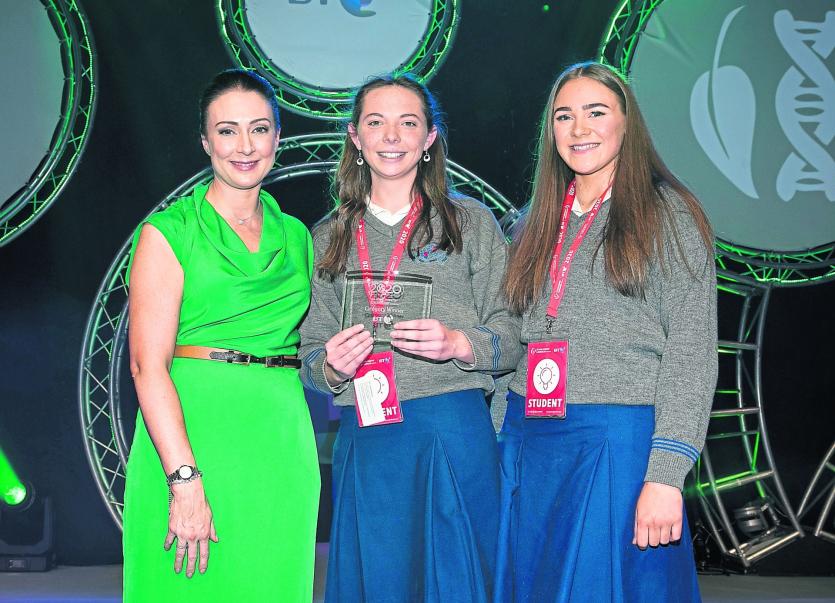 Kilkenny students swept the board at the BT Young Scientist and Technology Exhibition awards ceremony which was held in the RDS last weekend.

The young scientists, who are students at Kilkenny CBS and Loreto Secondary School, impressed the judges and took home four awards from the Social and Behavioural Sciences and Biological and Ecological categories.

A total number of 20 projects represented Kilkenny at the exhibition this year.

Kilkenny CBS’ project entitled the Investigation into the Effect of iPads on Academic Success was highly commended while the Loreto Secondary School received a similar accolade for their project which explored older people’s use of social media and smartphone applications.

Maebh Richardson, Lucy Harte and Ciara Cashin were also highly commended with their entry which looked at the impact of a behavioural change intervention on driver behaviour.

Cormac Harris and Alan O’Sullivan, both aged 16 and fourth year students from Coláiste Choilm, Cork, have taken home the top prize for a project entitled “A statistical investigation into the prevalence of gender stereotyping in five to seven year olds and the development of an initiative to combat gender bias”.

The coveted prize was presented to the winners by Minister for Education and Skills, Joe McHugh TD, and Managing Director of BT Ireland, Shay Walsh. Cormac and Alan presented their project in the Intermediate section in the Social and Behavioural Sciences category.

Minister for Education and Skills, Joe McHugh TD, said, “Congratulations to all the students at this year’s BT Young Scientist & Technology Exhibition and in particular to Cormac and Alan on their fantastic project, well-deserved winners. The atmosphere of excitement, creativity and fun at the RDS this week has been incredible. I am particularly pleased to see so many young people tackling some of the most important issues facing us, from climate change to health, to technology, ethics and societal change. The students are a credit to their families, schools and teachers and they should rightly be proud of being here. They are a huge inspiration.”

Other Kilkenny entries included an entry from Loreto Secondary School investigating if colours influence the choices teenagers make and a project from students at the Castlecomer Community School which investigated whether the myth that twins generally skip a generation is true, and how prevalent it is in our community today.

Another project from Loreto Secondary School included investigating and experimenting with fractals through mathematics and getting a greater understanding of fractals.

Students from St Kieran’s College entered a project called Hurling’s Winning Formula which was a statistical and comparative study to predict the outcome of senior inter county championship and senior schools matches while other St Kieran’s students researched the common injuries adolescents suffer while playing GAA compared to different sports.

There were also a number of entries from the CBS Secondary School in Kilkenny City which explored a range of areas. Entries included a mobile app that serves the purpose of making shopping in retailers quicker and easier for the consumer and a project which posed the question is greyhound racing ethical.

Students from Coláiste Pobail Osraí investigated the opinions and experiences of teenagers with social media applications and its impact on their self-esteem.

Climate change and the need to act now was very topical at this year’s exhibition and students at the Loreto Secondary School entered a project called Tacking Climate Change through Plastic.

The group created a biodegradable and eco-friendly plastic made out of natural ingredients and combined it with formaldehyde to make a durable.

Another interesting Kilkenny entrant was from pupils at the CBS who explored the correlation between memory and the senses while pupils from St Kieran’s College examined whether organic food is better for the environment and delved into the associated farming aspects.