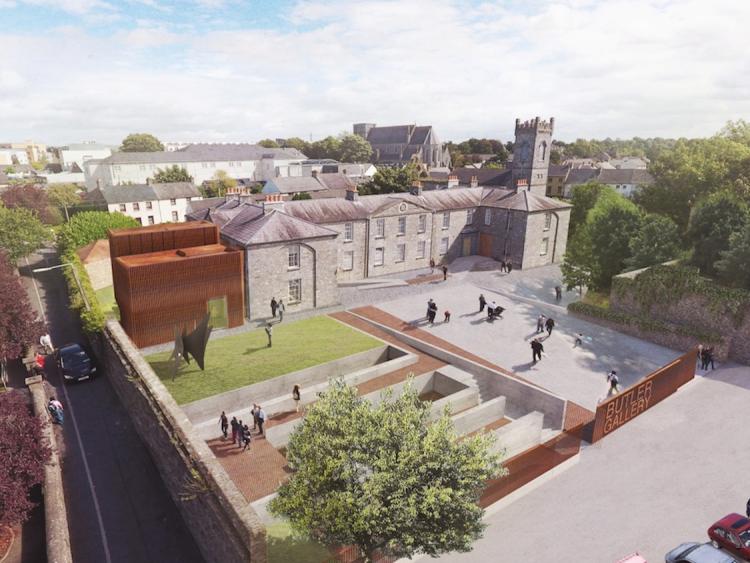 This summer people will be able to celebrate a new public space in the centre of what will become the focal point of the artistic/cultural quarter of Kilkenny city.
The magnificent new Butler Gallery at Evans’ Home, located on a site nestled between John’s Quay and John Street, will open its doors to the public.
It has already transformed this area of the city and what was a dilapidated old house has become an architectural gem.
It has and will continue to give this part of the city a major boost and provide businesses and potential investors a ray of confidence at a time when the country could do with some good news.
The nationally important Butler Gallery will move into Evans’ Home, giving it the space in which to accommodate one of the finest collection of modern and 19th Century Irish art in the country.
The Gallery will have 10 times more space, allowing it to present its extensive and important permanent collection of 20th Century Irish art, including rarely-seen work by Louis le Brocquy, Paul Henry, Mainie Jellett and of course the works of Kilkenny-born and bred, Mildred Butler.
However most excitement centres around the wing dedicated to Callan artist Tony O’Malley.
His work never goes out of fashion and some of his earlier paintings in particular are haunting yet breathtaking.
The gallery will have four permanent collection galleries, including a large contemporary art gallery.
An education and learning centre will be a huge resource to young and old and the ultra modern media gallery should arouse a lot of debate.
Add to that three beautiful gardens, as well as a café including an outdoor seating area with views of St John’s Priory, and you have a little slice of Eden in Kilkenny.
The permanent collection, which has spent over four decades in storage, will finally be displayed.
The gallery will increase the Art and Learning Opportunities available in the south-east while bringing an architecturally significant building back to life for everyone to enjoy.
The collection
The Butler Gallery Collection was established in 1942 by the Society for the Encouragement of the Arts in Kilkenny, or as it later became known, the Kilkenny Art Gallery Society.
The collection has grown from a modest collection of 19th Century watercolours, many of which were donated by George Pennefeather in 1943. Purchases, gifts, loans and bequests have all combined to make what is now a collection of over 400 works.
The collection has been helped substantially by bodies such as the Contemporary Irish Arts Society and the friends of the National Collections along with a number of generous individuals who have donated many fine works to the collection.
The collection is a rich archive to which the inquisitive eye may turn and return. Including loans from the Sir Basil Goulding Collection and private collections, the Butler Gallery Collection is an eclectic catalogue that can be read and appreciated on many levels.
In 1975, the gallery took up its present accommodation in the basement of Kilkenny Castle where a major contemporary art gallery has flourished. Exhibitions of critical acclaim mounted over the past 40 years include Sean Scully, Antoni Tapies, Bill Woodrow, Sol le Witt, Brian Maguire, Tony O’Malley, Tony Cragg, Petah Coyne, Paul McCarthy, Eve Sussman, Jeanne Silverthorne, Louise Bourgeois, David Sandlin and Barry McGee.
The Kilkenny Art Gallery Society, trading as the Butler Gallery, owns the Permanent Collection. The Butler Gallery is a model of what enthusiastic commitment can achieve. The collection provides a credible account of the evolution of 20th Century art in Ireland, and its exhibitions have put Kilkenny firmly on the artistic map. Most importantly, it provides proof positive that regional organisations have a major part to play not only in terms of their own environment, but in enriching the cultural life of the country as a whole.