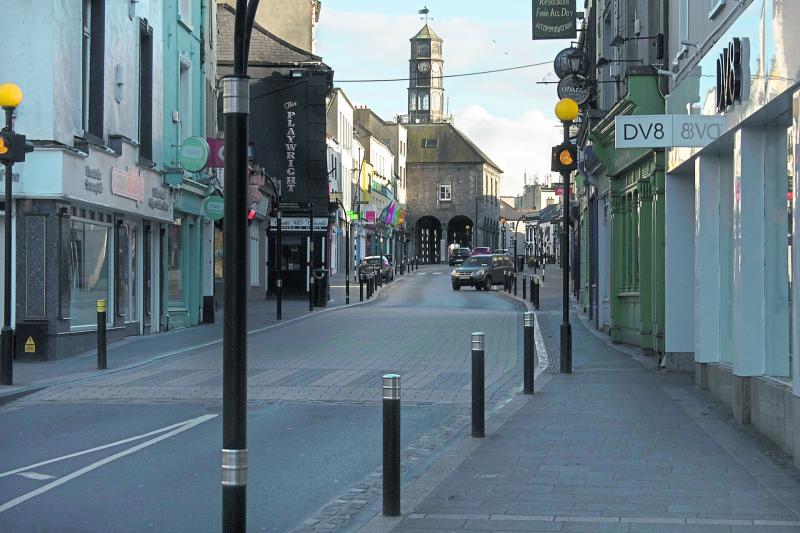 New solutions are being considered for Kilkenny City centre to help shops and businesses when Covid-19 restrictions are eased, and to kickstart the local economy.

Chief among them is a temporary one-way system to be implemented on High Street, and potentially other streets also. It would set aside more of the roadway for pedestrians to help people comply with social distancing etiquette as businesses reopen.

The plan could involve hundreds of new bollards and flower planters, as well as changes to road markings. The city centre taskforce is due to meet officials from Kilkenny County Council today (Wednesday) to discuss some of these possible measures. Local councillors have also been briefed.

Six different scenarios are on the table, with each having varying numbers of streets to be included in a one-way system, and in differing directions. The council is analysing these six to see which has the greatest potential in terms of providing for social distancing while minimising the negative impacts on vehicular traffic.

Director of services for Kilkenny County Council Tim Butler has stressed that no decision will be made without consultation with retailers and businesses.

It would also see Ormonde Street become one-way from Patrick Street to Patrick’s Court, and pedestrianisation of James’s Street from Market Cross to High Street during hours that are compatible to allow for deliveries to businesses.

Local councillor Joe Malone has expressed his support for this scenario, and says it could make a key difference in allowing people move around more freely. This in turn would benefit local retailers.

“I think it’s worth trying because it could give the city traders a lift,” he said.

“It is only for a temporary trial period. It might be positive and help with social distancing — it needs to be safe for people walking, older people, people with wheelchairs or buggies.

“I’d like people to have a say on it, and I’d like to thank city engineer Ian Gardiner and the council staff for bringing the plans forward.”

Business owner and member of the city centre taskforce Pat Crotty has said there are varying views over proposals to alter how our streets currently operate.

While businesses are receptive of any measures to return footfall to the streets of Kilkenny, there is some apprehension that with fewer cars, the city might feel emptier. These concerns will be outlined at the meeting today, where they may be allayed with the provision of more information.

“There’ll be no visitors — we have no tourists, we have no anything else that helps create the buzz in Kilkenny of a summer’s day,” said Mr Crotty.

“So there is a concern that instead of helping business to recover that you would actually create the wrong impression entirely that Kilkenny looks like it’s shut down.”

There is also the opposite view. Some cities in Europe are creating large pedestrianised streets to facilitate social distancing and outdoor seating, spaces for people to mix and queue. This may not be as straightforward here, with weather less predictable, but conditions in recent weeks have augured well.

The taskforce has only had one meeting since it was established, and now finds itself presented with a challenge it could never have anticipated. Consultation will be key.

“I’m happy that both the members and the executive are prepared to listen,” says Mr Crotty.

“I’m not sure that there is enough content yet, as in enough for them to listen to — as in consensus among the traders. This city centre taskforce had literally had its opening meeting, a brainstorming session, and then had begun to listen to the executive. Because you need information before you can start to make educated decisions.”

COST
Depending on which scheme, if any, is selected, the cost of implementation will vary. If a scenario including just High Street were selected, it would be expected to cost around €35,000. If the most far-reaching scenario were chosen — including High Street, Rose Inn Street, Ormonde Street, James Street — it could cost up to €60,000 to implement.

Other measures also being considered include extending the hours that Kieran Street is pedestrianised, so that it is compatible with opening hours of cafés and restaurants that operate outdoor seating areas on the public space.