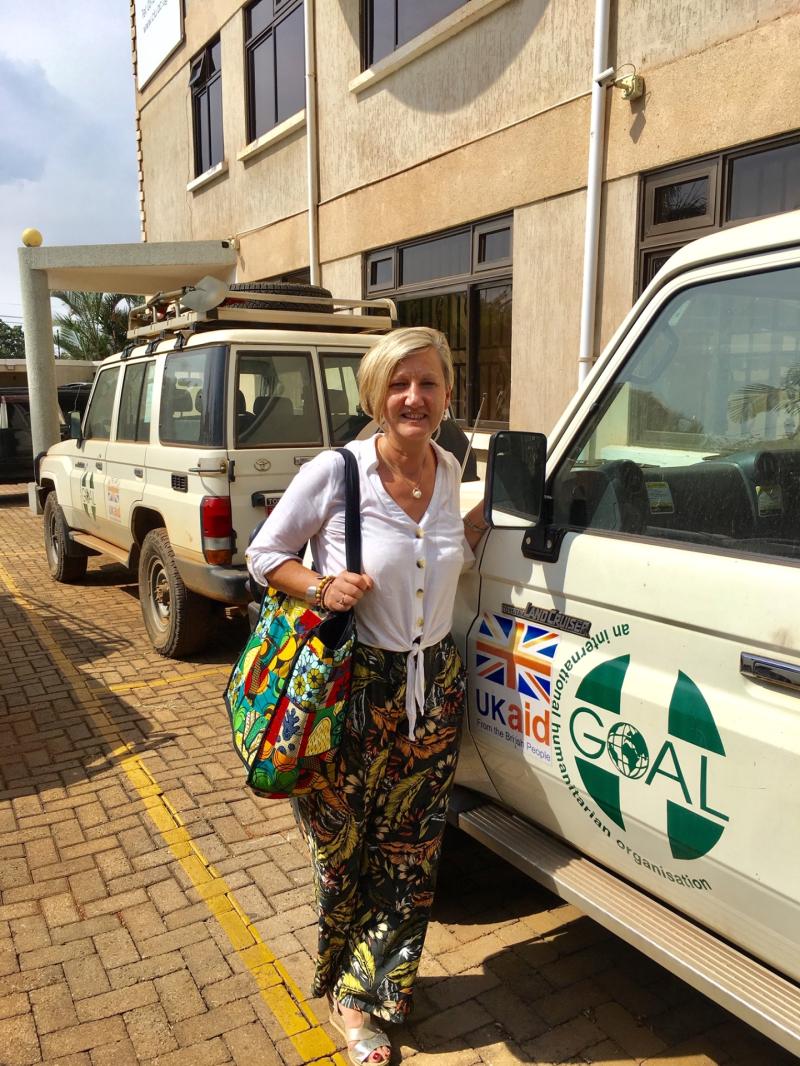 Irish humanitarian aid agency, GOAL, has reached over 9 million people in its 13 countries of operation in Africa, the Middle East and Latin America since the Covid-19 crisis emerged in March.
GOAL Senior Communications Manager, Miriam Donohoe, who is from Goresbridge, Co Kilkenny, said this week the scale of the Covid-19 pandemic is like nothing the world has seen before.
“What really makes this crisis so different and challenging is the fact that we are dealing with a crisis in all countries. Usually an emergency we would be responding to – such as a cyclone or weather-related disaster, a famine, an earthquake – would be confined to one country. But in this case we are dealing with a crisis in all of our countries of operation.” she told the Kilkenny People.
“With previous emergency responses we would be able to send staff from Ireland and from other countries where we work to the centre of a crisis to help. And we would be able to get equipment and supplies into countries. With COVID-10 this is not possible. For one with travel restrictions we cannot deploy staff.”
She said Ireland and developed countries with sophisticated health systems and Governments that were able to provide economic packages for those who have lost their jobs are finding they are under massive strain and are being overwhelmed by Covid-19.“So you can imagine if developed countries are finding it hard to cope what it is like for countries where GOAL works with weak and sometimes non-existent health systems, and no financial supports. These countries are already in crisis facing drought, food shortages, and conflict. It is unthinkable the impact if the virus really gets a hold,”
While the virus is still in relatively low numbers in Africa, GOAL is supporting communities with awareness and education on social distancing and hand hygiene to prevent the spread of the crisis. “It is in all of our countries of operation, but thankfully so far Africa has not been as badly hit as we expected. Our worst hit country is Turkey where there are 120,000 cases and more than 3,000 deaths”
“The scale and speed of infection is devastating, as is its capacity to take lives, destroy economies, and put an enormous strain on resources in even the most capable healthcare-systems in the world. Whatever chance countries like Ireland have to cope with Covid-19, it has the potential to have a catastrophic impact on millions of vulnerable people living in the developing countries in which GOAL serves.”
She said the real fear is if the virus hits refugee camps where large numbers of people are confined to small areas. “For example social distancing in these contexts will be nearly impossible”
Of special concern is Idlib in North West Syria where GOAL is supporting more than 1.1 million people who have been displaced from their homes due to the war there.
“In total in Idlib there are more than 3 million displaced people in an area the size of Co. Galway. To date the virus is not in this area, although there have been cases confirmed in southern Syria. But if it takes a hold it could be disastrous.”
So the main focus of GOAL’s work at present is to educate communities and support them to stop the virus.
It was clear in mid-March that Covid-19 was spreading around the world and was going to affect all of GOAL’s countries. A Covid-19 Task Force was established which meets three times a week to oversee response activities. The Task Force includes senior staff and representatives of GOAL’s countries abroad, including Miriam Donohoe.
GOAL was at the centre of the international response to the Ebola outbreak in Sierra Leone in West Africa in 2014 where it used a Community-Led Approach (CLA) to respond. GOAL is adopting this approach in its Covid-19 response which sees GOAL working with communities developing action plans at local level to isolate and shield those most at risk, and manage cases of infection. This will involve offering practical household hygiene guidance and supporting communities to plan controlling their movements and still be able to sustain their daily income.
Covid-19 is confirmed in GOAL’s 13 countries. The worst hit is Turkey where more than 100,000 cases have been confirmed and almost 3,000 people have died. In its African countries the virus has not spread as quickly as originally feared.
Since it started its response has reached more than nine million vulnerable people across its 13 countries.
Of this almost 1.4 million with Covid-19 have been reached in communities with Covid-19 preparedness and hygiene messaging, whilst more than 7.5 million have been reached through radio ad campaigns in Zimbabwe, Sierra Leone, Ethiopia and Uganda. The Zimbabwean broadcast campaign was supported with funds from Irish Aid.
In addition GOAL has Distributed 20,000 hygiene items, including soap, to households in nine of its countries; Increased the capacity of health centres in South Sudan, Sudan, Ethiopia and Sierra Leone to implement infection control measures to over 2.3 million; Supported 10 health centres in Malawi with hygiene materials; Helped almost 30,000 people access safe water in Sierra Leone and continues to provide over 900,000 internally displaced with water in Syria; Reached over 40,000 people in Uganda and Honduras with WhatsApp social media messaging
“This virus has rapidly spread from East to West and is likely to overwhelm weak or limited healthcare systems. The key to containing this problem is education on prevention and community engagement, and helping to sustain incomes. We need to act now to help vulnerable communities prepare,” said Miriam Donohoe.
“As the pandemic spikes in the coming weeks and months, it will become much more difficult to reach the affected areas and communities and critically needed supplies will become more difficult to secure. We are responding as quickly as possible to help prepare the most vulnerable people for the coming outbreak. Our response plans will be implemented in partnership with Governments and Agencies as we partner for maximum impact and we will adapt according to needs as they emerge”.
Anyone who wants to support GOAL’s work can donate at goalglobal.org