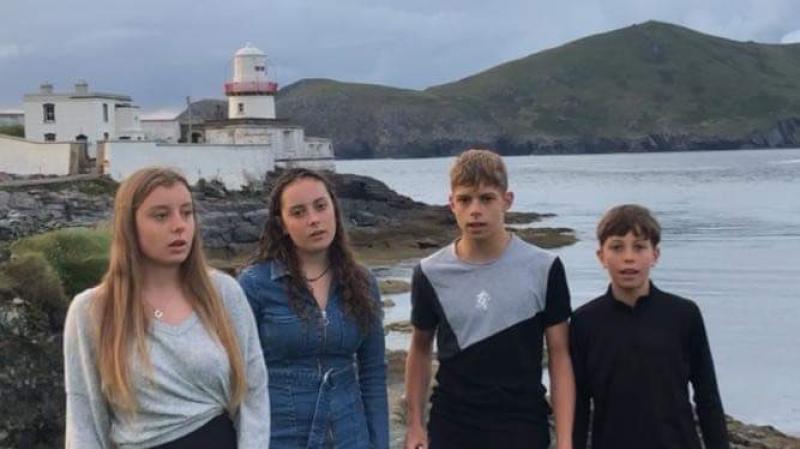 A group of talented Kilkenny musicians have spent their time very productively during the recent lockdown and have completed a number of songs and videos and have received national recognition for their work.

Burnchurch (named after their home townland) are a band who recently won a prestigious song competition being run by Conradh Na Gaeilge and 2FM with their entry, “An Chorán is an Chrois” .
The teenagers were the youngest entrants in the competition and beat off stiff competition including winning a head to head with the famous Coláiste Lurgan crew.
The background story to the song they’ve written is extraordinary. A chance encounter with two of O’Casadaigh clan (Éanna and Ruarí) at a Turkish barbers’s shop in Dean Street set things in motion.
The O’Casadaigh family are Irish speakers and the lads were speaking in Irish while they waited ,which prompted a conversation on the respective Irish/Turkish and Catholic/Muslim cultures with the (Turkish) owner and his telling of a little known connection with Ireland in the 1840’s.
Essentially, a Muslim nobleman from Turkey was so affected with the Irish famine that he sent aid to the country, a massive gesture about which very little was known.
Sultan Kelif Abdulmejid was the ruler of the vast Ottoman Empire. He was just 23 years old when, in 1847, he heard of the suffering and terrible loss of life through hunger in Ireland. He decided to send ten thousand pounds in aid, a colossal amount at the time. Queen Victoria was not best pleased, having given only a fifth of that amount. To avoid embarrassment, she persuaded the Sultan to reduce his donation to one thousand pounds, to which he reluctantly agreed.
However, he felt the need to do more, and so he secretly sent five ships full of food to the smaller port of Drogheda, in order to avoid detection.

Tragically, Sultan Kelif Abdulmejid died just five years later from tuberculosis.
Eanna and Ruairi O’Casadaigh, delved into the story and composed the song around this marvellous story. The tragedy of the Sultan’s early death adds to the great sadness, and their determination to keep his memory alive, and to remind the youth of today how in our darkest hour, when our Christian neighbours did little or worse, a faraway Muslim Sultan could not let it go. It also had a type of parallel with the recent discussions and refugee experiences of Direct Provision, a significant proportion of whom would be Muslim. The song which the lads wrote is called “An Chorán is an Chrois” or “The Crescent and the Cross”, which refers to the idea that neither religion nor race was an obstacle to his kindness. They hope to keep his memory alive. Since their win, the group had formal contact from the Turkish Embassy who are very interested in publicising and promoting this song and the story behind it.