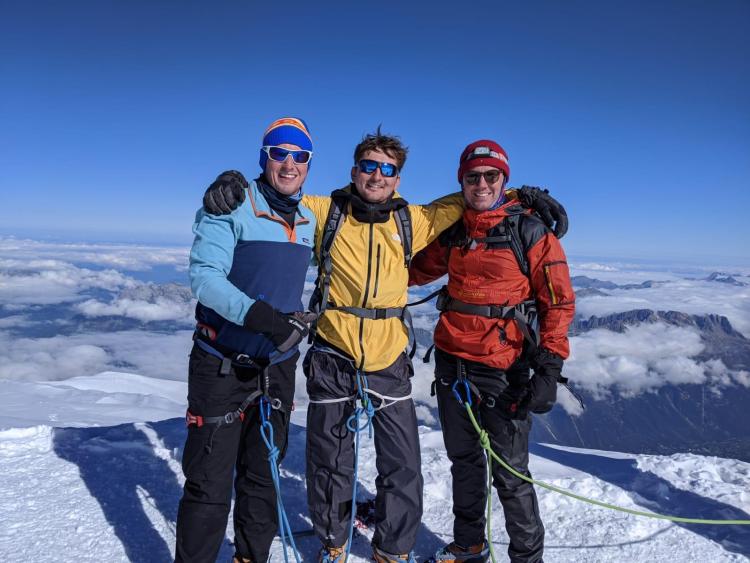 The three Kilkenny school friends who set off to tackle one of Europe’s tallest peaks to raise funds for local mental health charity Teac Tom have returned from their expedition unscathed.

“We made the summit and nothing went awry,” Liam confirms.

“It was great, very difficult — the altitude is something you can’t really prepare for. You get up there and figure out how you are going to be, and either you cope with it or you don’t. So, we were all okay with that, and all those that went made it. The whole thing — especially the day we did the summit — was one of the hardest things I’ve ever done, you can’t breathe.

“There’s no air up there, you’re just looking at the guy’s boots in front of you, just keep putting one foot in front of the other, you don’t look up at all. You think ‘oh this is Mont Blanc, this is the summit’, but then there is another one in behind it, and anther one behind that.”

“I was blown away by the support and we're all incredibly grateful for every donation, kind message and helping hand we received in getting such an important message out there.”

While many people attempt to tackle the mountain, not all of them actually make it to the top. The lads managed to push through their comfort zone and cope with the altitude.

“I think we were quite lucky that for whatever reason none of us got altitude sickness, and we just kept going and all made it,” says Liam.

Before deciding to embark on the ‘Climb For Hope’, the trio had little mountain-climbing experience. They trained   on a variety of Irish peaks over the past few months. Mont Blanc is around 4,800m, and the trek took three days, with several days of eye-opening training beforehand.

“The first two days we did training they really tried to scare us with the heights and stuff, to see how we were, if wed hold up kind of mentally,” says Liam.

“Some people just kind of freeze and say ‘I’m not going any further’. A lot of the ledges you are walking on are really just the width of your boots. So it’s very intimidating if you’re really bad at heights.”

Chosen charity Teac Tom is a cause close to their hearts. Around two years ago, they lost a good friend to suicide.

“I think if we hadn't done it for charity we wouldn't have all made it up,” Liam confides.

“But for me, there was the whole thing of who I was doing it for, that kind of was front of mind the whole way, and it made it so much easier. You feel like you’re doing it for something bigger than just climbing, there is so much more to it.”

Since their return, the event’s fundraiser page has been given a lift; they have actually surpassed the original €4,000 target, with more than €5,500 at time of print. The fundraiser will stay open until October 8, and people can support it here.