High praise for Abbey Community College’s Student of the Year

It's the highest honour the school can bestow 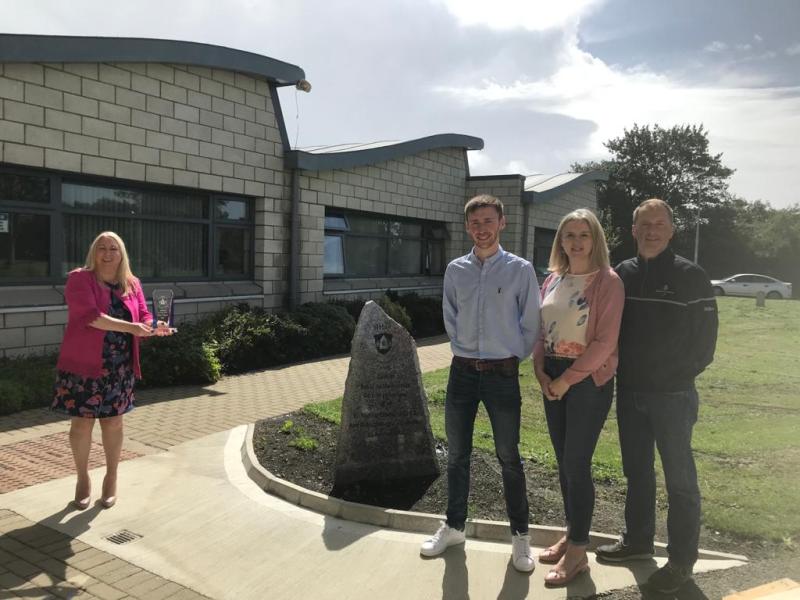 Ms Pauline Egan, Director of School KCETB presents the Student of the Year 2020 Award to Seán Hogan and his parents, Catherine and John Hogan

High praise and glowing tributes have been paid by staff and management of Abbey Community College to the school’s Student of the Year for 2020, Seán Hogan.

To be named Student of the Year at Abbey Community College means that the entire school community wishes to pay tribute to a student who epitomises and represents the best of what the school is.

It’s the highest honour that the school can bestow, and is presented to someone who is hardworking and competent, most co-operative and always courteous and respectful to staff and peers.

Seán arrived into first year in 2014 as an enthusiastic and well-behaved young man and has developed into a truly exceptional person over the course of the past six years. From the moment he walked through the gates of the Abbey, Seán has been central to the life of the school and has engaged wholeheartedly with all aspects of Abbey Community College.

Academic work was always completed to the highest standard and school reports since first year consistently note Seán as an excellent student and a pleasure to teach. While winning ‘Best Student’ in his class every year, his main area of interest has been in the sciences. Seán and his team mates participated in many science based competitions including the Junior Science Olympiad and winning the WIT Applied Maths and Engineering quizzes.

Seán’s Leaving Certificate Results have reflected his abilities, gaining him seven H1s and 1H2. Seán has always been eager to go above and beyond the curriculum. He played an active role in school leadership. He was elected as a class prefect for his first year class and then went on to become the Head of the Student Council. On many occasions, he volunteered his time and enthusiasm to help fundraise for local charities and to raise awareness around important issues.

Seán is an accomplished speaker and has been called upon to speak on behalf of the student body on many occasions. An avid debater, Seán represented the Abbey in debating at Junior and Senior Level in both English and Irish language competitions.

Seán can be described as a ‘Renaissance Man’, having an impact on many different subject areas and organisations in our school. His quest for social justice and the importance of the student voice continued as part of his role as ‘Justice Group Management Liaison Officer’. He was instrumental in bringing many acclaimed speakers to the school concerning topics such as human trafficking and animal rights.

“The Abbey Community are massively proud to name Seán as our Student of the Year 2020,” said the school. “We wish him well in everything that he does and hope that the life lessons, friendship and education he received in the Abbey stay with him forever.”