A champion for Kilkenny's biodiversity cause, with exciting times ahead 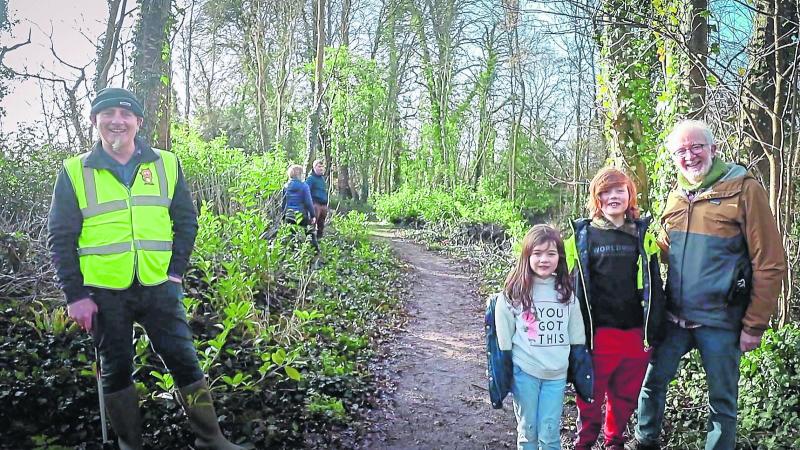 The new chair of Keep Kilkenny Beautiful (KKB) Pat Boyd will have a busy year ahead of him as he has been awarded the title of St Patrick’s Day Biodiversity Champion of The Year.

He received the accolade from Minister of State Malcolm Noonan on behalf of the St Patrick’s Day Parade Committee and its chair Councillor Joe Malone.

Mr Boyd took over the KKB role from Peter Bluett earlier this year, a great honour for him.
While the ‘B’ stands for ‘beautiful’ — the group has a broad scope and ambition, given the numerous challenges faced by our environment — perhaps just as relevant a declarative name today would be ‘Keep Kilkenny Biodiverse’.

The global challenges of climate change, biodiversity loss and the proliferation of plastic in the environment are very much on the group’s collective mind. They have a number of initiatives under way or in the works to make vital interventions.

“We are actually going through the sixth mass extinction,” he said. “Just look at our bees — two thirds of our 98 bee species are under threat of extinction. Invasive species have a big impact on biodiversity loss.”

One of the things the group have been doing to help is tackling the growth of invasive vegetation such as Himalayan Balsam along the riverbanks.

“If they aren’t managed they just take over and create a canopy on the riparian zone of the river and nothing else can compete then under that canopy because they just don’t get light,” says Mr Boyd.

“So if we want our native species to come back and support native biodiversity, we have to manage those invasive species. We are doing that very successfully in Kilkenny. We started off five years ago and manage about 24km of riverbank from the Weir on Bleach Road down to Maddoxtown, and then the Breagagh and Pococke as well.”

The problem with the balsam is that when it dies back in the winter, it leaves the bank exposed and prone to erosion. With no native plants to bind it together, the banks erode and sediments wash into the river, affecting the gravel banks and the ability of fish to spawn.

Every Monday night from May on, they target an area to remove the invasive species.

WATER QUALITY
Water quality in Kilkenny’s rivers is also a major concern, and Mr Boyd says there is evidence to show it has been deteriorating over a number of years.

A number of the volunteers availed of training by Norevision, sponsored by LEADER and LAWPRO, in river conservation. Part of what this involves is called ‘kick sampling’ — disturbing the substrate in a waterway, and with a net catching what is released — the invertebrates and life on the bottom.

An absence of some pollution-intolerant inverterbrates suggests there is pollution in the river.

“If all three are gone, you know things aren’t good. It’s a very reliable, internationally-used technique,” he says.

“So we have been doing that up and down the River Breagagh and the Pococke.”
A ‘traffic light’ grading system is used.

“All the samples we’ve done on the Breagagh and Pococke are very much in line with the EPA’s river survey in that all our samples were amber. In other words, the water quality on our local streams is very much compromised and the aquatic life is threatened.”

“I was pretty disappointed with one of them anyway, on the Pococke, where we found there was a further deterioration within less than a year of the water quality in the river,” says Mr Boyd.
KKB is hoping to create awareness of that and see if the powers-that-be will implement the appropriate measures that will improve our waters and return them to having good ecological status.

WELLBEING
Furthering the promotion of biodiversity, the group is also launching a new initiative, the St Patrick’s Biodiversity Wellbeing project.

They will be taking on five residential homes of residents of St Patrick’s on the Kells Road. Some of the gardens would currently be lacking in terms of flora and wildlife.

“We are going to transform those gardens into pollinator and biodiversity havens,” says Mr Boyd.

“We are going to plant them up with the residents and carers in those homes and that will bring biodiversity — birds, bees and butterflies — all the beautiful things in nature into their lives.”

They hope to run that every year and include others in the coming years.

There is also a ‘gardening with nature’ programme’, which initially had places for 10 participants’.

“That’s all about food production in your garden, apple trees, fruit trees, and gardening with nature. Not using chemicals or pesticides — just doing things naturally,” he says.

“We got great uptake on that as well and are hoping to roll it out again next year.”

ACHIEVEMENTS
Mr Boyd is conscious of the body of work that lies ahead — but also proud of what is already being done, and the successes of the past.

He pays tribute to the many achievements and work done by the past KKB committees and volunteers, since the group’s inception 40 years ago, and the great work being done today by the volunteers.

“All of this has helped Kilkenny win many Tidy Town awards and most recently our fifth IBAL award,” he says.
Mr Boyd is also hoping to welcome in new members, and young people who may also be eager to maintain the beauty of their home areas. There is a growing awareness of environmental issues among younger generations —indeed, one of the most recognisable faces of climate activism for many is probably teenager Greta Thunberg.

“So our role has always been to help protect and maintain a clean environment, and access to it for all the people of Kilkenny.

Young people have a big part to play in that. But where it happens really is on your own street, your own garden, in your own stream and your own environment. It would be great to see younger people becoming involved. They do through the Green Schools.

“We have a lot of nature engagement programmes and we are getting younger people involved. For example, we’ve an invasive species management campaign and we are all over the rivers every summer. That’s great fun as well — there is a great social aspect to it. We also have a Citizen Science programme on the rivers, and that’s attractive to younger people.”

TREE PLANTING
In addition to the above projects there are multiple initiatives in relation to trees, which have taken place or are at a stage where they will soon get under way.

Earlier in the year, they ran an ‘oak tree planting challenge’. KKB sourced young trees from a local supplier who grows oak trees from native acorns and put out a challenge on social media to see how many people could plant in a fortnight. They got 146 two-year-old oak trees planted around the city and environs.
Another example is the 8,000 trees and biodiversity challenge.

“We are looking to plant 8,000 trees or hedgerow plants in one calendar year, every year in Kilkenny,” says Mr Boyd.

“That plan is part of a bigger plan — the Kilkenny Tree Cover masterplan — which is a collaboration between ourselves, the County Council, and the tree providers/partners.
They will continue to actively look for landowners — farmers, sports clubs, schools, community groups or others — who might have an interest in becoming part of the challenge.

They can get involved and be able to say ‘we planted 100 trees’ or whatever number they can manage.

“Hedgerow is kind of the smallest viable habitat you can create and it is hugely important habitat.”
KKB has also partnered with Kilkenny Forest School, working with local students who are going to plant more acorns.

The new Biodiversity champion has been liaising with Minister of State Malcolm Noonan and his Department which are at the end of a first five-year pollinator plan.

“That will be restarting again this year, and Malcolm will be kicking it off. So we are hoping in Kilkenny we’ll get a huge response to that,” he says.

Before that, he can enjoy being crowned Biodiversity Champion for the coming year, and relish the task ahead.

“My job is to promote biodiversity as best I can for the year,” he says.
Best of luck!