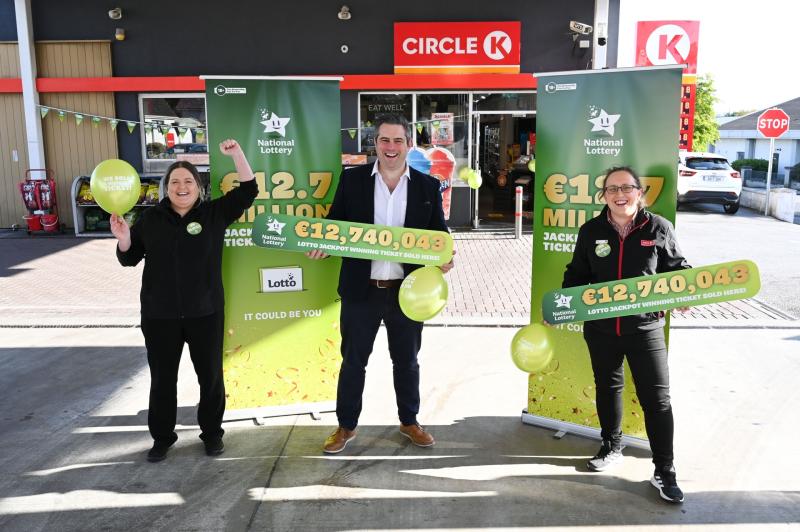 Speculation is rife in Kilkenny City as to who is the winner of the whopping €12.7 million jackpot last Wednesday.

The winner, who is understood to be based in Kilkenny City, made contact with The National Lottery on Thursday but has yet to claim their massive cash prize.

A spokesperson for the National Lottery confirmed that they have spoken to the winning ticket holder and told them to go and get legal and financial advice.

“It is a huge sum of money so we prepare that the person is as prepared as they can be,” he said.

The winner is expected the claim the jackpot, which is one of the largest in recent years, over the coming weeks.

The winning ticket, worth worth €12,740,043, was sold at the Waterford Road Circle K Service Station.

Manager, Marie Richards  said that the team were ‘delighted with the win’.

“It is a massive talking point and everyone is speculating on who the winner might be.

“It is great, all the positive banter - there has not  been a mention of Covid since it was announced that the winning ticket was sold here,” she said.

The winning Normal Play ticket was sold on the day of the draw.

The win is the 12th highest Lotto jackpot won since the game’s inception in 1988. While this is the second Lotto jackpot win this year, in 2020, a total of 19 brand new millionaires were made by the Lotto game in Ireland.

“I’d like to congratulate our customer who has won this week’s €12.7 million Lotto jackpot. As the biggest Lotto jackpot win in four years, it is a momentous occasion for us and a life changing moment for the winner.

“We are delighted for our colleagues at Circle K Waterford Road and congratulate them as well. I wish the winner well as they enter a new and exciting chapter in their life.”

Nearly 30 cent in every €1 spent on all National Lottery games goes back to good causes in the areas of sport, youth, health, welfare, education, arts, heritage, and the Irish Language.

In total more than €5.8 billion has been raised for Good Causes since the National Lottery was established 33 years ago. In 2020 alone, €254 million was raised for local Good Causes in communities across Ireland.