Acting the Mick in Kilkenny Castle with Mike Murphy 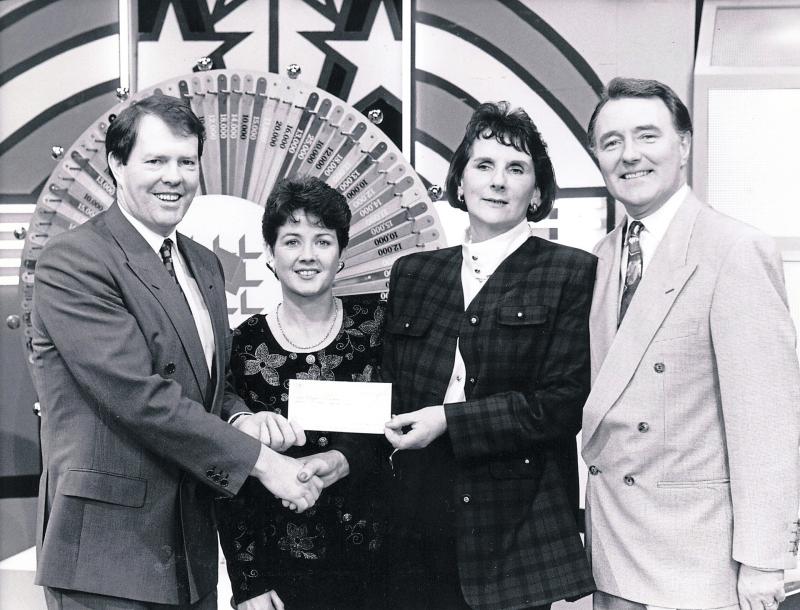 Who did I bump into sipping a coffee in the Castle Park? Mike Murphy of Winning Streak fame

And who did I bump into in the Castle Park recently, sitting on a bench with his wife Annie, sipping a coffee?
None other than the one and only Mike Murphy of RTE fame. Mike Murphy of ‘The Live Mike’ fame. Mike Murphy of ‘Winning Streak’ fame. Mike Murphy of ‘Murphy’s Micro Quiz-M’ fame and Mike Murphy of ‘Murphy’s America’ and ‘Murphy’s Australia’ fame.
Above all, of course, Mike Murphy of Candid Camera fame, where he got his legendary colleague, Gay Byrne, to utter the now immortal words: ‘Do you know the meaning of the words: F*** off?’, in the hallowed grounds of Trinity College, on public television!
As I approached Mike I decided to try and do a Mike Murphy on Mike Murphy.
“Excuse me, Mike,” I said, “but you’re sitting in the cheap seats. Throw me a few Euros and I’ll get you a seat over by the flowers and the fountain.”
Mike Murphy laughed. “Who have I?” he asked. “Gerry Moran, formerly of Glendine Heights,” I replied. “Ah, Gerry,” Mike smiled. “You won’t believe this but we were just talking about you and wondering if you and your wife are still involved in the Design Centre?” And Mike raised his coffee which he’d just purchased in the Design Centre’s Food Hall across the road.
“Kathleen sold up a few years back,” I tell him. “Wise move,” Mike remarks. “Lucky move,” I say.
One of the last times I met Mike was in the RTE studios, when my brother and his family participated in ‘Murphy’s Micro Quiz-M’ (no luck, I’m afraid) and later when I did a slot about the famous Guggenheim Museum in Bilbao, once described as the ‘Building of the Century’, which I had just visited, on the Arts Show which Mike was presenting at the time.
Mike Murphy and I got to know each other through his ‘Morning Call Show’ on RTE radio (for which he received a Jacob’s Radio Award, the Oscars of Irish broadcasting) back in the early eighties.
For maybe a year, or two, I was a regular contributor to Mike’s show – sending him short, humorous, snippets about this and that, but mostly about things topical and political.
To this day I can still hear Mike’s voice announcing: “And now another observation from Gerry Moran, 30 Glendine Heights, Kilkenny.”
And whatever emphasis Mike placed on 30 Glendine Heights – my address got more prominence than my name. This I know because of an encounter on a train journey from Dublin to Kilkenny around that time.
I got chatting to the passenger in front of me who casually asked where I lived in Kilkenny. “Glendine heights,” I tell him. “By any chance,” he asked, “would you know of a fella who writes to Mike Murphy in the mornings and who lives in 30 Glendine Heights?”
I can’t believe I’m hearing this. “I know him well,” I said. “It’s me.”
I shared that little anecdote with Mike before leaving him and Annie to their coffees. So, that’s Mike Murphy and myself. Here’s one of those snippets of mine that he broadcast on ‘Morning Call’ all of 38 years ago!
COMBS
A comb is a piece of plastic with teeth. And legs! Combs walk. Black ones. Brown ones. Expensive. Cheap. It doesn’t matter. They all walk.
I could buy five combs tomorrow and I guarantee you that in five days’ time every one of them will have walked.
Our house is notorious for walking combs. Never, ever, can I find one when needed. I’m dashing to work, the hair is like a furze bush on my head, I need a comb badly. Can I find one? No. Every comb in the house has walked. I’m sick to the teeth of walking combs.
Where do all these combs go? Is there a comb commune where these pieces of plastic convene glad to escape the nitty, gritty, greasy world of scalps and oily, matted, mops of hair. Combs may not have scalps but maybe they have brains. Which might explain their walking habits and need to escape.
By the way, not all combs walk. Some run. Sprint in fact. New combs don’t hang around but are gone like a shot. Broken combs, on the other hand, just hang about and aren’t capable of dragging two hairs across your head.
Then there’s hairbrushes. Hairbrushes, you’ll be glad to know, don’t walk. Or run. Or sprint. Hairbrushes hide!