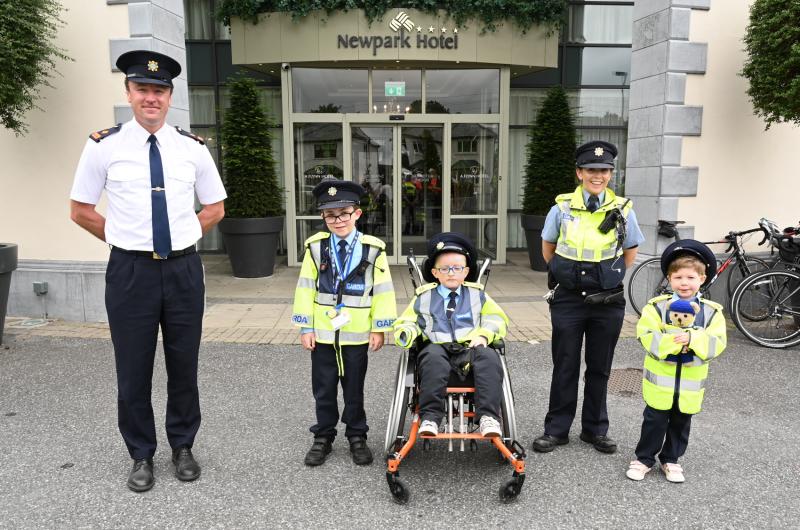 It was smiles all round when local little blue heroes welcomed Dublin gardaí to Kilkenny.
The convoy of cyclists arrived at the Newpark Hotel on Thursday afternoon and were greeted by three inspirational young people - Cormac Kennedy, Cathal Nolan and Amelia Mulhall. There was great fun as the brave youngsters met with the Gardaí who were on a cycle to Kilkenny to raise awareness and funds for Little Blue Heroes.
Four-year-old Amelia Nolan from Ballyfoyle, 10-year-old Cathal Nolan from Newmarket and nine-year-old Cormac Kennedy from Bagenalstown all looked resplendent in their new uniforms and were at ease chatting to their garda colleagues.
Superintendent Derek Hughes also attended the event and was delighted to meet with his honourary recruits and delegated the running of proceedings to his most trusted Sergeant, Edward Bear.
In a rare quote, Ted said;
“There’s no pulling the wool over your eyes, these are clearly some of our finest recruits,” he said.
The popular sergeant, who has become a social media sensation, refused to comment on why he hadn’t cycled but a source close to the bear suggested said it would have ‘knocked the stuffing out of him’.
The children were joined by their proud families who enjoyed watching the recruits in action.
Little Blue Heroes Foundation is a not-for-profit charity operated entirely by volunteers made up of Garda members/staff, retired Garda members, their families, friends and civic minded people from communities.
The Foundation aims to help families in need from local communities in Ireland who have children undergoing long-term medical treatment for serious illness.