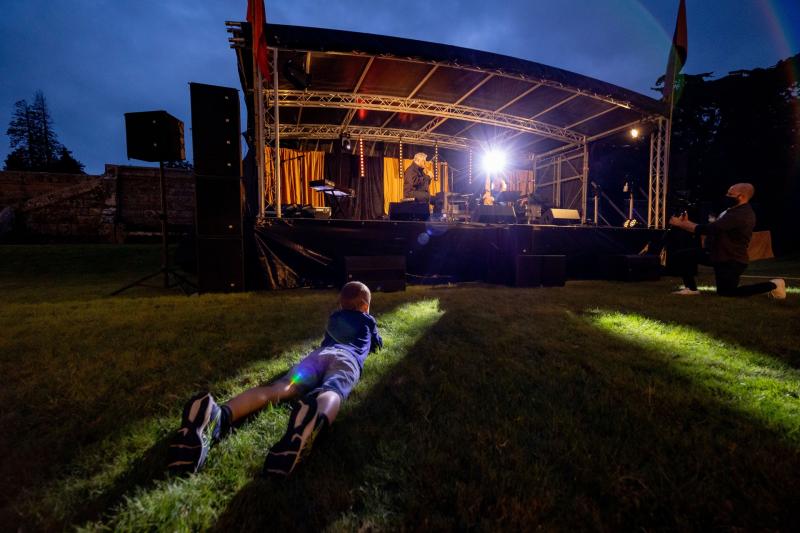 Concert-goers descended on the beautiful grounds of Woodstock Gardens on Friday evening for opening night of the concert series.

Guests were treated to a stunning night of classical and jazz music with Mark Anthony McGrath and Bobbie Carey opening the evening with a Joni Mitchell tribute, Hot4Jazz, Amber and The Bear, Siobhán Armstrong accompanied by Ronan Browne.
Joined by his parents Paddy and Maura D Rafter, violinist Patrick Rafter closed the evening. KCLR’s Martin Bridgeman was on MC duty for the weekend.

Astounding
“There was such a magical atmosphere at all of the concerts and it was an absolute joy to witness the return of live music to Kilkenny,” said Mary Butler, Kilkenny Arts Officer. “The quality of the performances and music was astounding across all three concerts.”

On Saturday evening, crowds flocked to Ballykeeffe Amphitheatre for the venue’s 20th and final concert of 2021. The atmosphere was electric.

There was a stunning opening set from Gwen Blanch, Davey Long aired tracks from his forthcoming album, local act The Screws played their first gig, Oh Bryan and The Wha rocked the amphitheatre.

A phenomenal close to the night with RSAG, aka Jeremy Hickey, belting out tracks from his most recent album Chroma.
Happy Valley Coffee and Breagagh Valley provided refreshments, delicious treats made locally and mouth-watering burgers.

Cathaoirleach of Kilkenny County Council Fidelis Doherty said the funding provided by the Government under the Local Live Public Performance Scheme allowed the council to manage and support performances by local performers, technical teams and event organisers, bringing high quality performances to the public in a safe manner.

“September Sounds, celebrating the exceptional talents of local performers, was a huge success over the weekend,” she said.

“This success was due to the hard work of our event organisers in association with the Watergate Theatre. I congratulate them on a job well done and thank everyone who came out and supported the events. No doubt all those who took part were delighted to be back performing on stage connecting with their audiences.”

On Sunday evening, due to weather conditions, September Sounds made the move from an outdoor concert at Butler Gallery to Watergate Theatre. A magnificent close to a wonderful weekend of local live music.
Emerging artists opening the evening included Gary O’Neill, Ali Comerford, Kairen Caine, Elise and The Wandering Souls warmed up the crowd for headliners.

Watergate Theatre director Joanna Cunningham said the theatre was proud to be involved in a hugely successful weekend of events, during which over 100 Kilkenny musicians and live performance professionals were employed. She said the atmosphere was electric at the three venues despite the rain on Sunday which moved proceedings indoors.

“The air of busy-ness and normality was refreshing and exhilarating,” she said. “There are too many people to name but my own take away from the weekend is a sense of celebration of the wonderful, professional, positive, solution-focussed and talented event managers, venue staff, ushers, musicians, technicians, crew, marketeers, photographers, food vendors, MCs, administrators and of course audience members! A huge thank you to everyone.”

September Sounds was funded by the Department of Tourism, Culture, Arts, Gaeltacht, Sport and Media and is being delivered locally by Kilkenny County Council’s Arts Office and the Watergate Theatre.

The local live performance scheme will host the fourth and final concert as part of Kilkenny Day on Sunday, October 10 in the grounds of Kilkenny Castle Park.