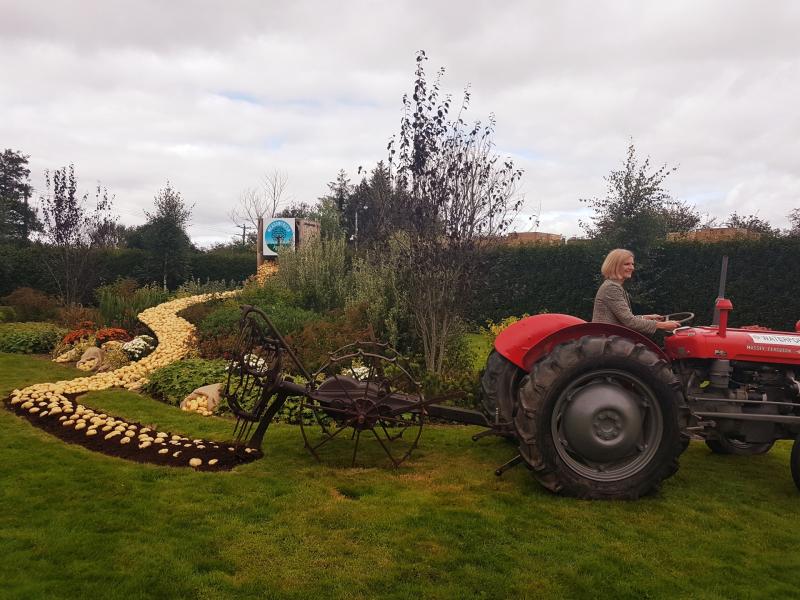 Ireland has been long associated with the potato as our staple crop so it may come as a surprise to many that over 70,000 tonnes of potatoes are imported into Ireland every year. O’Shea Farms have been addressing this strange anomaly over the last number of years.

They have successfully introduced the production of salad potatoes, which have enjoyed growing popularity on supermarket shelves in recent years.

The project has been running over a number of years but 2021 has been the first year where they can supply 100% Irish salad potatoes to their customers.

Now they have turned their hand to chipping potatoes. Traditionally Irish chip shops have used imported potatoes to make fresh chips.
Bord Bia, Teagasc, the IFA and the Department of Agriculture, Food and the Marine joined forces to create the Potato Development Group, with a mandate to increase the volume of home-grown potatoes sold in Irish chip shops.

Homegrown
In 2019, at the beginning of a project to increase consumption of homegrown potatoes, Bord Bia undertook consumer and trade research to understand both the Irish consumer and independent chip shop owner’s perspective.

The research revealed that over 66% of Irish consumers (two in three) incorrectly assume that the potatoes used to make the majority of chipper chips come from Ireland.
Approximately three in four people are likely to support a chipper that sources locally grown potatoes, while 70% would consider it useful to know the country of origin of the potatoes used in their usual chipper through signage or recognised marks.

Progress has stepped up this year with the launch of the Irish Chipping Potato Pilot Project, which sees O’Shea Farms managing plans with their growing partners for the Markie variety of potato which is ideally suited for making fresh chips.

Meadowfresh Foods work in partnership with them to fry test every crop of potatoes to ensure it fries to perfection before marketing them to distributors and chip shops. Plans are also afoot to sell them to restaurants and hospitality outlets, and eventually the retail industry.

The launch was attended by Minister of State at the Dept of Agriculture, Pippa Hackett and representatives of the Potato Development Group.

The O’Shea family have been farming on the banks of the River Suir at Ardclone, Piltown since the early 1800s.
Today the sixth generation of the family farm 1,500 acres, with a mixed enterprise of carrots, potatoes, cereals and a herd of spring calving dairy cows.

Current directors are James and TJ O’Shea, who both take a hands-on approach to the business. Both of their fathers, Dick and Seamus, are still involved in the business, along with several of their brothers and cousins.

Pictures by Vicky Comerford - click 'Next>' button for next pic!

O’Shea Farms employ 90 local people and a further 30 to 40 seasonal workers and students assist during busy times. Local hauliers and contractors also help with field work and transportation. Over 40 local potato and carrot growers send their produce to O’Shea Farms for processing and packaging. They work in partnership with Iverk Produce who market their goods to wholesalers and retailers.
They also work in partnership with Meadowfresh Foods in Tallow, Co Waterford, who supply freshly prepared produce for the catering, manufacturing and hospitality industries. They produce over 150 lines of prepared potatoes, fruits and vegetables for daily distribution around the South-East.
These partnerships ensure there is full control over production, grading, storage, packing and delivery - 100% traceability from field to fork.

Wastewater produced in the vegetable washing process is treated by a 13-acre reed bed wastewater management system. Reed beds are a natural, environmentally friendly, ecologically sustainable solution for the treatment of wastewater.
Recycling and reusing has come to the fore in recent years, in line with national policies. Crates and pallets can be used many times before reaching the recycling stage. Cardboard and plastic waste is segregated and recycled.

Bank closures 'a kick in the teeth' for rural Kilkenny