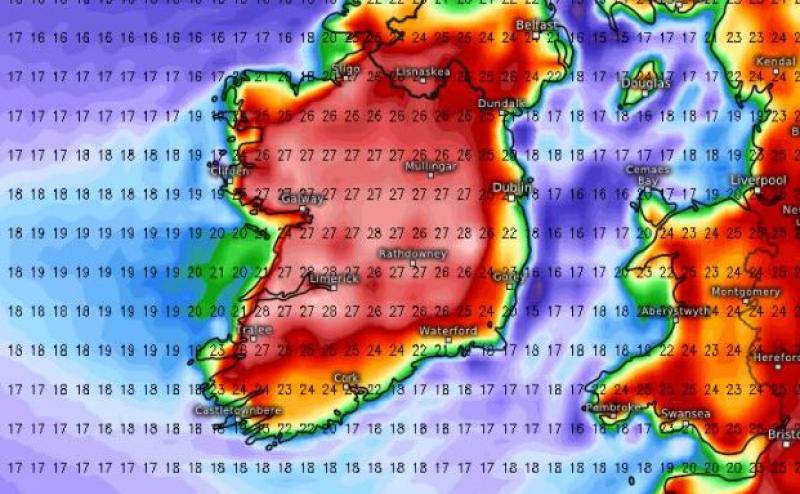 European Centre for Medium-Range Weather Forecasts Map For This Weekend

High pressure isn’t confined to the weather maps this week as bookmakers are feeling the heat of Irish punters backing a temperature record being smashed this weekend as Irish sun worshippers see odds halved to 5/1 From 10/1. Kilkenny may lose its crown as the place in Ireland with the hottest ever recorded temperature as the entire nations faces scorching temperatures in coming days.

The highest currently recognised air temperature (33.3 °C) ever recorded in the Republic of Ireland, was logged at Kilkenny Castle in 1887. But with Met Éireann predicting extremely high temperatures, this record may soon be toppled.

Met Éireann has issued a high temperature advisory warning for the coming days amid predictions that Ireland will see its hottest days of the year so far at the weekend or early next week.

Kilkenny's long-standing record is under threat according to the latest betting, which had rated the chances of a new high being clocked this weekend at a remote 10/1 just 24 hours ago.

A new temperature record across the Irish sea is also hot with punters, who have backed the UK record of 38.7°C clocked in Cambridge in 2019 to be broken before the weekend is out.

Lawrence Lyons, spokesperson for Boyle Sports said: “With a mini heatwave arriving on Irish shores it’s no surprise to see a few hopeful punters trying to cash in, especially given the record-breaking highs that are being tipped in the UK. A growing number will be sweating it out in Ireland this weekend after investing in a new record and even after cutting it into 5/1 from 10/1, the interest is showing no signs of drying up yet.”