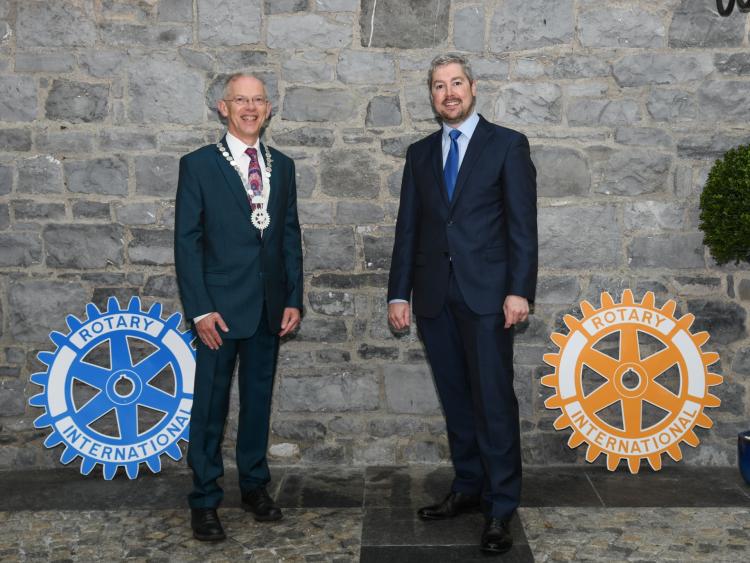 The new President of Rotary Kilkenny is Ian Coulter.

Leadership, and the chain of office, was passed to Mr Coulter at the club’s recent Zoom meeting.

Coming at the end of a hugely successful year for the club, the new President said taking the position was an honour.
“This past year has been a huge success for Rotary Kilkenny under the leadership, direction and vision of outgoing President Jason Dempsey,” he said.

“Jason built a special relationship with so many others and brought them into the Rotary fold,” he added.  “The army personnel at James Stephen’s Barracks, who were so helpful in both our Bikes to Africa Project and in the Schoolbooks for Lebanon endeavour; with the Local Authority, with other Rotary clubs who were inspired by your actions, with government departments, who saw the environmental advantages of the project and enabled its expansion.”
Among his aims for the year, Ian said he hopes to implement an additional youth project that compliments the Youth Leadership Award programme.

In keeping with Rotary International President Holgar Knaack’s theme ‘Rotary Opens Opportunities,’ he hopes to ensure that Rotary Kilkenny will enable members and the community to lead a richer, more meaningful life.
Jason Dempsey reflected that his year as President “has been very much one of ups and downs”.
“But we’ve stuck together,” he said. “We have done some good.”

He thanked the council members of Kilkenny Rotary for their work, saying “the running of this club is very much a team sport”.
Ian came to Kilkenny in 1979 to work with the National Rehabilitation Board. He initially thought that he might stay for two years – that was 41 years ago!

In December last Ian retired from his role at the Citizens Information Board. In 1985, he joined the Board of Kilkenny Arts Week, which he went on to chair in 1992 and in 1997.
He has been involved with St Canice’s Credit Union for 26 years. In 2000 he was ordained as a priest in the Church of Ireland and serves in a voluntary capacity and is about to take on a parish responsibility in Tullamore.
He is a member of the Board of the Good Shepherd Centre, Ossory Youth, SOS Kilkenny and the Butler Gallery and is a member of the Council of Kilkenny Archaeological Society.
Ian has been a member of Kilkenny Rotary club since 2002. He is married to Daphne and they have two children, Rian and Ailbhe.