Bravo! Fitness centre in Kilkenny raises funds for All Paul Together 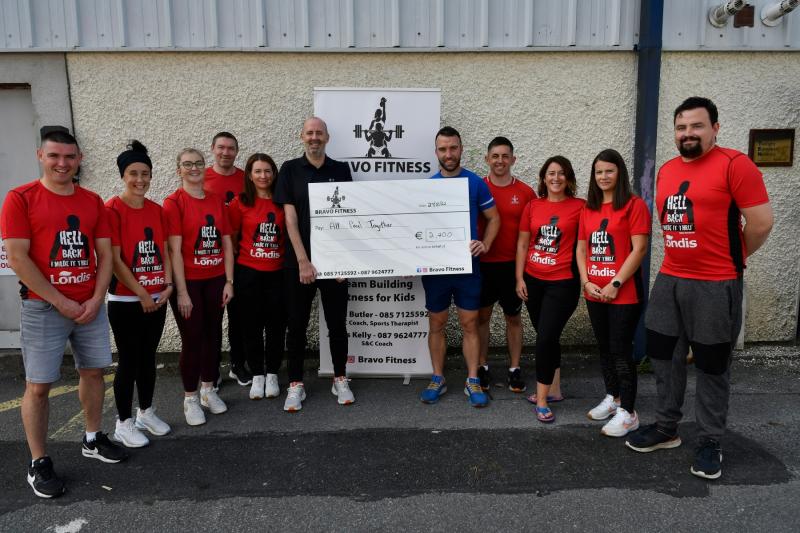 Staff and members of Bravo Fitness in Kilkenny City have raised €2,400 for All Paul Together, a fundraising community set up on behalf of Paul Smith to raise money for his fight against Motor Neurone Disease (MND).

Members of the fitness centre raised the funds by getting sponsorship to compete in a ‘Hell and Back’ fitness challenge that pushed them to new heights physically.

Co-owner of Bravo Fitness, James Kelly, stated that the fundraiser was the gym’s first social outing and that it made sense to ‘bring fitness into it and do some good along the way’.

“It was great because not only were we able to raise money for All Paul Together but we also got to challenge ourselves,” Kelly said.

Paul Smith, who attended Bravo Fitness for the cheque presentation, expressed his thanks and gratitude for the continued support from fundraisers across Kilkenny and further afield.

“It’s really important to keep raising awareness about MND and every little helps in that regard,” he said.

One of the main objectives of the All Paul Together community is to raise financial support to cover Paul’s ongoing medical, transportation and accommodation costs.

Paul is currently undergoing an MND treatment programme in the United States and is regularly flying to and from Ireland, which can be challenging.

Another key objective for Paul is partnering with the Atlantic Technological University to fund and lead research related to lifestyle factors that impact MND sufferers.

The All Paul Together community is also in the process of developing an online platform that provides evidence-based resources and information to help MND sufferers in their day-to-day lives.

Here in Kilkenny, another big ‘Dribble for MND’ fundraiser is planned before the end of the year but further details have yet to be announced.

There is currently no cure for MND but for Paul and those who support him, making MND more treatable is a massive goal to strive for.

For more information on All Paul Together, or if you wish to donate directly, visit: ‘allpaultogether.com’.

The team at Bravo Fitness (@bravofitness20 on Instagram) are also planning more fundraisers for worthy causes in the future and are always looking for new members.