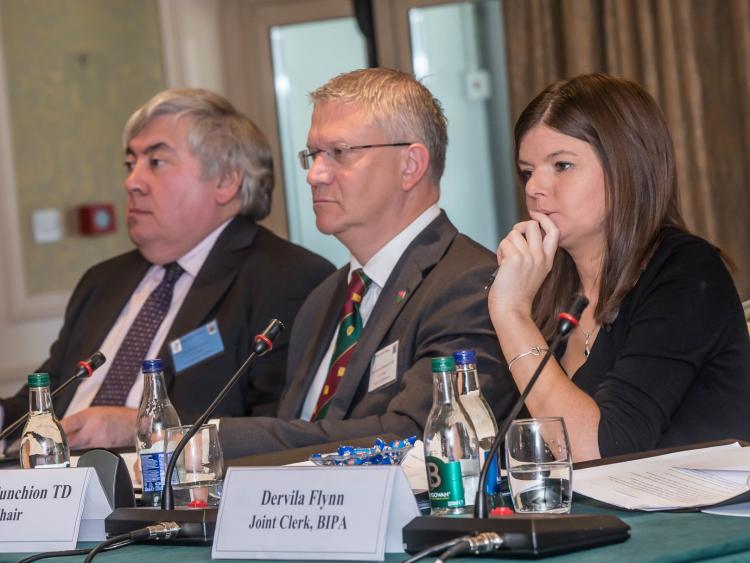 Local TDs were to the fore this morning as the 54th plenary session of the British Irish Parliamentary Assembly (BIPA) got under way at Kilkenny City's Newpark Hotel.

As co-chair of BIPA, Sinn Fein's Kathleen Funchion welcomed the delegates to the event and to the Marble City, which she said was a fitting destination to host proceedings.

The opening speaker was another local TD, Minister of State John Paul Phelan. The issue of Brexit dominated the day's discussions, with Deputy Phelan noting that Ireland's strategy would be to minimise the negative effects of Brexit here, for Irish-UK relations, and for the EU, of which Ireland 'will continue to be a committed member'.

"Sadly, whether we like it or not, for Ireland the horizon is now clouded by the prospect of our closest partner leaving the EU," he said.

"Our ambition at this stage is to make the best of what is, from our perspective, an unfortunate situation. We accept that the UK has made a decision to leave and we must cope with its effects."

Deputy Phelan took some questions from the floor, following which the British Ambassador, HE Robin Barnett, gave an update on the British position. European Ombudsman Emily O' Reilly then addressed the plenary on her office’s perspective on Brexit and the EU.

A number of other speakers are planned for this afternoon's events, while those in attendance will be hosted at a reception at City Hall later on, hosted by Mayor of Kilkenny Michael Doyle. A historical talk and walk through Kilkenny Castle will take place this evening, followed by dinner.

Further sessions are planned for tomorrow in the Newpark Hotel.