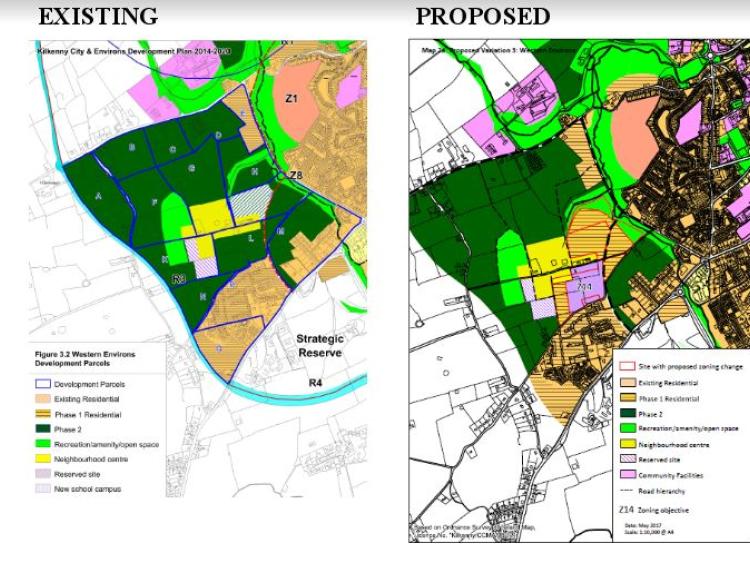 A variation is to be made to the Kilkenny City and Environs Development Plan to allow for more intensive residential development, along with two new schools, in the west of the city.

It follows recent confirmation of funding under the Local Infrastructure Housing Activation Fund (LIHAF), for road infrastructure along key parcels of land in that part of the city. With this funding, Kilkenny County Council has said there is potential for 800 houses initially, with a total of 3,000 units ultimately envisioned through phased development. A new ETB campus will include two schools also.

While the CPO is in place, the design must be updated to reflect the new situation, and contract documents must also be ‘refreshed’ to prepare for tender.

The change to phasing allows for the benefits of the LIHAF funding to be maximised. Infrastructure funded will include a new road from the Callan Road to the Kilmanagh Road, a park along the Breagagh River at Circular Road, and an upgrade of the Kilmanagh Road.

The new phasing allows for an additional 10 hectares of development land in the first phase, with fewer constraints, and the houses are to be placed closer to the new park.  The school site has been relocated, and its area is to be increased from 3.8 hectares to 4ha.

This allows the housing and school lands to use the same infrastructure, as well as the possibility of them being developed simultaneously. It will not affect the existing phase one lands, other than adding the 10ha.

The KCETB campus development will include two schools: a new multi-belief co-educational community college to cater for the growing demand for school places in the city, and a Gaelcholáiste to cater for families who wish to have their children educated through Irish.

At Monday’s meeting of Kilkenny County Council, senior planner Denis Malone said it was hoped to begin the tender process in the fourth quarter of this year, with a view to construction beginning in the first quarter of 2018. The variation was formally proposed by Cllr Peter ‘Chap’ Cleere, and received support from the other members.

"This is a really important and exciting development for the ETB and for the people of Kilkenny City," said Cllr Cleere, who is also the chairman of the KCETB.

"Our new campus will include two modern state of the art schools offering the very best environment for high quality teaching and learning. The schools will provide a wide range of subject options, catering for all students’ interests and abilities, respecting the cultural and religious backgrounds of all families, and educating their children together in a caring atmosphere that encourages them to reach their full potential.”