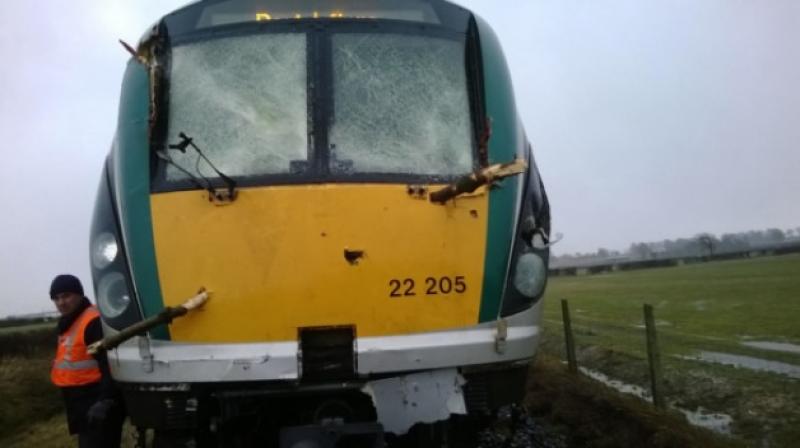 A train driver had a narrow escape when a tree trunk pierced through the front of the train as it was travelling at high speed missing the driver by inches.

A train driver had a narrow escape when a tree trunk pierced through the front of the train as it was travelling at high speed missing the driver by inches.

Miraculously no-one was injured when the passenger train, travelling at 80 miles per hour collided with the tree which had fallen on the tracks during Storm Darwin.

Leo Howard, who is from Slieverue and has been driving trains with Irish Rail for over 20 years said that he had never encountered weather like that seen last Wednesday.

“I was driving the train and was after passing Gowran and I came around a bend and there was a tree across the line and I applied the emergency brakes and made an emergency call. I ploughed into the tree - I had no choice but thankfully the train stayed on the tracks and none of the passengers were injured. It was really terrifying, I got an awful shock. We get great training from Irish Rail and while nothing can prepare you for this it goes a long way,” he said.

Frances Hogan was travelling on the train last Wednesday during Storm Darwin, which ravaged the city and county.

“We were travelling along and were around three miles from Kilkenny when next thing all I heard was a big bang and then a big branch flew past the window. We were at a standstill for almost an hour. An inspector came and after a while the driver drove very slowly back into Kilkenny. He was marvellous. It must have been very difficult as you couldn’t see through the windscreen probably. When it happened it was very stormy, it was at the height of it,” she added.

A spokesman for Irish Rail confirmed that an incident had taken place on the 1.15pm train from Dublin to Waterford last Wednesday.