Honouring a wise and humble man 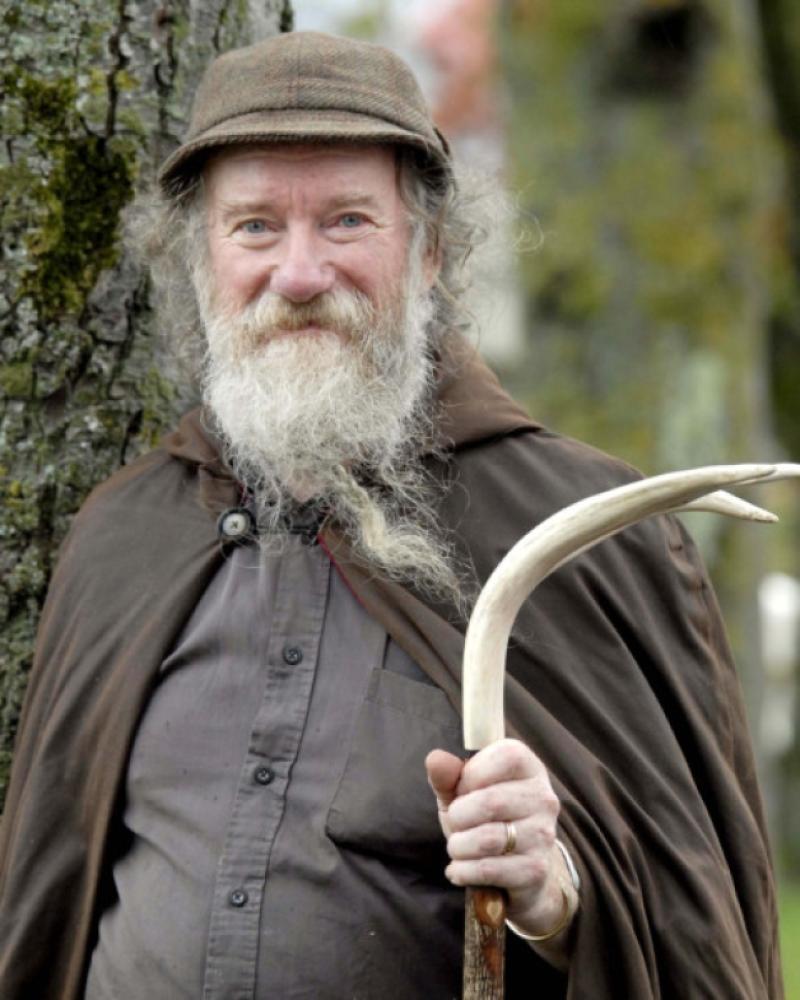 The sun shone down as the beating of the drum penetrated the still air around the Old Rectory at ThreeCastles for the pagan passing ceremony of Howard Campbell.

The retired psychiatrist, father of seven and husband to Eimear and Dorothy (who died in 1996) was a person of many dimensions and this was reflected in his druidic ceremony, which was a celebration of his life and was held in the grove in the front of his home.

Death is for many a time more filled with grief than joy, but in death as in life Howard Campbell in a gentle but determined way, showed those who had the joy of knowing him that death itself is as natural as life. In breaking with tradition there were few tears as friends and family gathered on Tuesday morning to celebrate a humble sage who shared his wisdom with humour in a modest way.

Howard’s body was waked at home and on Tuesday morning he was brought from the house in a wicker coffin, with a simple wreath of wild flowers from the garden, made by his daughters Lizy and Caoilfhionn. The procession following a lone drummer weaved it’s way down into the grove where people had gathered.

In traditional druidic fashion guests were welcomed and the spirits of the place were called. People were then asked to take three breaths and focus on the earth, the sky and the sea and then there was a call for peace followed by the Druid’s Prayer. The circle was then cast and consecrated by water and fire by some of the druids present .

The main part of the ceremony consisted of poems, most of which were written and chosen by Howard himself and a series of blessings. Those present were then invited to offer their own blessings.

His wife, Eimear in her eulogy remarked that the only regret that Howard had in life was that he did not get involved in the arts earlier in his life. He was an active member of the Tenant Writers Group and published two books - Darkness Shades so Light Can Be and On the Trail of Love in recent weeks.

In the bright sunshine, there was an air of serenity as blessings were bestowed on a much-loved friend, husband, father and brother.

The group then walked the short distance past the ancient Norman tower where druidic ceremonies are held and into an old graveyard which is adjacent to the Campbell family home.

Colourful bunting, flags and stunning works of visual art were displayed along the path and people gathered in the graveyard waiting for the procession to arrive.

The sweet sound of birdsong and the sun-drenched sky provided an apt backdrop to Howard Campbell’s final farewell. A psalm and prayer were recited at the graveside and there was chanting. Eimear then spoke giving Howard the last word as she read out his poem - Aristotle. As his coffin was lowered there was soulful music offering soothing consolation to those who will miss greatly a man who taught so much to so many in such a loving and gentle way.

Howard was born in 1945 in Wales of a Scottish mother and an Irish father and has two brothers - David and John. He was raised in a number of towns in the North of England and studied medicine at Manchester University. From childhood he had a keen interest in nature especially birds and insects and was interviewed on BBC radio about hover flies and in school was known as ‘Hoverfly Howard’.

While in university Howard met his first wife Dorothy and they had five children - Richard, James, William, Thomas and Lizy. Howard worked as a GP in Scotland for 17 years and when he was in his mid-forties he studied psychiatry and came to Kilkenny in 1994 as a consultant to set up the Child and Family Consultation Service. He spoke out often against the HSE and how it operated and featured in a front page article in this newspaper in January 2007 ‘Doctor slams youth mental health services’. After his first wife’s Dorothy’s death Howard and Eimear met and have two children - . Ruadhán and Caoilfhionn.

At the age of 61 he retired and enjoyed time in nature and with his family and friends. He lived with cancer and accepted the diagnosis and researched all treatments and adopted a mesolithic diet which included herbs, wild foods, seeds, nuts and raw and cooked food. In the final weeks of his life there was laughter, humour and gratitude in abundance as Howard embraced his death as he did his life with calm and grace.

Howard Campbell passed at home in the Old Rectory in ThreeCastles on April 9.

In the words of his daughter Lizy - ‘Be free, soar high, sing sweet’.