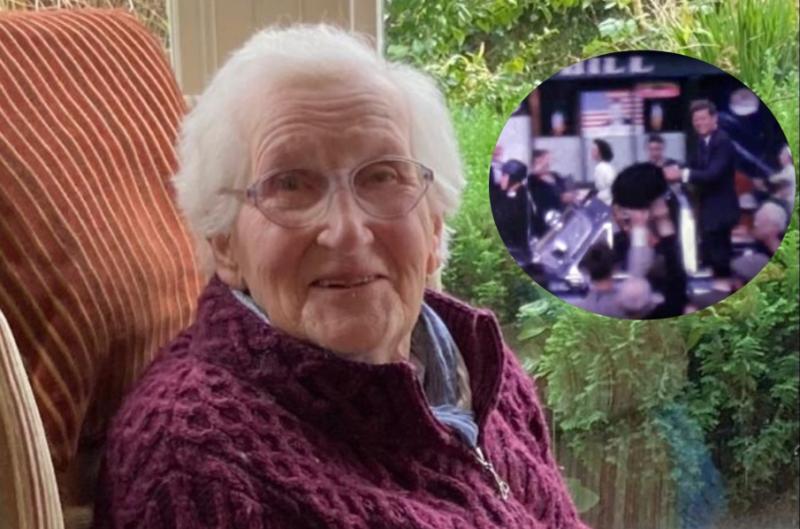 Peggy Walsh, featuring a still from her JFK footage

She will now present her 20-minute movie for a public premiere at the opening of the 2021 Kennedy Summer School.

The previously unseen footage of John F Kennedy’s visit to Ireland has been rediscovered after almost five decades.

Fortunately, Peggy was a keen photographer and videographer and back in the day made lots of short movies capturing the most important events of the day in New Ross including the visit of President Kennedy to the town, the trip of the local children’s choir to the US to perform on the Ed Sullivan Show in 1963 and many others.

Her daughter, Ann Larkin, recently discovered the Super 8 footage after getting it digitally converted. The film was digitised by another New Ross resident, Paddy Breen.

Peggy Walsh and Ann Larkin are donating the film to New Ross Library’s Kennedy Book and Research Archive, an offshoot of the annual Kennedy Summer School that was launched in 2017, on the 100th anniversary of President Kennedy’s birth.

The footage will be screened for the first time outdoors, at New Ross Library Park, on Thursday, September 2, at 5.30 pm, as part of this year’s Kennedy Summer School.

21 colossal and creative cat sculptures to be placed around Kilkenny