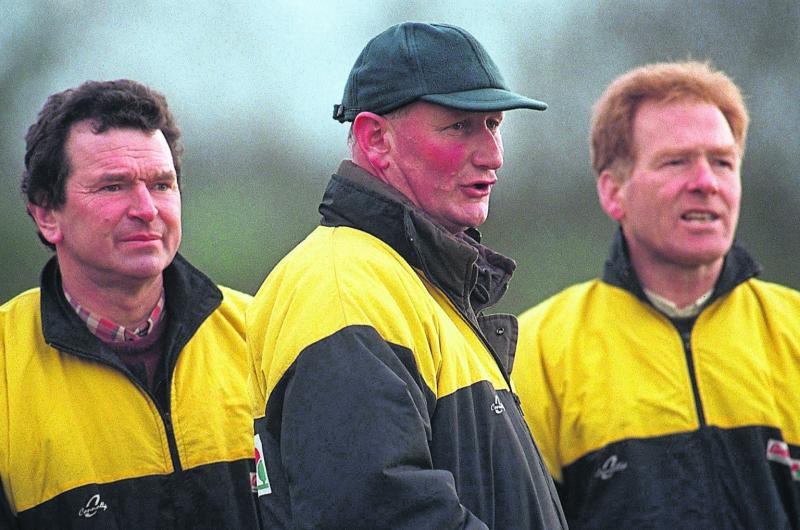 The Cody era began in the winter of 1998 - but it almost didn’t happen.

The Cats, who had been beaten in the All-Ireland final by Offaly, were rocked at the resignation of manager Kevin Fennelly. Without their man at the helm, Kilkenny County Board sprang into action and compiled a list of potential candidates - a list which, at the start, didn’t contain one Mr B Cody…

Here’s how the Kilkenny People covered the scenario as it unfolded and made page one news across October and November that year.

HITCH AS FENNELLY IS NOT APPOINTED
Kilkenny People - October 16, 1998

A last minute hitch has left Kilkenny without a senior hurling manager.

Incumbent Kevin Fennelly was due to be installed in office for a second term, but it didn’t happen. But no one is able to explain why, because all parties involved are singing dumb.

The ‘People has learned that there was an 11th hour call from Mr Fennelly asking that the Co Board hold off on making the appointment. Via well connected sources, the People learned Mr Fennelly won’t take the job on the same terms as last year. He wants more scope and full control of matters relating to the senior panel.

There is no clear favourite in the race to succeed Kevin Fennelly as manager of the Kilkenny senior hurling team.

Indeed, the main activity this week was among those declaring no interest in taking the job.

A lot of possible candidates have been mentioned, including George Leahy, Noel Skehan, Diarmuid Healy and Paddy Johnston.

But no one has uttered the magic words “Yes, I am interested.”

Clubs have been asked to make nominations for the job. When the list of candidates has been finalised, a special sub-committee of the County Board will adjudicate on the names and put one before the Co Committee.

Until the new manager has been appointed, team affairs will be looked after by County Board chairman John Healy, vice-chairman Ned Quinn and secretary Pat Dunphy.

The Kilkenny hurling succession stakes looks like coming down to a head-to-head between two main contenders.

All will be revealed on Monday night when the manager to succeed Kevin Fennelly will be announced.

As we went to press there were still six candidates in the running. However, Brian Cody (James Stephens) and late entrant into the race Nicky Cashin (Clara) were emerging as the strongest candidates.

Cody and Cashin, along with George Leahy (James Stephens), Richard Power (Carrickshock) and Larry O’Neill (Erin’s Own) have already been interviewed for the job.

The name of one candidate will be put up for ratification at Monday’s meeting of the County Board.

The new manager will serve a two-year term. He also has the right to decide whether he wants a three or five-man selection committee.

GIVE THE GAMES BACK TO THE PLAYERS, NEW BOSS PLEADS
Kilkenny People, November 20, 1998

With an earnest appeal to everyone to put the players back centre stage and make them the most important people in the game again, new Kilkenny hurling boss Brian Cody swept into office this week.

The 44-year-old former All-Star became the county’s third manager in two years when he took over from Kevin Fennelly, who resigned after the All-Ireland defeat by Offaly.

“I think it is time to give the games, and the credit for playing them, back to the players,” Mr Cody told the People when he suggested he would like to be a low-profile manager.

“In some cases the profile of the manager has gone way overboard,” the city school teacher insisted. “I played in the Seventies when Fr Maher was very much a team manager, but the emphasis wasn’t on him - it was on the games and players.”

He said he realised things had changed, and dramatically. There were far more media outlets, with the advent of local radio, new newspapers and magazines and different television channels.

But that didn’t alter the fundamental fact that it was the players who provided the entertainment.

“Without the players there would be no games and no managers either,” Mr Cody added.

Mr Cody got a quick lesson in the demands the media would place on him. By the time we spoke as arranged early on Tuesday morning he had already given six interviews about his new role. And his appointment was only ratified by the Co Board late on Monday night!

He said he was ‘proud’ to take on the job as Kilkenny boss. He had told officials of his own club, James Stephens, that he wouldn’t have any involvement with their senior team next year before Kevin Fennelly decided to step down.

“Up to that the Kilkenny job had not crossed my mind,” the All-Star of 1975 and 1982 revealed. “I was genuinely surprised by Kevin’s decision.”

Now that he had become manager, he had a clear view of where he was going. He would pick two selectors to work with him, and a trainer to provide ‘expertise’ in physical fitness.

“I would be optimistic about the prospects for Kilkenny,” the All-Ireland winning captain of 1982 insisted. “The fact we got to an All-Ireland final this year is neither here nor there.

“That might put additional pressure on us, but it shouldn’t really. Some supporters might think the next step is winning an All-Ireland. That is not the way things work.

“The All-Ireland is won by a team made up of good players working hard for each other, and with a ferocious spirit. I want Kilkenny to be that team.”

Brian Cody was potentially one of the greatest defenders the game has ever known, but a knee injury cut short his career mid-term.

As an under-age player he won All-Irelands with St Kieran’s College and Kilkenny, on the 13-a-side team with the school in 1971 and with the county in 1972.

He won an under-21 All-Ireland in 1975, when his predecessor in the job, Kevin Fennelly, was the captain.

The first steps into management

Manager Brian Cody and selectors Ger Henderson and Johnny Walsh named no less than nine new kids on the block when they announced the squad.

Although they may have had a look in the senior intercounty door on one or two occasions in the past, this will be a first as regards long-term involvement for up to nine players.

As well, the management team have given former All-Star John Power the chance to refloat his intercounty career.

“The panel is open ended,” Mr Cody was at pains to point out.

“If lads not named show good form with their clubs they can get in. If lads in the squad show a lack of commitment or anything, they will be shown the door.”