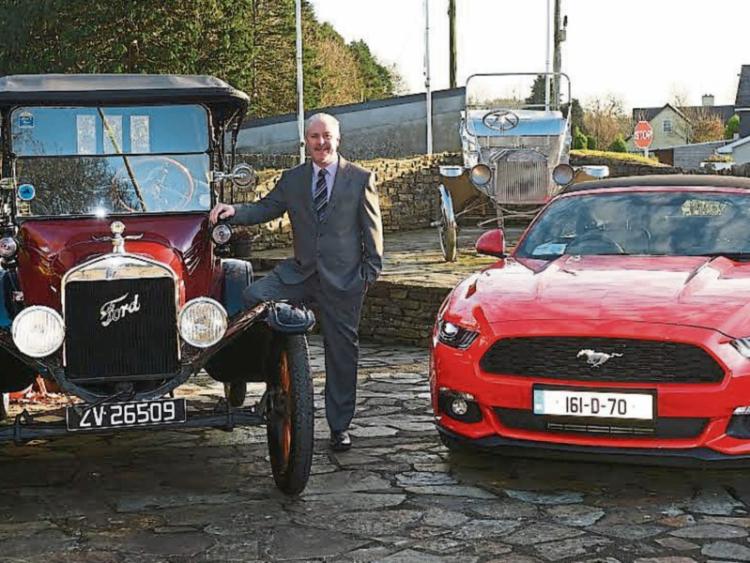 Shortly it will be exactly 100 years since Henry Ford established the Ford factory on the Marina in Cork City.

Ford Ireland plans to mark the centenary through a number of exciting initiatives.

The first was the launch of  an extensive and impactful new marketing campaign based around the company’s Irish centenary and encouraging consumers to think about the brand differently.

The campaign features the Irish-American actor Aidan Quinn in a range of Online video executions and radio, supported with press adverts, outdoor and other ambient displays, which will become more familiar to Irish consumers during the  year.

There are many activities, promotions and events planned throughout the year.

One of the highlights being a gala dinner  at Cork City Hall on April 21 to mark the actual centenary.

Ciarán McMahon, chairman and Managing Director of Ford Ireland, said Ford has a unique heritage in Ireland, not only through the company’s close family links with Cork but also through the Cork Ford factory and, of course, many decades of much-loved Ford cars and vans on Irish roads.

“ And we are still to the forefront in the automotive sector in Ireland with the widest network of dealers, providing employment, directly and indirectly, to some 1,000 people across the country,” he added.

“Ford vehicles were and still are a ubiquitous sight on the streets and roads of Ireland all through the 20th century and right up to the present day,” Mr. McMahon insisted.

“The brand’s constant popularity meant that almost every Irish person grew up with a Ford car in the family or had aunts, uncles and neighbours who drove a Ford.

“The factory is sadly no more, but Ford remains one of the best-selling brands in both the car and van market in Ireland,” he added.

“Several of our models including the Fiesta, Focus and Transit are segment leaders while the all new Mustang is in a class of its own.

“The company is also looking to the future as we plan for the next century of business in Ireland,” said the Ford Ireland chief.

Ford has the largest test fleet of autonomous driving vehicles in the world, he continued, and in 2017  will start testing autonomous vehicles across Europe.

“ The company is moving from traditional vehicle manufacture to being a smart mobility solutions provider as we tackle the global mobility challenges of the 21st century,” Mr McMahon said.

The Ford Motor Company was set up in Michigan by Henry Ford in 1903.

True to his roots, just 14 years later Henry opened the first purpose-built Ford factory to be located outside of North America at the Marina in Cork.

Henry’s father, William Ford, emigrated from Ballinascarty in Co. Cork (50km from Cork City) with his parents and siblings in 1847 during the Famine.

Henry was born in Michigan in 1863.  Growing up on the family farm, Henry developed a strong interest in mechanics.

At first he concentrated his efforts on making work easier for farmers, but he soon came to realise the potential of the motor car as a force for good for the development of societies across the globe.

Although he cannot be credited with inventing the motor car, Henry Ford was the man who brought motoring to the masses thanks to the affordable yet rugged vehicles he produced through his newly-invented production-line manufacturing technique – which has since been copied by practically every vehicle and machinery manufacturer across the globe.

‘Bringing it all back home’ – the Ford factory was established in Cork in 1917.

When it came time to expand the business to Europe, there is no doubt that Henry’s Cork roots played an important part in his decision to open a plant in Cork.

He said he hoped that the new Ford plant “would start Ireland along the road to industry”.

The setting up of the Ford plant in Cork was the first example of foreign direct investment in Ireland, many decades before the term was even coined.

The company that he legally established was entitled Henry Ford and Son Ltd. and that continues to be the legal name of Ford in Ireland to this day.

It is the only Ford entity in the world to include the full name of the company’s founder in its title.

Communist Russia was in the midst of a huge modernisation programme so tractors were the vehicles that were most urgently needed.

The Fordson tractor was the main product produced by the Cork plant, which in 1929 became the largest tractor factory in the world.

However, the factory also produced passenger models, including the iconic Model T.

Indeed, the last Model T ever produced by Ford anywhere in the world rolled off the Cork factory production line in December 1928.

In addition to the Model T, the Cork factory also produced all the other main Ford vehicles that were sold in Europe from the thirties  right up to the seventies and eighties,  including the Model A, Model BF and Model Y; Prefect; Anglia; Escort; Cortina; and Sierra.

With Ireland’s accession to the EEC in 1973, Ireland had to comply with new rules that lifted the previous restrictions on imports of fully built motor vehicles into the country.

This, combined with a depressed car market in the late 1970s and early 1980s meant that the plant became no longer viable and, regrettably, it closed its doors in 1984.

In the intervening years, Ford has continued to be a strong player on the automotive scene in Ireland.

The company has the widest network of dealers in the country with 52 dealerships.