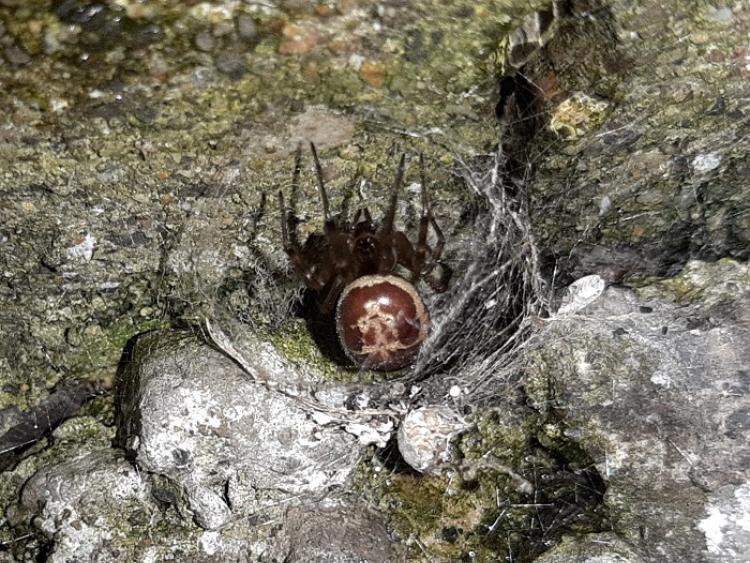 A team of scientists from NUI Galway and the University of Liege in Belgium have investigated the genetic and venom makeup of the Noble False widow spider, which is considered the most venomous spider in Ireland and the UK, and has been spreading worldwide over the past two decades.

Results show that the Noble false widow spider produces a range of toxins found in Black widow venom. Just as the majority of black widow bites are not serious, so far most of the recorded bites from false widows are mild. However, this new study demonstrates that the venom of the Noble false widow spider can potentially deliver a more toxic bite than previously thought. These findings will help medical professionals to recognised and treat symptoms related to false widow bites.

The Noble false widow spider Steatoda nobilis originates from the Canary Islands and Madeira but has now spread throughout Europe, North Africa, West Asia and parts of North and South America. In parts of Ireland and the UK, it is one of the most common species of spiders in and around urban habitats. Venomous bites are becoming more prevalent, with victims usually experiencing intense pain and swelling for a few days. In some cases, victims have developed small wounds at the bite site, malaise and persistent stiffness in limbs.

Scientists at NUI Galway and the University of Liege used cutting-edge genetic and protein-based methods to identify the toxins responsible for these symptoms. Out of a total of 140 toxins recovered, 111 were also found in their infamous cousins the “true” Black widows, including α-latrotoxins, the compounds known to disrupt the central nervous system of vertebrates, including humans.

Dr Michel Dugon, head of the NUI Galway Venom Systems Lab said: “We know very little about spider venom and the way toxins act on the nervous system of animals and humans. The False widow spider is a new addition to Irish ecosystems and it is here to stay. It is therefore important to learn about its ecology and the potential risks associated with its bite.”

John Dunbar, doctoral student in the Venom Systems and Proteomics Lab at NUI Galway and lead author of the study said: “Although our study shows that the venom of false widow spiders may be more potent than previously thought, it does not mean we need to fear them. In many parts of the world even “true” black widow bites rarely require medical attention. However, this new discovery will ultimately help medical professionals to diagnose and treat severe false widow bites.”