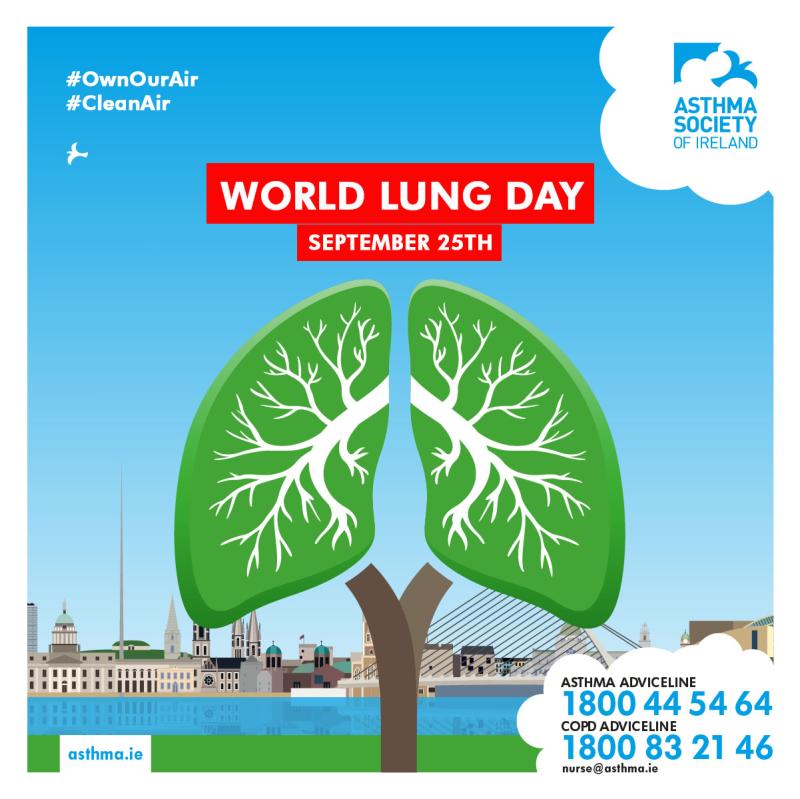 The Environmental Protection Agency's (EPA) 57 air quality monitoring stations around the country have found that, while air quality in Ireland is below the EU legislative limit values in 2018, it is above the stricter World Health Organization (WHO) air quality health guideline values at a number of monitoring sites for fine particulate matter, ozone and nitrogen dioxide (NO2).

The Asthma Society of Ireland is today, on World Lung Day, expressing its concerns on the detrimental effects of air pollution that people with asthma are facing coming into the winter months, following the release of the annual air quality monitoring report.

Sarah O’Connor, CEO of the Asthma Society of Ireland, said: “Air pollution is a public health concern, with potentially harmful effects on all. Children face even higher risks, both to their health and their development. Those with chronic respiratory diseases such as asthma are particularly vulnerable to high levels of particulate matter - fine particles - in the air caused by burning of solid fuel and of nitrogen dioxide from vehicle emissions. Recent research undertaken by RedC and Salutem Insights on behalf the Asthma Society suggests that one in 13 adults and one in 10 children in Ireland have asthma. Especially alarming are the rates of asthma deaths in Ireland which, running contrary to international trends, are on the rise, up from 39 deaths a year in 2012 to 63 deaths a year in 2016. While there are several measures that are needed to reduce these figures, air pollution is undoubtedly a factor. The Asthma Society’s #OwnOurAir campaign includes numerous measures to tackles air pollution at governmental and individual level.”

This World Lung Day, the Asthma Society of Ireland has repeated its call for the publication of the government's Clean Air Strategy and called on all members of the Oireachtas to press for the introduction of the nationwide prohibition of bituminous (smoky) coal, first announced in 2017 and currently at risk due to threats of legal by suppliers, as a first step towards cleaner air in Ireland. Since the implementation of a smoky coal ban in Dublin in 1990, an estimated 8,200 deaths have been prevented. Indeed a number of Councils around the country are recognising the importance of taking immediate action on air pollution to protect their communities and are tabling motions to introduce a ban of bituminous coal in their area.

The Asthma Society considers clean air to be of fundamental importance to health outcomes for the 380,000 people in with asthma in Ireland, but this also extends to people with other respiratory conditions like COPD and lung cancer, and to people with heart disease – a very significant section of the Irish population. In a 2019 survey conducted on Pearse Street as part of the Asthma Society’s #OwnOurAir campaign, 81% said they felt that air pollution in their area noticeably affected their asthma. Many were also very concerned about the safety of their children playing outside.

The Asthma Society of Ireland warmly welcomes the continued important work carried out by the EPA in monitoring air quality in Ireland and echoes its recommendations to reduce solid fuel dependence for home heating and reducing transport emissions of nitrogen dioxide.

The Society runs a free Asthma and COPD Adviceline on 1800 44 54 64. Callers can speak to a respiratory specialist nurse to get practical advice about managing their asthma or COPD or that of their child.