It was tough going in Portugal, but European experience left Harriers wanting even more 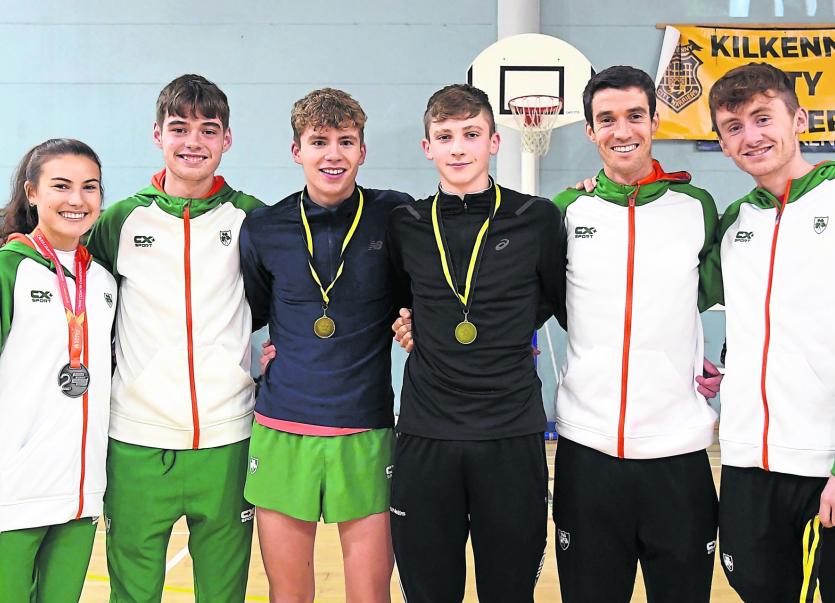 Getting the chance to run for Ireland was something special, but the heroes welcome given to Eoin Everard, Peter Lynch and Shay McEvoy threatened to eclipse that feeling!

“It was a fantastic experience,” said Everard. “It was my first cross-country international and to have three team-mates and a coach from my club – ourselves and Mullingar had the greatest representation of all the clubs in the country – was great. To be able to come back here to the Watershed to give out medals and to be honoured by our own close-knit club is a special thing.”

The three men, who ran in the senior, under-23 and junior races respectively, were overwhelmed at the response as they handed out medals to their KCH clubmates. Getting the chance to put their club on the European stage only served to whet the appetite.

“It was great to get back to the European Cross-Country Championships,” said Lynch.

“I had previously competed as a junior in 2016 so it was great to get back. Although I didn’t have my best race on the day – I was a little disappointed – the overall experience left me hungry to get back there again and to do better next time.”

Like any athlete, running for their country has always been the goal.

“Any time you get to run for Ireland it’s a good day,” said McEvoy, the youngest of the Kilkenny competitors on the Irish team.

“Just like Peter I probably wasn’t delighted with my performance but it’s all experience and a real honour to compete at international level. It’s great to represent a club like ours in Europe.”

Of the Kilkenny quartet McEvoy was the unluckiest of the lot. Having put in a strong performance it seemed the men’s junior team had earned a bronze medal, but their joy was short-lived as a countback dropped them into fourth place behind Portugal overall.

“When we crossed the line, we thought we had the medal so we were celebrating,” he said, recalling the drama at the end of the junior men’s race, “but then 15 minutes we were told we might not have it.

“A little while after that we were told we would – there was that feeling of elation which was taken away from us when we were finally told we finished fourth. It was cruel to think we had it and then find out we’d missed out but that’s sport – you have to move on. I’m still junior next year so I’d hope to be at my best by then. Hopefully we can bring a medal home then, but they’re so tough to get.”

The European Championships brought a level of competition, featuring elite fields. which the Irish team relished.
“A lot of people reading this would have ran the Waterford half-marathon the same weekend and would have been delighted with a 90-minute race,” Everard said by way of explanation of the calibre of the field.

“The guy who came fifth in the men’s senior race would have ran a half-marathon in 59 minutes.

“Then there’s Filip Ingebrigtsen, a multiple European champion, who came 12th in senior race while in Peter’s race there was a real tough field.

“In other years Peter would have been in the reckoning for a medal having come home in the top 13 at the NCAA championships in America, but the standard was so, so high.

“It’s a great thing that the whole European circuit is taking the championships so seriously, but it makes it difficult,” he continued.

“That’s why it’s such an honour to be involved in the championships and in the medal reckoning. To see the women win medals was a great thing to see.”

And the fact that the Irish runners delivered those medal-winning performances on a tough course made them all the more worthwhile.

“It was probably one of the most difficult courses I’ve ever ran,” said Lynch. “I don’t think there was a slack part of the course – it was either uphill or a sharp downhill.

“It was really hard to get into a rhythm as going up the hill would knock the wind out of you, while you couldn’t relax going down the hill as lads would come flying past you. It was a relentless course, torture almost, but it was still fun if a little chaotic.”

Was it the toughest course they’d ran? All three runners agreed!

“The only thing it lacked was muck,” Lynch continued. “If the ground had been sticky you wouldn’t have found a course a whole lot harder.”

How did it compare to Abbotstown, the course for the national championships and the venue for the Europeans in 2020?

“Abbotstown was very mucky, and does have its fair share of hills, but I wouldn’t say anything compared to Lisbon,” said McEvoy.

“Abbotstown has flat portions where you can get into good rhythm and let the legs go but in Portugal you had to take it hill by hill rather than lap by lap. It was the kind of course where you just wanted to get to the finish line.”

After the level of coverage the 2019 games received, the trio agreed it will be huge to have them in Ireland in 2020. And with a fervent Irish support there the occasion will be all the greater.

“It’s massive,” said Lynch. “I’ve been to other places for races, from Sardinia to remote parts of France and there’s always loads of Irish people there to support you.

“Other than the host nation Ireland always seems to have the most supporters at these races so you can imagine the crowds that will be in Abbotstown next year,” said McEvoy, picking up the conversation. “As we’re a sports-mad country I’d say it will be unbelievable up there.”

And leading the way, no doubt, will be the Harriers. The club flag was very prominent in the television coverage from Lisbon.

“It’s amazing – I saw the flag out at the American championships too,” said Everard. “It was brilliant to see.”
The Harriers were one of many Irish clubs who had people in Portugal to support Ireland. It’s something the runners appreciated.

“There were Irish flags everywhere but the reaction from the supporters was something else,” added Lynch. “You might be walking around after a race and people you don’t know are coming up to congratulate you so it’s nice to have that.

“Next year I’ll be a senior, so while it will be hard to make the team, I’d love to be there to get that atmosphere,” he continued.

“It would be crazy to run in the European Championships on home soil, but it’s something I’m hoping to do.”

Making that team, the men reckoned, will be the goal for practically every Irish runner in 2020.

“It was nice to make the team this year, but the great thing about a home championship is that everybody will be out for it,” said Everard.

“The under-23 men’s team are superb – people don’t understand how good coming 13th in the NCAAs like Peter did is; coming in the top 40 is All-American level – so the really good guys are coming through so everyone will be going for it.”

“Everyone is going to want to be there,” McEvoy said of the Irish 2020 team.

“It’s going to be the main thing on everyone’s radar,” Lynch agreed. “They’ll all be trying to get on the team, but that will be great for Ireland as the competition will make for a higher standard.