Cuffesgrange pupils do the haka for Seán O'Brien, the Tullow tank 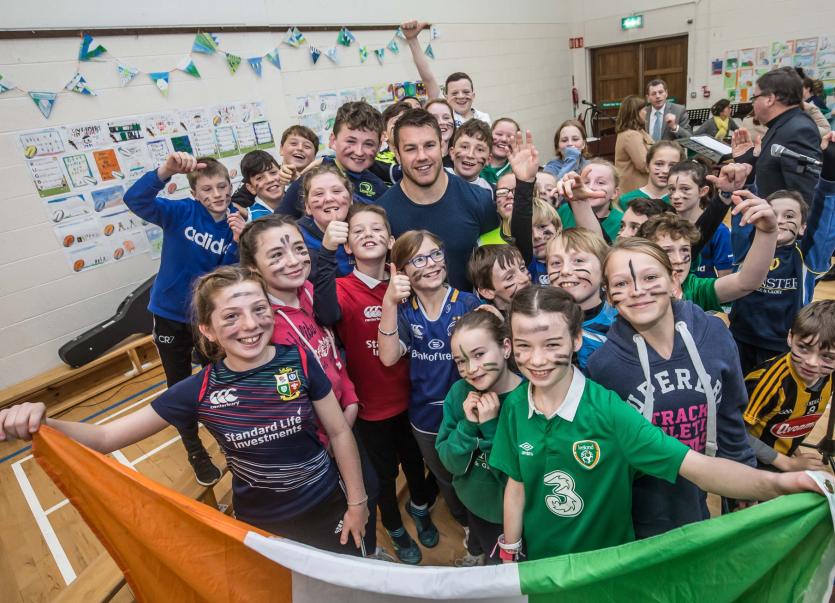 Youngsters in Cuffegrange enjoyed the perfect fun day in school last week when the new playground was opened by the popular rugby player, Sean O’Brien, fondly known as the Tullow Tank.
The playground was constructed last summer and officially opened last week. The excitement among staff, parents pupils at the prospect of Irish and Leinster rugby star Sean O’Brien coming to visit the their school to open the new playground and raise the green flag for Biodiversity was palpable. What better person than the Tullow Tank to come and do the honours.
After greeting his cousin, Patricia O’Donnell, he was led to the new play space where members of the Parents Association greeted him.
Parish priest, Fr Dan Carroll, blessed the space. Sean O’Brien proceeded to cut the ribbon and was treated to The Haka as Ghaeilge by the children from 3rd-6th classes as part of the school’s Irish Week celebrations.
It was on then to raise the Green Flag and Chairman of the Board of Management John Sullivan told great stories about bees and how important they were to our survival. The children from 3rd and 4th class read accounts of bug hotels, bird tables and wildlife audits. The flag was then hoisted to great cheers by Sean O’Brien assisted by the oldest girl and youngest boy in the school.
The group then moved to the hall where the children from the Pre School up to sixth class and their parents and teachers were introduced to the rugby legend.
Principal Jim Fennelly told the crowd that Sean O Brien was born on Valentine’s day in 1987. Mr Fennelly remarked how it was no surprise then that Sean’s love affair was to be with sport and praised his wonderful achievements with Leinster, Ireland and the Lions. Sean thanked the school for inviting him and he encouraged the children to play sport, any sport that interested them.
“It will lead you to a great life, a healthy life and a rewarding life,” he said.
With all the speeches over it was time for tea and cake. Sean O’Brien continued signing jerseys, rugby balls, hurleys and flags for another hour and gave generously of his time. On his departure he was given a great send off and that was by the ecstatic parents.