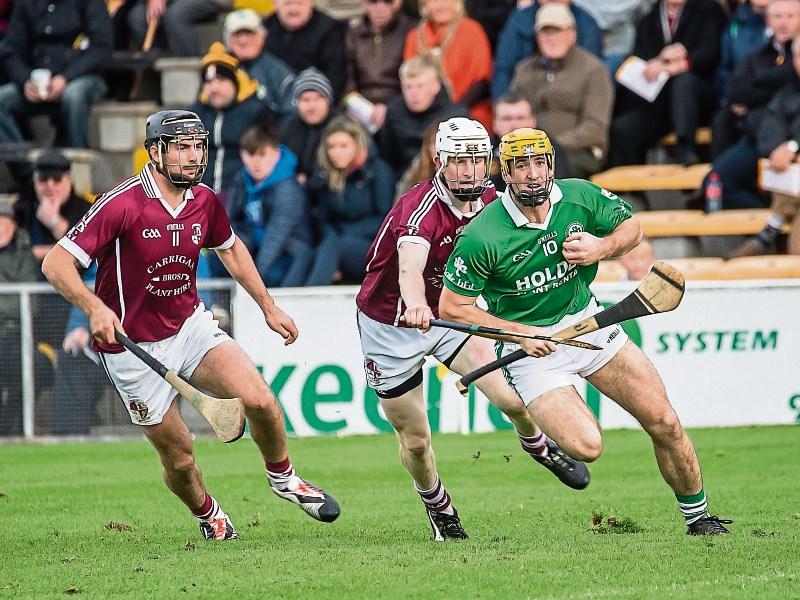 In the end two of their big guns came to the rescue with late scores that made a huge difference as Ballyhale Shamrocks kept the double dream alive.

Victory earned the 15 times champions  a place in the final against O’Loughlin Gaels on Sunday week with the possibility of completing the league/championship double as part of the equation.

This was far from vintage hurling at Nowlan Park on Sunday, but in a game in which small and tight margins were huge, the Shamrocks found that little extra against opposition that complete the league/championship double last season.

With the clocking ticking beyond the 58 minutes mark a foul on David Langton on the 65 earned Clara a free. Chris Bolger posted his ninth score of the match to leave the minimum between the teams (0-17 to 0-16).

Within a minute Colin Fennelly, who had a thundering second half during which he claimed three scores from play, bounced off a heavy tackle on the right wing at the city end before shooting a lovely point from 40 metres.

A little over a minute later T.J. Reid took a beautiful delivery from his brother, Eoin, before shooting the last point of the game.

Clara, patient and calculated throughout, stormed the opposing goal. Their scoring ace, Chris Bolger, had a close in free blocked out for a 65 as 62 minutes showed on the clock.

When the 65 was taken, no less than 27 players populated the Shamrocks goal area as Neil Prendergast sent in a hopeful ball.

A schemozzle followed the arrival of the ball on the winners ‘20’, but  when Shamrocks captain Mark Aylward charged from it with ball in hand, the referee sounded the final whistle.

Neither side may be the blistering force they once were, but experience and cuteness has left them heavily armed.

Clara never, not once, panicked when behind. They kept up an even paced chase, with the half-back trio of Neal Prendergast, Tom Ryan and David Langton massive, along with county captain, Shane Prendergast, who operated things behind them.

Lester Ryan dogged it out in midfield, and along with scoring gold digger, Chris Bolger - he had some championship - the late charge threw up other wholehearted  performers in Conor O’Shea, Jason Byrne and Ciarán Prendergast.

All their work amounted to a considerable effort, but it still wasn’t enough against a team still finding its way, one would suggest, but blessed with versatile players who can produce big in any of a variety of positions or challenges put to them.

Perhaps the biggest example of this for Shamrocks this season  is the transformation by Richie Reid from goalie or midfielder or attacker to being a defender of note. He had a huge game here.

Regular attacker Colin Fennelly was cast in a free role around midfield during the closing quarter. Again he adjusted, came up with three crucial points at crucial times to give his team boosts when badly needed.

And then of course there were the prize efforts of ’the ever dependables’, T.J. Reid, Henry Shefflin, reshaped into a  midfielder of match changing ability,  and Bob Aylward. You can twist and bend these guys any way you like, but you won’t break them too easily.

This was hurling played on the cautious side, with the emphasis on stifling the opposition, and it worked.

The teams were greeted by heavy rain when they arrived on the pitch, and Shamrocks had first use of the wind blowing towards the country end.

They didn’t head off at a shocking pace, although they picked off three scores during the opening five minutes. These came through Shefflin, after the ball had been handled by five other Shamrocks players, T.J. Reid, with an assist by Henry, before Shefflin pointed a free from midfield.

Chris Bolger got Clara off the scoring mark in the eight minute when he punished a foul on Ciarán Prendergast on the ’40’. Without ever being seriously out-played they found themselves 0-3 to 0-9 down in the 23rd minute, which was their worst state of the match.

Lester Ryan and T.J. Reid, in that order, swapped scores before Clara reclaimed serious ground in the run up to the break.

They did so by pulling back points through Liam Ryan, after being placed by Conor O’Shea, and Chris Bolger (2) to get themselves into a decent position at the break when   0-7 to 0-10 down.

Having motored nicely, without ever being commanding, Shamrocks were not as well off as they might have been.

For some strange reason, the winners were a bit jittery after the turn when they failed to gain any reward from two handy enough free. In the same time Bolger pulled back one for Clara before he turned a 65 won by Ciarán Prendergast into a gain in the 37th minute (0-10 to 0-9).

Twice during the following minutes Shamrocks upped their advantage to a pair of points. But when Clara hit back through Jason Byrne and Conor O’Shea they crawled back to level terms at 0-12 each in the 45th minute.

Clara were very sure and patient in their play from defence at this time, but when an attacker retreated to help and delivered a lax clearance, he gifted Henry Shefflin a point (0-13 to 0-12).

Chris Bolger won a good ball before levelling again, and the rising Clara tide took them clear in the 48th minute when Neal Prendergast hit the target after Conor O’Shea created the opening.

Jack Langton and T.J. Reid, a score of real class created by a cross field pass from his brother, Eoin left the gap at two three minutes from the end.

Bolger cut it to one moments later, but then Shamrocks big men produced big.

A familiar story, really! A tight win, but a good one against durable opponents.