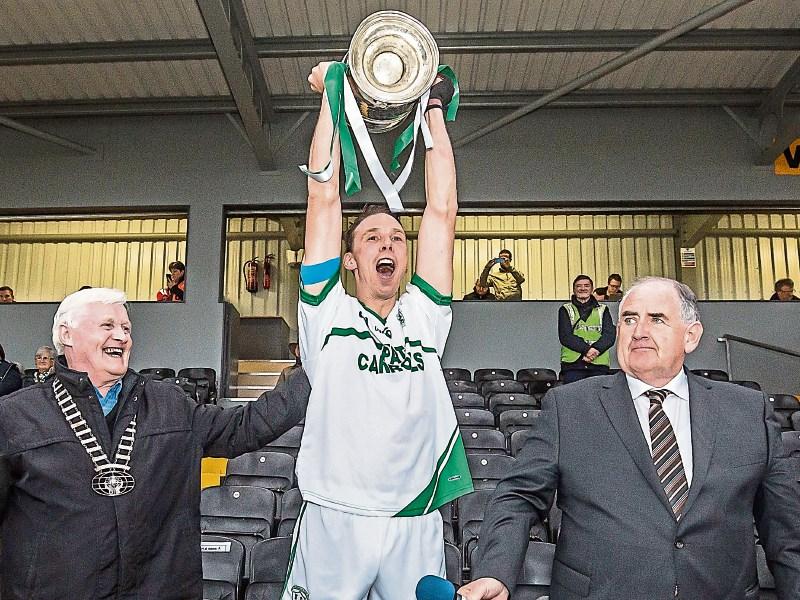 The performance was laced with the passion and desire of Kilkenny in their pomp, and the attitude and approach served O’Loughlin Gaels well.

The St John’s Park outfit blitzed mighty Ballyhale Shamrocks during the closing quarter, out-scoring them by 0-5 to 0-2 as they ran up their fourth victory in the senior hurling championship final (0-19 to 1-12).

A three point difference might not, on the face of it, quality as a blitz.

However, when you add substance to the story like Shamrocks were held scoreless during the closing 10 minutes and O’Loughlin’s ran up five wides in-a-row during a frenzy of shooting in the dash to the line you get a clearer picture of the tale that unfolded at Nowlan Park on Sunday.

It wasn’t the best county final. In fact, some  of the action during the opening half bordered on the boring.

But as the second half unwound and Shamrocks were experiencing extreme difficulty in trying to open the opposing defence to create chances, the belief within the O’Loughlin’s ranks soared and they simply took over the game.

The long servers served well again - centre-back and captain, Brian Hogan (35); Alan Geoghegan (38); the Kearns brothers and that lively veteran who has been irrepressible all season, Martin Comerford (37).

It there  was to an award for the ’Player of the Championship’, Comerford would probably walk it. He was the one who turned difficulty into opportunity on countless occasions during the campaign.

Ah yes, this was a victory for young and old, or being politically correct, should that be more senior?

For when O’Loughlin’s began to feel the flow of confidence that they had the measure of the opposition; that this could be their day,  they simply cut loose.

The youngsters thrilled  with the energy, calmness and intent in their hurling.

One was particularly taken by Huw Lawlor (20), Paddy Butler (24) and Paddy Deegan (20), who were terrific in the finishing straight when they unburdened themselves and simply let rip.

Particularly good during that time too was Danny Loughnane, who seemed to be everywhere assistance was needed, while Mark Bergin was Mark Bergin - chance taker as chances came his way.

He didn’t miss a free, and he finished with 11 points in the sack.

Oh, with Shamrocks wobbling and there to be knocked over, O’Loughlin’s sent on young Sean Bolger (18).

He was a busy bee with a sting. He  landed one score and got in three shots at goal during a 13 minute run of duty. That was fair going.

Of course, when things go right and teams win, virtually everything they did can appear to have been right.

Shamrocks found their best, most dangerous men well marked and held in check. That wasn’t an accident.

T.J. Reid, while he plundered an early goal from virtually nothing, was well held and crowded every time he was in possession. He wasn’t given space or opportunity to cause damage.

Ditto Colin Fennelly, and the experienced Henry Shefflin was man marked into a quiet, secondary role.

The best of the Shamrocks was seen from young Darren Mullen, who is part of the long terms future, and the busy, busy Mark Aylward.

For some, the long journey on the road simply caught up on  them as O’Loughlin’s out-lasted, out-ran and out-worked them.

“There has been intent about the players all season. Their skill and determination were rewarded in the end.”

Shamrocks didn’t make it easy for the new champions at the start. After T.J. Reid, following a foul on Rónán Corcoran, and Mark Bergin - a foul on Mark Kelly - traded early points, the losers grabbed a goal from virtually nothing.

A harmless enough ball was swung in from the left at the country end goal. T.J. Reid half ran, half stumbled through the nervous Gaels defence before getting off a weak shot at the target. The ball ended up in the net.

That goal was the difference for 20 minutes or so until O’Loughlin’s had a brace of minors from Bergin - following fouls on Paddy Deegan and Comerford - to cut the deficit to the minimum, 1-5 to 0-7.

Shamrocks picked things up again, and points from Henry Shefflin and T.J. Reid, against one reply from Sammy Johnston, left them leaders at half-time by 1-7 to 0-8.

Within 30 seconds of the restart Paddy Butler swept the ball on, one-handed from midfield, and it was claimed 30 metres  further forward  by Martin Comerford, who pointed.

Then on 32 minutes Huw Lawlor drew a foul, and Mark Bergin turned the opportunity into the equalising point (1-7 to 0-10).

Already the exchanges were warmer, tougher too.

As casual as you like, Shamrocks, almost like Shamrocks of old, breezed three points clear again with a sharp burst lasting as many minutes (1-10 to 0-10).

We weren’t to know it at the time, but that was to be the best from the losers all afternoon.

A foul on the industrious Paddy Butler earned Bergin another point. Similar returns were earned following a foul on Comerford.

Again Shamrocks threatened, but at the end of a great move Patrick Reid shot wide.

O’Loughlin’s hit the front for the first time in the 44th minute when scorer Danny Loughnane was put in space by Mark Bergin (0-14 to 1-10).

Shamrocks hit back through Patrick Mullen, with an assist from T.J. Reid.

Alan Geoghegan then worked a ball to Martin Comerford, who drew one of the biggest cheers of the afternoon when finding the target from 30 metres on the left sideline.

Again Shamrocks hit back, this time in the person of Eoin Reid.

There were exactly 10 minutes left to play. The hurling was more open and very lively now, but Shamrocks were having extreme difficulty in all departments against an O’Loughlin’s defence that was growing more powerful and cohesive.

This time the O’Loughlin’s lead point was posted by Danny Loughnane, after receiving from the flying Paddy Butler. Within seconds lively sub Sean Bolger scored.

Colin Fennelly made a determined break at the other end, but his shot missed the target.

Danny Loughnane made a great catch at the other end before off-loading for Paddy Deegan, who scored a wonderful point.

O’Loughlin’s balanced the books in the 55th minute when Mark Bergin landed his last point from a free.

On O’Loughlin’s roared as their defence drove back virtually every assault on their territory. They created chances. They missed them.

What matter, the day’s work was done. The Tom Walsh Cup was on its way back to St John’s Park.

The Leinster club champions beckons now on November 20. The opposition will be provided by Oulart-the-Ballagh (Wexford) or St Rynagh’s (Offaly).

O’Loughlin’s assured they will be ready. We look forward to the adventure.