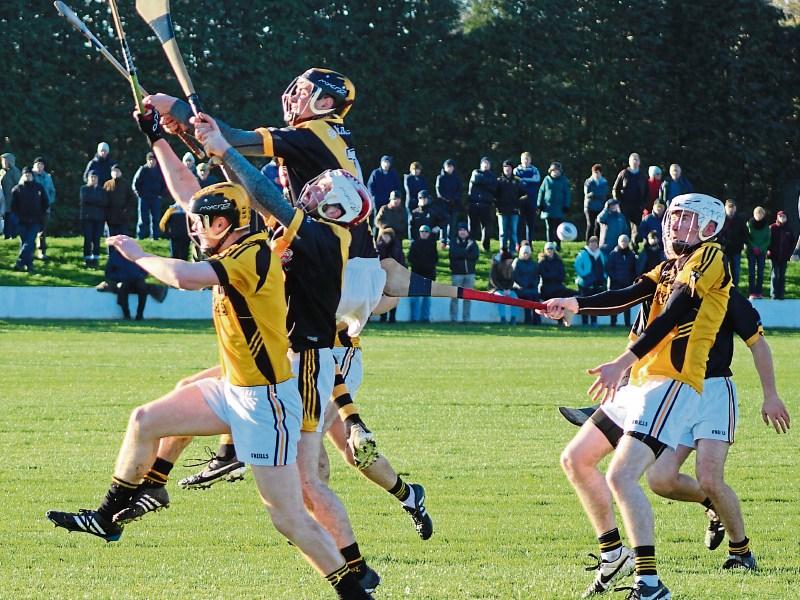 Action from the Piltown versus Slieverue under-21 game

It was a cold but sunny November afternoon when Piltown and Slieverue clashed  in the semi-final of the South  under-21 Roinn B  hurling  championship in Mullinavat on Sunday.

There was a great turn out of support from both clubs, and fans were rewarded with a good, competitive game.

Piltown wasted no time in getting down to business. They registered an early   point through  Jamie Norris virtually from the  throw-in.

Slieverue’s Jack Frisby opened Slieverue’s account  with a point in the third minute.

Slieverue’s Oliver Mullally and Piltown’s Shane O’Dwyer traded points from  frees in the fourth and seventh minutes as the action  settled into a fast tempo.

Centre-back Aidan Nugent won a Slieverue puck-out in the eight minute and delivered the ball to corner-forward Cian Kinsella, who tapped it over for  his first point.

Another converted free from Shane O’Dwyer in the 12th minute kept  scoreboard ticking over for Piltown.

A lovely point from Eoin Kenny in the 14th minute kept Slieverue well in contention.

Another point from Cian Kinsella and a converted free from Shane O’Dwyer brought the action to the 18th minute and shortly after Slieverue went on the attack and were headed straight for goal when Piltown conceded a penalty.

Paul Rellis stood up to take the penalty. He raised the green flag with an unstoppable strike.

The sides were level again.

Another point from Cian Kinsella and a converted free from Shane O’Dwyer brought the action  to half time at which stage the score was Piltown 0-8, Slieverue 1-3.

The losers opened the second half with two points from Paul Rellis, one a converted free.

Shane O’Dwyer converted another free for Piltown in the 33rd minute which was followed shortly after by another great point from Eoin Kenny.

Following a powerful  passage of play and a hard-won ball, Michael O’Dwyer found John Kenny, who rifled the ball to  the back of the net in the 35th minute.

David Kinsella and Ian Long, both of whom fought hard all afternoon, were rewarded with a couple of great points in the 55th and 57th minutes.

The next five minutes took  the action  into injury-time. Cian Kinsella lost his marker and tapped over another three fine points.

Shane O’Dwyer closed out the match with a converted free deep into injury time to give Piltown a fine win.

This was a good performance from a cohesive Piltown team, which included  six sets of brothers, of which five sets started.

For Slieverue, the best were   Paul Rellis and Eoin Kenny.