The Gaels blow up some storm after slow, hesitant start 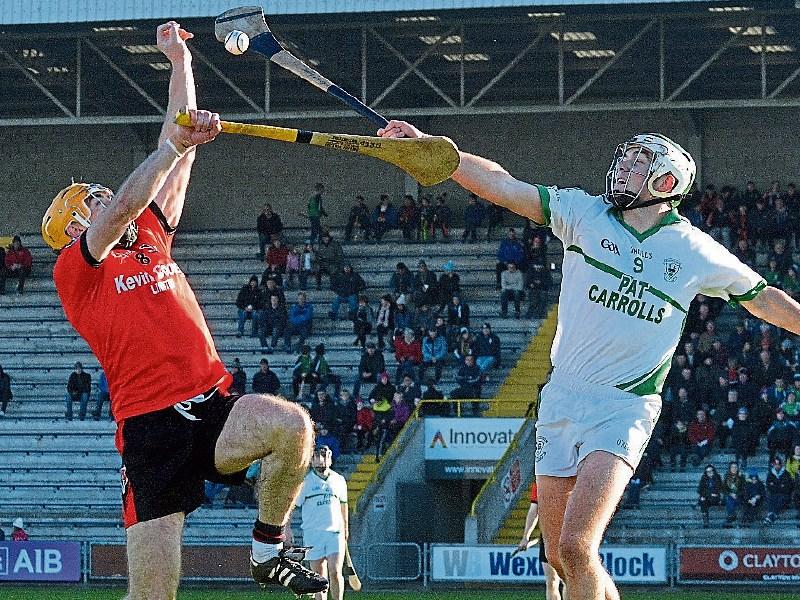 Not this time - Paddy Deegan (O'Loughlin's) knocks the ball away from David Redmond (Oulart) during the Leinster club SHC semi-final. Photo|: Willie Dempsey

O’Loughlin Gaels, the pride of Kilkenny, matched terrific versatility with skill as they eclipsed the champions and booked a place in the Leinster  final.

A nicely  taken goal for O’Loughlin’s by Mark Kelly, their first score, in the 11th minute slowed down the run away train that was Oulart at that time.

A second goal, this time a lucky effort from a strike on midfield by Mark Bergin in the 18th minute, all at once rattled the defending champions and inspired O’Loughlin’s to eventually hit a  level of performance never before seen from this particular crew.

By half-time this cold November Sunday was beginning to look much brighter for O’Loughlin’s as they led by 2-6 to 0-10.

When Oulart’s running game out of defence broke down in the 36th minute and Sammy Johnston was able to race away and shoot unchallenged to the net to earn his side a 3-8 to 0-13 lead, the balance of power  shifted totally.

From there on, with Martin Comerford brilliant as attack leader; Mark Bergin equally so as a busy, busy midfielder and with the likes of Andy Kearns drawing down the shutters in defence, Oulart’s reign was all but over  and O’Loughlin’s were on their way into  the final against Cuala (Dublin) on Sunday, December 4.

“The players rose to the challenge,” insisted O’Loughlin’s manager, Aidan Fogarty, when one highlighted where the match was played.

“The whole team played well,” he continued. “It was one of those days, like in the last 20 to 25 minutes of the county final  when everyone got going.”

Oulart dazzled with the pace and precision of their early play as the  emphasis was on a well rehearsed short passing game.

A trip on Nicky Kirwan earned them their first point from a Kirwan free. The second score came via the same route, but the three that followed from fine finisher, Garrett Sinnott (2) and David Redmond were the result of the fast use of possession.

O’Loughlin’s were under pressure, but still they had registered three wides during the same 10 minute period.

On 11 minutes Mark Kelly got a run at the opposing goal, and as he hit the 20 metre line he off-loaded to Sammy Johnston on his left. The  latter was crowded out as he tried for a goal.

The ball wasn’t really cleared, and when it came back into the goal area Kelly hung it up in the top right corner of the net with a fierce drive from the other side of the square (0-5 to 1-0).

Oulart simply drove on, making and finding space with well aimed deliveries. Peter Murphy tapped over when put in space by a colleague before Kirwan posted another free to leave the divide 0-7 to 1-0.

O’Loughlin’s hung in with a point from Mark Bergin, made by a pass from Comerford.

Oulart shrugged off the loss. Their next two scores from Des Mythen and Garrett Sinnott arrived after both drifted into space and were picked out with deadly accurate passes from  colleagues (0-9 to 1-1).

Then on 18 minutes Lady Luck threw a glance in O’Loughlin’s direction. Mark Bergin pounced on a ball near midfield and pumped a shot towards the country end goal. The ’keeper fumbled the attempted catch.

The ball went over his head, struck the inside of the net and came back out. The  umpire immediately reached for the green flag.

Within a few seconds a foul on Mark Kelly was turned into a point by the very involved Mark Bergin.

By this time O’Loughlin’s had reorganised their defence in an attempt to stem the flow through the centre. Alan O’Brien moved to No. 6, and Brian Hogan, who had been struggled with the  flu during  week, moved to the wing.

O’Brien shored up the middle, and Hogan fared better on the wing too.

This move, along with giving Mark Bergin a free rein around midfield, were master strokes, game changers, by the O’Loughlin’s sideline team.

The O’Loughlin’s equaliser was a brilliant score. Huw Lawlor pulled off a great block on his own  ’40’, and when Martin Comerford got on the end of the clearance he pointed (0-9 to 2-3).

Lawlor then provided Paddy Deegan with  the pass for the next score in the 27th minute to put O’Loughlin’s ahead for the first (2-4 to 0-9).

Suddenly the  early fizz was gone out of the Oulart game, although they did get back to level through Rory Jacob.

But in the sprint to the rest, O’Loughlin’s scored through Mark Bergin, following a foul on Kelly, and Huw Lawlor to lead by 2-6 to 0-10 at the rest.

Five minutes into the new half it was all square again (2-7 to 0-13), but the deciding chapter was not far off.

A foul on Martin Comerford earned Mark Bergin the lead score for the Gaels.

Oulart then went for a short puck-out, but when two defenders tried to transfer possession on the ‘40’, Sammy Johnston intercepted. He got a clear run at goal, with Comerford for support.

The next six  scores also fell to O’Loughlin’s - Danny Loughnane, Mark Bergin, Paddy Deegan, Martin Comerford at the double (the first a great move involved Mark Kelly and Loughnane) and Kelly to leave O’Loughlin’s 3-14 to 0-13 clear  by the 46th minute.

Oulart pumped hopeful high ball towards the opposing goal after that. Kearns, O’Brien, Lawlor and company simply mopped it up.

A good day for O’Loughlin’s? It was far better than that!