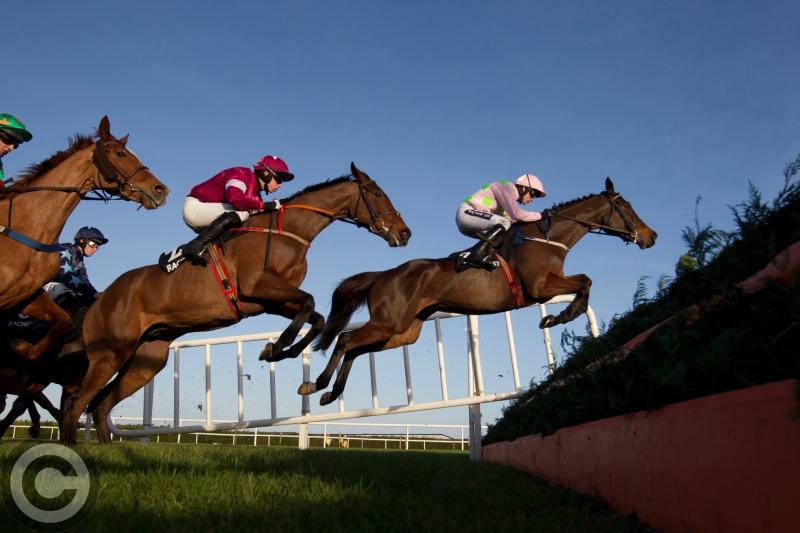 David Mullins recorded the second treble of his career when dominating the card on Tramore on New Year’s Day.

The Aintree Grand National winning rider combined with Henry de Bromhead to win the featured Listed At The Races Chase on 2/1 chance Champagne West and had earlier partnered 5/4 favourite Adreamstillalive to take the 2m maiden hurdle for the Knockeen trainer.

De Bromhead also recorded two winners at Fairyhouse on the same afternoon but Mullins went one better when landing the 2m handicap hurdle on Peculiar Genius, a 10/1 chance, for Enniscorthy trainer Paul Nolan.

Brightest Flame race to a 20-length success at odds of 2/1 in the 2m5f maiden hurdle for Noel Meade and Ger Fox while 5/2 favourite Returntovendor recorded a 14-length victory for Kildare trainer Jarlath Fahey and Ian McCarthy in the handicap hurdle over the same distance.

Mouse Morris enjoyed no shortage of success in 2016 and he got the New Year off to a winning start as the Barry Foley-ridden Catalaunian Fields won the rated novice chase at odds of 10/1 while 20/1 shot Line View landed the handicap chase for Bandon trainer James Dullea and the in-form Paul Townend.

Dylan Robinson rode the first double of his career and in doing so reduced his claim to 5lbs at Fairyhouse on New Year’s Day. Henry de Bromhead provided the 21-year-old rider with both winners and pair took the mares’ maiden hurdle with 7/1 chance Montana Belle and the beginners’ chase with Balko Des Flos, a 5/2 shot on which Robinson replaced the injured Bryan Cooper. Keith Donoghue took over from Cooper on the Gordon Elliott-trained Woods Well in the opening maiden hurdle and made the most of the opportunity when landing the spoils on the 9/2 chance.

Another rider to miss out on a winner was Danny Mullins who was suspended as Shannak, trained by his father Tony, took the 3m handicap hurdle with Ruby Walsh deputising. Robbie Power continued on his good run when teaming up with Cathy O’Leary’s Conright Boy to land the 2m handicap hurdle at odds of 14/1.

There was a 7/1 winner of the 3m1f handicap chase as Andrew Ring brought Capture The Drama home a four length winner for Newmarket-On-Fergus, County Clare trainer Aengus King while the session ended in familiar fashion as Willie and Patrick Mullins combined to land the bumper with 8/15 favourite Next Destination. It was the champion trainer’s 25th winner of the festive period.

Willie Mullins sent out the first and last winners at the final meeting of 2016 at Punchestown on New Year’s Eve. Ruby Walsh made all the running on the gambled-on 2/1 joint-favourite Childrens List to land the opening beginners’ chase for the champion trainer and David Dunsdon, the former world Fegentri champion rider, bagged his first winner in Ireland when partnering 4/6 favourite Redhotfillypeppers to an all-the-way success in the bumper.

Bryan Cooper was injured in the opening event and he missed out on a winner with Jack Kennedy stepping in to partner the Gordon Elliott-trained 7/4 favourite Dakota Moirette in the three-year-old maiden hurdle.

Sent off a 9/2 joint-favourite, Show And Go got up in the final strides to win the handicap chase for Henry de Bromhead and Dylan Robinson and there was another exciting finish to the 2m4f handicap hurdle as 5/2 favourite Duke Cass just held on to win by a head from Mine Now for Skerries-based Karl Thornton and Donagh Meyler.

A half-a-length was the winning margin as 14/1 chance Tethra beat Rapid Fritz in the opportunity handicap hurdle for Ratoath, County Meath trainer Dermot McLaughlin and Danny Hand who was riding his first winner. By far the most impressive winner of the day was the Jessica Harrington-trained Supasundae who easily landed the conditions’ hurdle at odds of 7/4 favourite under Robbie Power.

Over 40,000 racegoers enjoyed the action over the four days of the Limerick Christmas festival. Those in attendance on the final afternoon on Thursday surely raised a toast to Willie Mullins and Paul Townend who shared three winners.

The pair took the opening maiden hurdle with even money favourite Pylonthepressure and followed up straight away as Benie Des Dieux ran out the impressive winner of the mares’ beginners chase at odds of 4/6 favourite. The treble was completed when Penhill, only a 3/1 third favourite, took the Grade 2 Guinness Novice Hurdle on his first attempt over three miles.

Michael Hourigan ended the festival on a high with two winners. He took the rated novice chase with 6/1 chance Undressed who won well under Mikey Fogarty and the 2m4f handicap hurdle with the Cian Collins-ridden Moores Road who was sent off the 3/1 favourite.

Nenagh trainer Ray Hackett and Adam Short combined to win the 2m3f handicap hurdle with 10/1 chance The Ballyboys while Minella Fair won the bumper at odds of 3/1 for Noel Meade and Danny Benson.

The four-day Leopardstown Christmas festival might have belonged to Willie Mullins but it was Jessica Harrington and Henry de Bromhead who took the major honours on the final day of the meeting on Thursday.

Harrington combined with Robbie Power to land the Grade 1 Neville Hotels Novice Chase with the well-supported and hugely promising Our Duke who overcame some untidy jumping to narrowly account for the Drinmore Chase winner Coney Island. Petit Mouchoir had an easier time of it as he raced to a seven-length victory over 2/5 favourite Nichols Canyon at odds of 6/1 for Henry de Bromhead and Bryan Cooper in the Grade 1 Ryanair Hurdle.

Typically, Mullins didn’t leave empty-handed and he saddled two winners. Battleford, the 4/9 favourite, won the 2m4f maiden hurdle under Ruby Walsh and the champion jockey was again in the saddle as 1/3 favourite Let’s Dance scored a 17-length win in the Grade 3 mares’ hurdle.

Rookie trainers Joseph O’Brien and Robbie McNamara were also on the scoresheet. J.J. Slevin partnered 4/1 shot Exactoris to win the 2m4f handicap hurdle for O’Brien while Finny Maguire did the steering as 9/4 chance Quick Grabim impressed with a five length success in the bumper for Curragh-based McNamara. Cappoquin trainer Patrick Duffy and Conor Brassil teamed up to land the opportunity handicap chase with 12/1 shot Courtncatcher.

Galway trainer Stephen Mahon had a day to remember at Limerick on Wednesday where he saddled two winners. He won the veterans’ handicap chase with 10/1 chance Smokey Joe Joe who won with a little in hand under Luke Dempsey and followed up when Barry O’Neill partnered 8/1 shot Ballyluskey to a cosy success in the bumper.

Gordon Elliott also enjoyed two winners at the meeting with Stone Hard landing the beginners’ chase at odds of 7/4 under Keith Donoghue and Missy Tata, the 2/5 favourite, making all the running to win the Listed hurdle for Daryl Jacob.

Another to win at long odds-on was Coquin Mans who just took the 2m maiden hurdle for Willie Mullins and Paul Townend, the 1/3 favourite winning by just a head from 50/1 chance Surf Instructor. His trainer Henry de Bromhead and rider Dylan Robinson went one better in the 2m maiden hurdle which they won with 5/1 chance Island Remede.

Pat Coffey, who trains in Nenagh, was responsible for the longest-priced winner of the day as Barrys Jack took the 2m5f handicap hurdle at odds of 22/1 under John Fitzpatrick.

The Willie Mullins-trained Min stole the show on the opening day of the Leopardstown Christmas Festival when easily landing the Grade 1 novice chase in the hands of Ruby Walsh.

His task was made far easier when Identity Thief, his main market rival, was pulled-up after the fifth fence having gone lame and the 4/5 favourite raced to a nine length success over Ordinary World. Mullins and Walsh had earlier taken the 2m maiden hurdle with 7/4 favourite Bunk Off Early and were also on the mark with the gambled-on 13/8 favourite Bapaume in the Grade 2 juvenile hurdle.

Noel Meade and Sean Flanagan took the 2m2f maiden hurdle with 3/1 shot Joey Sasa who won in good style. There was a well-supported 5/1 winner of the handicap hurdle over the same distance as Concordin got up on the line to score for Kinsale’s Robert Tyner and Mark Walsh. Another Cork winner was Lake Takapuna who landed the handicap chase for Jim Culloty and David Mullins at odds of 6/1.

Joseph O’Brien teamed up with Tom Hamilton to land the bumper with 8/1 chance Aeglos. It was a first winner in Ireland for Hamilton, who hails from Scotland.

Willie Mullins added to his three winners at Leopardstown with three more at Limerick on St Stephen’s Day. The champion trainer landed the featured Grade 2 novice chase with 4/9 favourite Bellshill who readily accounted for stable companion Haymount under Paul Townend. Townend had also been on board 6/4 favourite Bravissimo who took the 2m3f maiden hurdle with the minimum of fuss while Patrick Mullins did the steering as 4/11 favourite Miss Sapphire won the bumper to complete his father’s treble.

Mouse Morris and Andrew Ring combined to win the opening maiden hurdle with 4/1 chance Tout Est Permis while 7/1 chance Val De Ferbet had plenty of good fortune on his side when taking advantage of the fall at the second last hurdle of Runfordave to take the 2m4f conditions’ hurdle for Andrew McNamara Jnr and Sean McDermott who has been plying his trade with considerable success in America in recent years.

McDermott helped himself to a second winner when Head Turner won the mares’ handicap hurdle at odds of 12/1 for Leighlinbridge trainer Pat Fahy. Robert Tyner was among the winners at Leopardstown and his Pause And Ponder, the 6/4 favourite, took the 2m3f handicap chase under Phillip Enright.