Out of the bunker - golf news from across Kilkenny 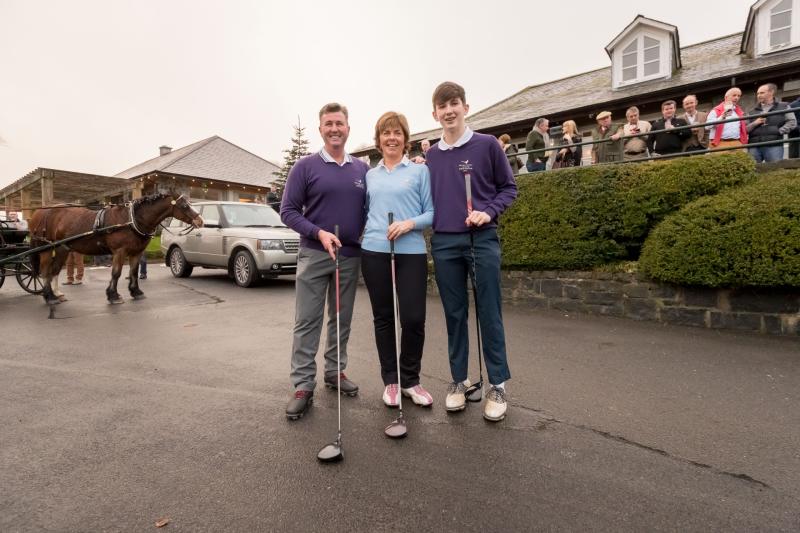 The member/guest fourball stableford was played in unusually mild conditions at Mount Juliet GC on Sunday.

The competition saw a very convincing win for the Tipperary duo of Pat Stakelum and John Nevin with a brilliant score of 52pts. They were four shots clear of their nearest rivals, Martin O’ Halloran and Michael Kelly, who in turn were a shot clear of third-placed Jim Gorey and Paudie Lannon.

The winners turned with 24pts, which included their bonus point, but really turned on the style with a second nine holes score of 28pts which included three holes where they scored four points (14th, 16th and 17th). Their combined score was level par for the 18 holes.

In second place Martin and Michael scored 24pts for each nine holes and had a shot to spare from Jim and Paudie, who scored nines of 24 and 23pts respectively.

A good year was reviewed when the members of Callan GC held their annual meeting on Friday.

Outgoing club officers presented the club finances and signed off on a good year for the club thanks in no small part to having captain Nigel Dagg at the helm.

The last year has seen the reappointment of a club professional in Brian Doheny, a boost for the progressive club, while catering provider Lukasz Banaszkiewicz has made the bar and restaurant a place the club can be proud of.

Results on the course are also on the up. The men’s inter-club teams were very close to bringing home prizes while the ladies section had some truly fantastic performances on the inter-club scene.

The new team for 2017 is led by Captain William Gilbert and Lady Captain Mary O’Hanlon who will continue the tremendous work started during Martin Maher’s captaincy in 2014 and continued ably by Pat Mulrooney in 2015 and Nigel Dagg last year.

WINTER - The men’s Winter League is almost at the halfway point. After five weeks Richard Condon’s team lead the way with 358pts, followed closely by Nigel Dagg’s team with 354pts.

Richard McKeever’s team is third with 352pts while fourth place is held by Pat O’Keeffe’s team with 346pts. The top six is completed by Liam O’Hara’s team, who have 342pts.

With 49pts separating the top ten teams there is still everything to play for in the remaining eight weeks. This year’s league has attracted a fantastic entry and has been a great success.

WEEKEND - Despite the inclement weather affecting play early on Saturday the weekend competition went ahead over the two days.

Some great golf was played with the winners, John Proctor and John Ryan, shooting 46pts to win on a countback from Patrick Donovan and Brian Dignam. Sean Brett and Paul Madigan were third on 45pts.

COURSE - The course is in superb condition at present. The greens are coming back to their best after being lightly pole-forked last week.

LOTTO - There was no winner of the golf club lotto jackpot. Numbers drawn were 7, 11, 31. Lucky dip winners (€30) were Melanie O’Brien, Ned O’Brien and Anita O’Brien. Sellers were Anne McEvoy and Joe Cuddihy. The jackpot is €1,650.

The Winter League continues at Castlecomer GC, with the seventh round in progress.

Team F lead the way with a 13-point advantage over their nearest challengers, but there are only 37pts between the top six. The top four teams will qualify for the final, which will be held on weekend of February 12.

Members of Gowran Park GC are advised to make a note in their diary for the Captains’ Drive-In.

The ceremonial drive into office will be held at the club on Sunday, February 26.

WINTER - The Winter 11-hole competition continues this weekend with a scotch foursomes competition.

GOLDEN - The Golden Golfers’ weekly outing was lost to frost last week. Competition continues as normal this Friday with an 11.30am tee time.

MEMBERSHIP - The club is now accepting applications for 2017 membership. Full details on all rates are available from the club, tel 056-7726699.

Members of Mountain View GC are advised to take note of the club’s local rule on Winter Rules scores of 40pts or more in singles competition.

Any player who has three returned scores of 40pts or more during Winter rules is cut 1.0 shot but returns to his official handicap at the end of the Winter Rules season. More information on the local rules is available from the clubhouse noticeboard.

WINTER - The final of the Winter League will be held on Sunday, February. All finalists will be notified of their tee times by text.

FIXTURES - The full fixture list for 2017 is now posted on the clubhouse noticeboard.

SPLIT THE POT - The next Split the Pot draw is on Sunday. Single entry is €2, with full details available from the clubhouse.

There was a big turn out for the competition, with all enjoying the fun and relaxed atmosphere of the scramble format.

WINTER - The closing date for the ladies Winter League is today (Wednesday).

MEMBERS - The club has welcomed a number of new members for the 2017 season. Details on introductory membership rates, plus prices for golfers under-30 and student golfers are available from Joe Foran, tel 051-421433.

SENIORS - As the age-old proverb says, ‘when the going gets tough-the tough get going’. So it was last Thursday when 17 hardy senior golfers faced out into anti-golfing weather which featured sleet interspersed with flurries of snow. Added to that, there was a biting north-west wind which chilled straight to the bone.

However, as the day progressed the sun made its appearance and all five teams completed the 18 holes.

Nearest the pin prizes went to Eamon Delaney on the ninth hole and John Shalloe on the 11th.

The seniors will have their regular outing tomorrow (Thursday). All players are asked to be in good time for the draw at 10.40am.