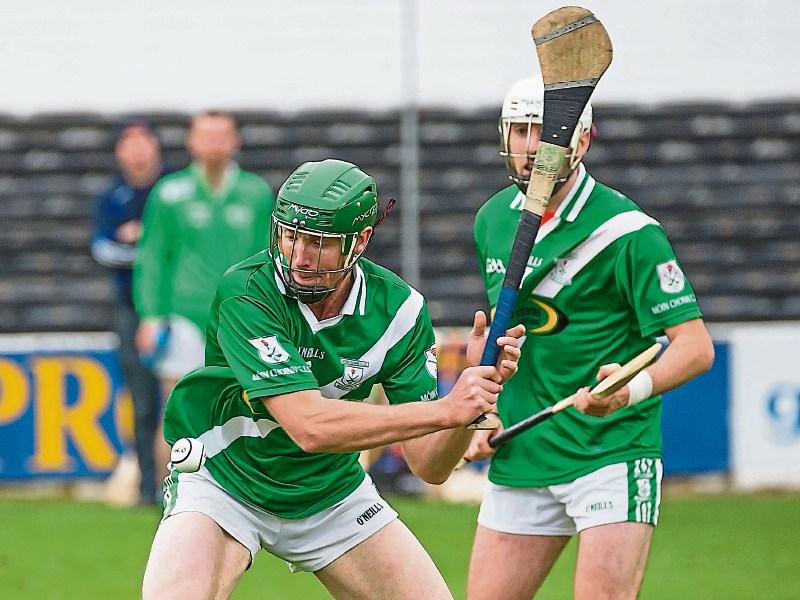 Something that was in the realm of a  dream  a few short months ago has become a reality for the proud men from famed Mooncoin.

The game was played in the superb grounds of St Loman’s Park, Trim.

The weather was far from  ideal, however, with rain falling and mist hanging during most of the game, which made the  underfoot conditions treacherous.

It was Mooncoin who made the better start. A free in first minute was sent between the posts by Kevin Crowley.

Lámh Dhearg equalised two minutes later from a placed ball by Patrick Cunningham. The game then burst into life.

Cormac Daly blasted a clearance out of defence for the men in green. The ball  was picked up by  Seán Walsh,  who thundered down the centre before shooting.

The ball dropped short and was gathered  by the Antrim goalkeeper, Paddy Joe Herron. His attempted clearance was blocked by Eamon  Hennebry and the incoming Michael Grace stuck the ball into  the back of the net.

Less than a minute later it was the same trio involved in Mooncoin’s second goal. Seán Walsh hand-passed to  Hennebry, who laid the ball off to Michael Grace, who sent it  to the top of the net.

With just six minutes gone, Mooncoin were 2-1 to 0-1 up and looking good.

However, after such an explosive start, Mooncoin’s scoring dried up. They would not score again for 20 minutes.

In the meantime both teams were guilty of missing  scoreable chances. Patrick Cunningham added another point from a placed ball for the men from the Saffron county in the 11th minute.

Seamus Kearns, Niall Mackey and especially Eoin Henebery were doing Trojan work in defence for Mooncoin, although the team made no gains on the scoreboard.

It was Cunningham again who added another free to his tally in the 18 minute. His teammate Terry McCrudden added another, their first score from play.

Mooncoin finished the half with a badly needed scoring burst.

Seán Walsh pointed from the half forward line in the 26th minute. John Fitzgerald followed  a minute later with a beautiful point from a tight angle, nearly at the corner flag.

Lámh Dhearg centre-back Michael Herron pointed a long distance free after that. His colleague  Joe Doone had a chance of a goal at the end of normal time, but the shot was ably dealt with by Mooncoin keeper, Eoin Purcell.

The weather  was causing all sorts of problems for both teams, although neither  would be happy with their wide count, or the number of shots that dropped short.

Kevin Crowley started the second the half with a point from a free for the south Kilkenny men.

Cunningham did likewise for the opposition. Following a breaking high ball in front of goal, Michael Grace looked certain of getting his hat-trick only for his shot to be saved by Lámh Dhearg goalkeeper, Paddy Joe Herron.

Ray Wall then burst into game for Mooncoin. Following a pass from Eamon  Hennebry, he split the uprights in the 11 minute to push Mooncoin six ahead.

A few minutes later he scored another from a huge distance. Midway through the half Mooncoin got their third goal.

Following a long clearance from defence, the ball broke close to the Mooncoin square and was pounced on by John Fitzgerald, who hit a rasper across the goal and  buried the ball  in the top corner.

This score left 13 points between the sides, and it was too much of a mountain to climb for the Antrim men.

Kevin Crowley added a point from play in the 52nd  minute after a nice passage of play.

Cunningham shot  another point  from play for Lámh Dhearg.

In the last quarter, the men from the north tried in vain to hit the Mooncoin net  with close range frees, but to no avail.

Mooncoin enjoyed  a late flourish to seal a comprehensive  victory.

Following some  great build-up play from Eamon  Hennebry and captain Ethan Ryan, John Fitzgerald blasted home his second goal  in injury-time. Eamon Hennebry added the icing on the cake with a goal in the 62nd minute before the referee blew the final whistle.

Best for Mooncoin were  Seán Walsh, Ray Wall (especially in the second half), and, of course, Eoin Henebery, who seems to be getting better as the season   progresses.

Although conditions did not suit anyone, Mooncoin will rue their wide count of 18. Lámh Dhearg were missing some key players through suspension.

While never reaching their potential, they had real battlers  in Domhnall Nugent, Patrick Cunningham and Michael Herron at centre-back.

The pinnacle of any player’s career should be  to play in Croke Park.

This Mooncoin group will achieve that goal when they take on Mayfield of Cork on February 18.

For supporters the next three weeks will be full of anticipation and excitement as they know their team will do them proud on what will be  a special and historical occasion for the club.