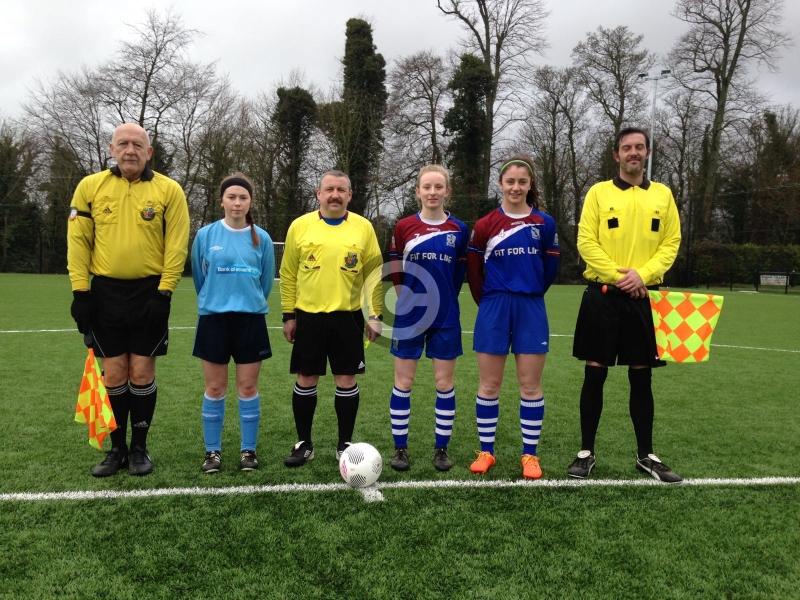 The captains with match officials before kick-off. Photo: FAI Schools

A brace of first half goals saw the Presentation Kilkenny's FAI Schools Girls' Senior Cup dreams end one agonising step short of the final.
One week after winning the Leinster title the Kilkenny side travelled to Cahir Park with national honours on their mind, but a strong Colaiste na Trocaire team ended their hopes at the semi-final stage.
The Limerick girls had pace and power in their ranks and used both qualities to take a 22nd minute lead. Phoenix Mulcaire-Shire did the damage, chasing down a long diagonal ball before lashing it to the Pres net.
The Kilkenny girls were under the cosh in the opening half, as Colaiste pushed for more goals. Their efforts paid off when, three minutes from half-time, they doubled their lead. Eadaoin Lyons showed strength to fight her way down the right, then cut in to fire a low shot inside Pres goalkeeper Cliodhna Kenny's near post.
The Pres fought back in the second half. Led by Hannah Scott, Aobha O'Gorman and Lizzie Buckley they pressed for a way back into the game, but Colaiste na Trocaire wouldn't budge.
Pres Kilkenny - Cliodhna Kenny; Aobha O'Gorman, Rebecca Roche, Neasa Galwey, Ciara Morrissey; Cliodhna Donnelly, Ciara Delaney, Hannah Scott, Lizzie Buckley; Leanne Murray (Jean de Tougeot, 41 mins), Lauren Valentine.
Colaiste na Trocaire - Noirin Lenihan; Rachel Anderson (Joanne Foley, 57 mins), Kate Geary, Siobhan Tangney, Sarah Fitzgerald; Grace Mullane (Anne Mullane, 79 mins), Tara Coleman, Claire Gohery, Anna Shanagher (Maeve Power, 79 mins); Phoenix Mulcaire-Shire (Orla O'Doherty, 72 mins), Eadaoin Lyons.
Referee - John Lyons (TSDL).