Dundalk tie a dream for ’Town 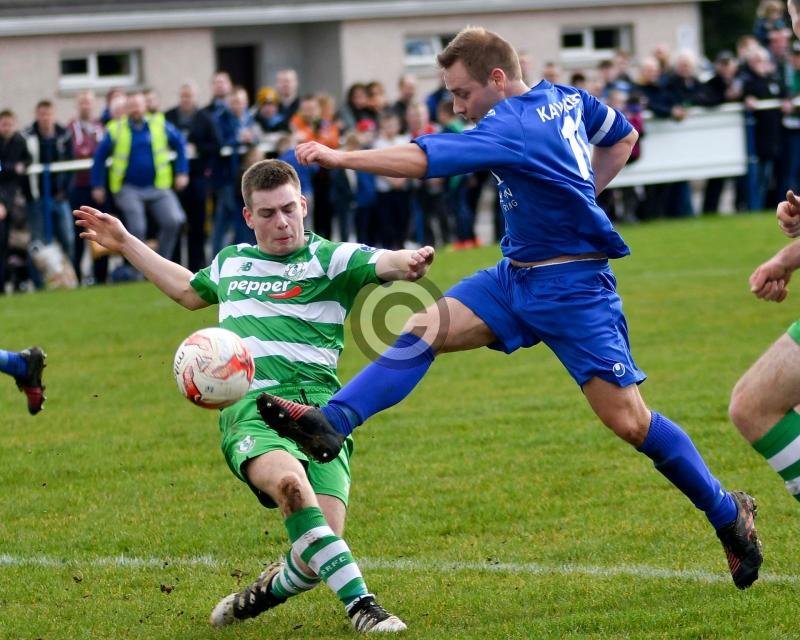 Fresh from beating Shamrock Rovers in the Leinster Senior Cup, Andy Kavanagh and his Thomastown United team-mates will now play Dundalk in the next round. Photo: Michael Brophy

A magical season keeps delivering so many dreams it’s safe to say Thomastown United won’t want to wake up any time soon!
Just weeks after shocking the football world by beating Shamrock Rovers, Kilkenny’s 'David' have been paired with another sporting 'Goliath' - mighty Dundalk.
The clubs will meet in the quarter-finals of the Leinster Senior Cup, but there could be a twist. Thomastown had been drawn away, but they could yet up end up bringing the Irish champions to United Park!
“The management team and players will have a meeting to discuss whether we can have the game played in Thomastown,” said United chairman Paul Doyle. “If they ask for it, we will certainly send a letter to request a venue reversal.
“If the lads ask us to send the letter we will,” he said. “The committee are 100% behind their decision. But, if the players want to take the opportunity of playing in Oriel Park, then we’d go for that.”
The club is bubbling over at the thought of taking on Stephen Kenny’s side, who shot to international fame when they reached the group stages of this season’s Europa League.
“We were holding a committee meeting at the club when the video of the quarter-final draw went live,” explained Doyle of the moment when United learned their 'Cup fate. “When our name came out against Dundalk the whole club erupted!
“This was exactly what we wanted,” he added. “Once we got Dundalk we didn’t care if we were drawn home or away. For our players to be able to say that they took on Shamrock Rovers and Dundalk in the one season is incredible.”
On A High
The club is still on a high after that famous win over Shamrock Rovers, a club who were described as the ‘Manchester United of Ireland’ when they came to United Park for the fourth round clash.
If that game was huge for Thomastown, then taking on of a side who played in this season’s Europa League is even bigger.
“If Rovers were the Manchester United, then Dundalk are the Barcelona of Irish teams,” said the chairman. “This will be an even bigger challenge.”
The club is still basking in the glow of their 1-0 win over Shamrock Rovers, a day when a massive crowd flocked to United Park for the occasion.
“The Rovers game was massive for us,” said Doyle. “There were people who came out to support the team that we know will be back for games again.
Out Of This World
“It was an ‘out of this world’ opportunity for the players to get the chance to take on Shamrock Rovers,” he added. “Now they have another huge chance against Dundalk.”
The day was a huge success for Thomastown, and not just on the field. The win was a reward for the hard work of a committee and backroom team who gave their all to ensure the club enjoyed a special moment in time.
“What makes the occasion all the more special is that not one member of the committee has a family member playing,” the chairman explained. “They’re doing this for the love of their club. Now our prize is to see our club take on Dundalk.”
And that means a whole new generation of football fans have some new heroes to follow - and they were quick to show their love after the game!
“There was a group of young lads hanging around the dressing-room after the game waiting for autographs,” Doyle explained. “I asked them to move back a little, to give the Shamrock Rovers players room to come out so they could sign autographs in the extra space. All the lads said ‘we don’t want their autographs - we want the Thomastown players!’.”