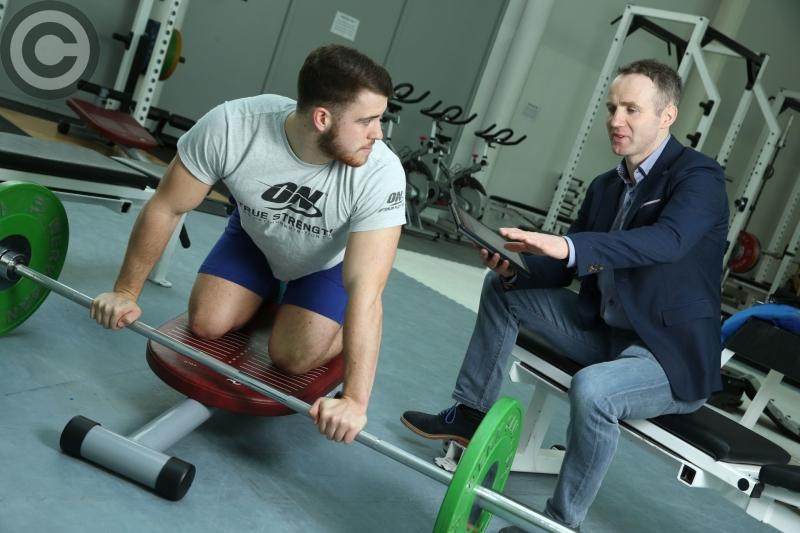 Noel Doherty from Galmoy, the inventor of the Hamstring Solo range, shows Conor Tuohy how the machine can help him in the gym at IT Carlow. Photo: Finbarr O'Rourke

A Kilkenny invention is attracting the attention of giants in sport across Europe.
Euro rugby champions, Saracens are sold on the idea, as are Premier League club West Bromwich Albion and at least four others top soccer clubs in England are showing interest.
The invention is an innovative exercise aid that can help prevent hamstring injuries in athletes.
Called the Hamstring Solo-Pro - there is an advanced version, the Hamstring Solo-Elite - it is the brainchild of Galmoy, Co. Kilkenny man Noel Doherty.
Mr Doherty put his mind to the challenge in 2013 when trying to recover from a hamstring injury that interrupted his inter-county hurling career.
Endorsed
Among those who have endorsed the product is John Kiely, senior lecturer in Elite Performance, Institute of Coaching and Performance at the University of Lancashire, UK.
He is a former head of S and C (strength and conditioning) for UK Athletics, S&C to Olympic medallists and World champions, Support S&C for Irish rugby through two winning Six Nations Championships.
“Traditionally a limitation in the field of hamstring conditioning and rehabilitation has been the lack of functional tools capable of quickly and accurately assessing eccentric and isometric strength and determining the extent of left-to-right strength imbalance,” Kiely explained.
In the dark
“As a consequence when training or rehabilitating hamstrings we have, until now, operated in the dark without the essential monitoring information we need to evolve optimally efficient hamstring conditioning processes.
Accurate date
“The Hamstring Solo Elite enables us to quickly and easily capture accurate data and presents this information instantly to coach, S&C and medical staff in a clear and readily accessible format.”
Hamstring muscle strains are the most common cause of injury and lost training time in sport.
The invention has already won over fitness chiefs in the Aviva Premiership Rugby, including current European champions Saracens RFC, Leicester Tigers and Worchester Worriers.
League of Ireland club Bray Wanderers have signed a three year contract to use the Hamstring Solo Elite, while players in Tyrone, All-Ireland football and hurling champions, Dublin and Tipperary have also been tested, plus a host of other counties, including the Kilkenny squad.
Needed help
Doherty found that to do the regime of exercises needed to correct damaged or torn hamstrings required the help of a second person.
The Hamstring Solo range sits close to the ground, eliminates the need for a second person to assist, utilises the person’s own body weight and facilitates a variety of isonmetric, eccentric and concentric exercise options that can be performed safely at different velocities, angles and muscle lengths.
All are performed in the safest optimal position.
Enterprise Ireland have backed the on-going development of the company, Nj Doherty Solutions Limited which is based in Newtown, Thomastown, Co. Kilkenny.
Currently the patent is pending on the Hamstring Solo and Elite.
Software
The Hamstring Solo range is manufactured in Portlaoise, while companies in Limerick and Galway produce the software and data collection apps.
Mr Doherty and his team have worked with and tested the GAA players in Dublin, Kilkenny, Tipperary, Limerick, Tyrone and Westmeath to help identify players at risk of suffering hamstring injuries.
The first Solo Elite unit produced was used by the Irish rugby team at the 2015 World Cup.