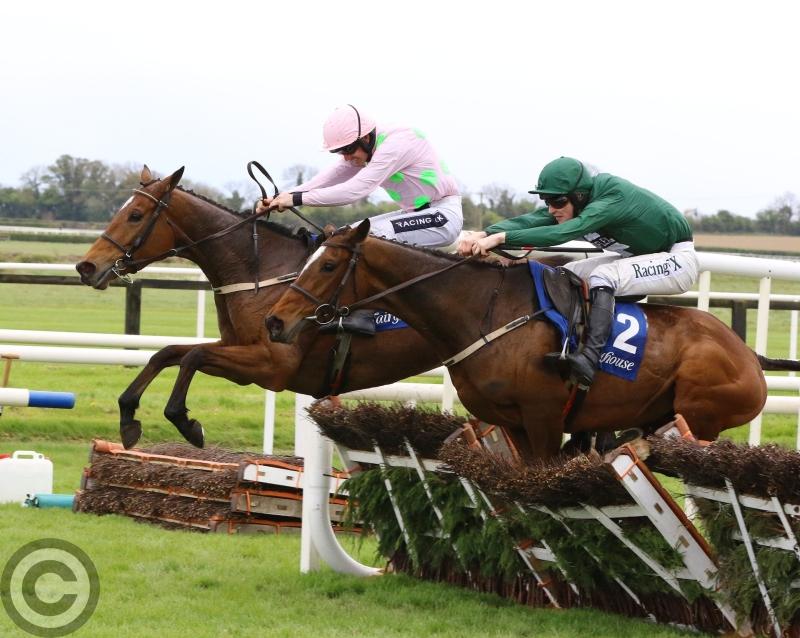 Augusta Kate and David Mullins jump the last on their way to beating Let’s Dance and Ruby Walsh in the Irish Stallion Farms EBF Mares Novice Hurdle at Fairyhouse on Easter Sunday.

The race to become champion trainer, one of the stories of the 2016/2017 National Hunt season, took another twist as Willie Mullins enjoyed mixed fortunes at Fairyhouse on Easter Sunday.
Mullins, who is bidding to rein in Gordon Elliott, made a brilliant start to the day as he landed a 1-2 in the Grade One Irish Stallion Farms EBF Mares Novice Hurdle Championship Final.
His 8/1 shot Augusta Kate bounced back to form under David Mullins to beat the Ruby Walsh-ridden 8/13 favourite Let’s Dance.
However, Mullins lost out as another of his Cheltenham Festival winners, Yorkhill went down by a neck to Noel Meade’s Road To Respect in the Grade One Ryanair Gold Cup Novice Chase.
Bryan Cooper got the well-supported 7/2 chance, a winner at Cheltenham last month, home ahead of the 4/7 favourite which jumped badly to his left after pulling his way to the front at the fourth fence.
Meade landed a second notable success when the Danny Benson-ridden Red Jack impressed in the valuable Tattersalls Ireland George Mernagh Memorial Sales Bumper at odds of 11/8 favourite.
The session had begun well for punters as the Tony Martin-trained 11/10 favourite Tudor City won the opening maiden hurdle under Davy Russell who went on to complete a double when 8/1 chance Hurricane Ben won the novice handicap chase.
Killaro Boy won the rated novice chase in great style at odds of 6/1 under Barry Browne. Another claiming rider to visit the winners’ enclosure was Andrew Ring who partnered Fridaynightlights to win the novice handicap hurdle for Gordon Elliott.
Blackmore Double
Rachael Blackmore all but secured the title of Champion Conditional rider with two winners at Cork on Easter Sunday.
The Killenaule jockey moved on to the 31-winner mark for the season and leads both Donagh Meyler and J.J. Slevin by seven after winning the 2m maiden hurdle on 7/4 favourite Look Closer and the beginners’ chase on 9/2 chance Static Jack. Both winners are trained by Ellmarie Holden.
Adrian Heskin teamed up with Andrew McNamara to win the Grade 3 Vincent O’Brien Centenary Chase with 9/4 chance Val De Ferbet which easily accounted for evens favourite A Toi Phil. It was McNamara’s biggest success as a trainer to date.
Midleton trainer Johnny Hurley recorded his first winner when 7/1 chance Sunchyme won the 3m maiden hurdle in the hands of Danny Mullins.
Patrick Mullins landed a valuable success as he aims to retain his Champion Amateur crown when taking the bumper on 4/6 favourite Minella Beau, which is trained by his father Willie.
Harrington’s Treble
Jessica Harrington continued her fine run of form with a treble on the all-Flat card at Cork on Saturday.
Two of her winners were owned by her daughter Kate, who was on hand as 9/1 chance Lady Derrynane got Tom Madden off the mark for the season in the mile handicap.
In the same colours, 5/1 chance Caherdaniel took the 10f maiden under Colm O’Donoghue. The Cork rider recorded a second winner and Harrington’s third as 9/4 Light That took the 10f handicap in gutsy fashion.
Dermot Weld and Pat Smullen were the other big winners on the card as the talented Zhukova made a winning return in the Listed Noblesse Stakes. She scored at odds of 1/3 favourite and will certainly be stepping back up in class after her comfortable two length success over Henry de Bromhead’s Island Remede.
Ger Lyons and Colin Keane captured the opening 8f maiden with 4/1 chance Gold Spinner and at double those odds, Edward O’Grady’s Roconga won the 10f handicap under Seamus Heffernan.
There was a 12/1 winner of the concluding 7f handicap as Leigh Roche partnered Aspen Belle to win for Navan-based trainer Pat Martin.
O’Brien Treble
Aidan O’Brien dominated at Dundalk on Wednesday with three winners, ridden by three different jockeys.
Seamus Heffernan was the man on board as War Secretary made a winning return to action in the Listed Avenue Inn, Dundalk Patton Stakes.
Sent off a 5/2 chance, the son of War Front beat the Ger Lyons-trained Noivado by a neck with the previously unbeaten Ambassadorial two lengths away in third place.
O’Brien got a second winner when Key To My Heart made all the running under his daughter Ana to take the fillies’ maiden at odds of 11/4. The champion trainer’s treble was completed when Donnacha O’Brien won the 10f handicap on 4/1 chance San Remo.
On what was a good night for the O’Brien family Donnacha has initiated a double for himself when he landed the 5f maiden on 11/10 favourite True Blue Moon which was winning for Joseph O’Brien.
Andy Slattery took the 5f three-year-old handicap with the Declan McDonogh-ridden 8/1 shot Red Sabor while at the same price, the Matt Quinn-trained Shelbe won the 5f handicap under Kildare apprentice Andrew Breslin.
Johnny Levins and Donagh O’Connor took the claiming race with 11/4 shot Burn The Boats which was claimed by James Mescall and will now be trained by Johnny Feane.
Jim Bolger and Kevin Manning rounded off the session when landing the concluding handicap with the gambled-on Locus Standi. A 6/1 chance overnight, the five-year-old ran out a comfortable winner at odds of 2/1 favourite.
Seabass
Seabass, third under Katie Walsh in the 2012 Grand National, has died at the age of 14 following a suspected heart attack.
The former Ted Walsh-trained chaser was spending his retirement with 26-year-old Papillon, the trainer’s 2000 Grand National hero, and 24-year-old multiple chase winner Rince Ri at Walsh’s stables in Kill. He won seven races, six of them over fences, and close to €275,000 in prize-money.
Racing Diary
Tomorrow (Thursday) - Tipperary (first race 5.10pm). Friday - Kilbeggan (5pm), Dundalk (5.55pm). Saturday - Limerick (1.45pm). Sunday - Navan (2.15pm).