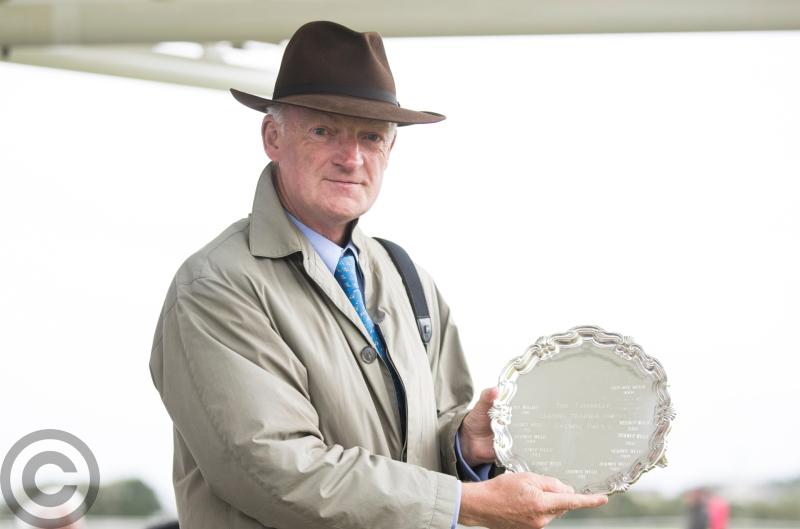 Mullins, who won the title for the second year running, secured his crown with a final day treble at Ballybrit on Sunday.

The first winner came in the shape of 11/4 favourite Ben Button which easily landed the 3m handicap hurdle under Ruby Walsh. Paul Townend did the steering as 9/4 chance Arbre De Vie readily accounted for his stable companion and 4/9 favourite Shaneshill in the 2m6f conditions’ chase. The Mullins three-timer was completed when Ansi Va La Vie, the 4/7 favourite, won the bumper under his son Patrick.

Baraweez won the race for Ellison in 2014 and again in 2015 and he took second place this time with stable companion Be Kool third.

Tony Martin gained his first success of the week when the Colin Keane-ridden 11/4 favourite Dara Tango won the 14f handicap. Martin ran six horses over the week that either finished second or third in their races. Jockey Ryan Treacy has had no luck with injury throughout his career but he showed yet again that he’s one to keep an eye on when landing the handicap chase on the Jessica Harrington-trained 12/1 chance Neverushacon.

John Joe Walsh is quite possibly the longest serving trainer in the country and he recorded his most valuable success since taking out his licence in the very early 1960s when the Rachael Blackmore-ridden Ballyegan Hero won a thrilling renewal of the €100,000 Galway Shopping Centre Handicap Hurdle on Saturday.

The 16/1 chance edged out Mine Now by a nose to land the race of the day for the Doneraile trainer, his second winner of the week for owner Tom O’Brien.

Walsh’s first winner as a trainer (he rode it himself) was Grub Stake at Clonmel on March 7, 1963. It is believed he first took out his trainers’ licence in either 1961 or 1962.

Dermot Weld and Bryan Cooper got off the mark for the festival when landing the maiden hurdle with 13/2 chance Adyoun, Cooper’s first Galway festival winner since piloting the Dessie Hughes-trained Sarteano to victory in 2011. Aidan O’Brien and Seamus Heffernan combined to win the 8f maiden with 2/9 favourite Amedeo Modigliani and a second odds-on winner was 4/7 favourite True Self which landed the bumper for Willie Mullins and his son Patrick.

Deep Breath gave Joe Murphy a second winner of the week when taking the nursery handicap under Pat Smullen at odds of 3/1 while 20/1 chances Bubbly Bellini and Athenry Boy won the 7f and 12f handicaps for Ado McGuinness and Colin Keane and Jim Gorman and Wayne Lordan respectively.

The Aidan O’Brien-trained Winter, winner of the Coronation Cup as well as the English and the Tattersalls Irish 1,000 Guineas this season, added a fourth Group 1 to her collection with a comfortable victory in Thursday’s Nassau Stakes at Goodwood.
Ridden by Ryan Moore, who won the race last year on the now retired Minding, also trained by O’Brien, Winter ran out a good winner at odds of 10/11 favourite.

“She’s made the transformation from the first half into the second half of the season, and she's won well on the ground, which is like Winter jumping ground,” said O’Brien. “It’s a different level of fitness you need for it, but she’s obviously very good.”