Handball: It was celebration time for Aoife and Ailish 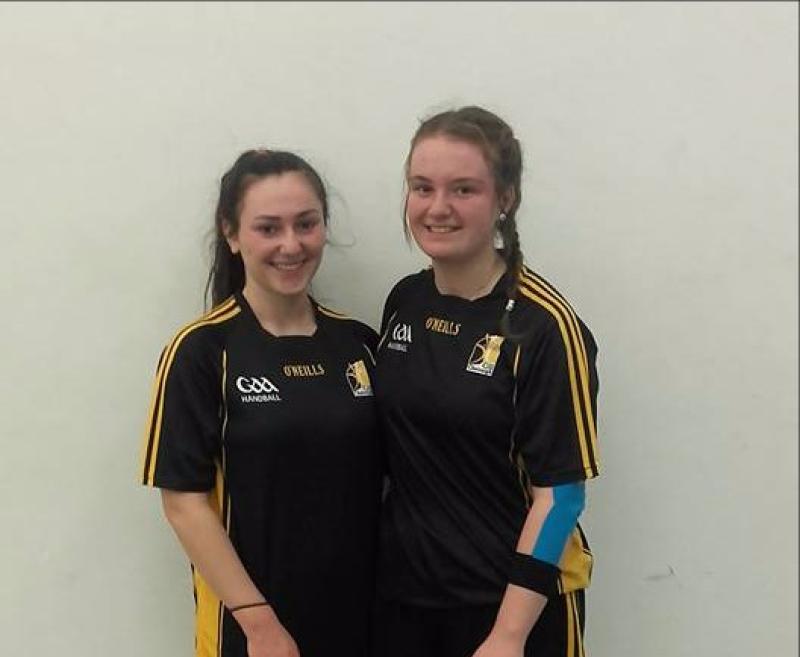 In Crinkle on Saturday the All-Ireland 60x30 final of the intermediate ladies doubles championship was won by Kilfane duo, Aoife Holden and Ailish O’Shea.
This was the only success of the weekend enjoyed by Kilkenny, who lost out in three other finals against Munster and Ulster opposition.
Kilkenny players travelled to Crinkle, Offaly and Kells, Meath to contest three All-Ireland finals overall.
At the Offaly venue there was a two match programme involving Kilkenny ladie, plus Clare and Roscommon.
In the intermediate doubles decider, Kilfane duo Aoife Holden and Ailish O’Shea came up against the fancied Aoife and Fiona Tully, Roscommon.
The girls are familiar foes over the last few years and this was evident in the opening two games, which were equally shared.
The early momentum was with the Kilkenny girls in the third game. This swung as the Westerners got 19-16 ahead, and were on the verge of victory.
However, Aoife and Ailish were not to be denied. They dug deep to snatch a fabulous 21-19 win to secure their place in the senior ranks next season.
In the first match at Crinkle, Dearbhail O’Keeffe (Kilfane) and Sorcha Delaney (Clogh) were defeated by a very impressive Clare pair, Catriona Millane and Ella Donnellan, in the minor doubles decider, losing 21-10, 21-4.
Earlier on Saturday in Kells, Kilkenny contested the under-21 doubles final against Tyrone.
Brian Mahon (Clogh) and Emmet Landy (Windgap) came up against the strong pair of Sean Kerr and Ryan Mullan, and they were well beaten 21-11, 21-6.
Last week Philly Parsons (O’Loughlin’s) and Johnny Brennan (Mothel) came out on the wrong side of 14-21, 21-14, 21-16 result in the Emerald Masters doubles final against Limerick’s Tom O’Brien and Donal O’Connor.
Juveniles
This Sunday the All-Ireland 60x 30 juvenile finals are scheduled for venues in the South East and Kilkenny will have the opportunity to claim honours in four grades at Garryhill.
Representing the county will be Billy Drennan (Galmoy) in boys under-14 singles; Amy Brennan (Clogh) in girls under-14 singles; Jack Holden (Kilfane) in boys under-16 singles and in girls under-16 doubles, Roisin O’Keeffe (Kilfane) and Noelle Dowling (Mothel) will fly the colours.
In the Leinster team events played on Friday, there was success for the boys under-12/13 and under-16/17 when defeating Wexford.
Defeat was endured by the under-14/15 team who lost to the Slaneysiders.
The teams were - under-12/13, Kyle Jordan, Conor Holden and David holden (all Kilfane), Harry Delaney (Kells), Michael Brennan and Luke Flannagan (Clogh), Joseph Prendergast (Kells) and Ronan O’Brien (Windgap).
Under-14/15 - Sean Barron. Niall O’Brien Adam O’Shea (Windgap), Jamie Maher (Clogh), Tom Holden (Kilfane), Cillian Lawerence (Kells) and Jay McGuire (Galmoy).
Under-16/17 - Conor Drennan (Galmoy), Kieran O’Neill (Goresbridge), James Love (Clogh) Tom Caroll (Talbot’s Inch) and Sean Fitzpatrick (Mullinavat).
Collection
This Sunday, Kilkenny Handball Board will hold their annual collection at the county hurling semi-finals in Nowlan Park. All clubs are expected to provide volunteers as this is the main fund raising event on the local handball calendar.
Fixtures
All-Ireland juvenile 60x30 finals, Sunday at Garryhill, Carlow (11am) girls under-14D, Mayo (Hazel Finn/Lucy Brennan) v Clare (Chloe Philpott/Ellen Casey); under-15S, Kildare (Abby Tarrant) v Monaghan (Louise McGinnity).
Boys under-15S, Roscommon (Liam Egan) v Tipperary (Cormac Doheny); under-14S, Kilkenny (Billy Drennan) v Tipperary (Rory Grace).
Girls under-14S, Kilkenny (Amy Brennan) v Tyrone (Cloda Nic Con Midhe); under-16D, Kilkenny (Noelle Dowling/Roisin O’Keeffe) v Tyrone (Caitlin Conway/Elizabeth McGarvey)
Boys under-16S, Kilkenny (Jack Holden) v Cork (Darragh Ducey) Castlebridge, Wexford (11am); under-15D, Wexford (Diarmuid Moore/Dean O’Neill) v Tyrone (Brian McAleer/Jack Darcy); under-14D, Wexford (Mark Doyle/Ben Keeling) v Cork (Kealan Murphy/Gearoid Healy); under-17D, Wexford (Robert Cogley/Ciaran Power) v Cork (Niall Delaney/Brooklyn Hickey); girls under-17S, Wexford (Cora Doyle) v Limerick (Aisling Shanahan); under-17D, Wexford (Clodagh White/Lucia Merrigan) v Limerick (Keri Murphy/Ciara McCarthy); boys under-17S, Wexford (Colm Parnell) v Cavan (Conor Owens).